#KillerCuomo Should Be In Prison for His COVID-19 Lies

Dixie Cup said:
Just got my shot and will be notified within 4 - 16 weeks of the 2nd shot. 4 to 16 weeks!! Seriously? Based on what - availability? Pretty broad timeframe.
Click to expand...

I guess there are so many unknowns what with the variants and the fact they just got things sorted out with AstraZeneca and we still don't know what's going on with Johnson & Johnson. Anyway the good news is we are picking up speed.

They're on to Gov. Murphy of NJ as well

WATCH: After evading press for months, Cuomo speaks on harassment claims: ‘I Didn’t Do Anything Wrong’​

Aides to Gov. Andrew Cuomo went to extraordinary lengths for months to block the true number of nursing-home deaths related to COVID-19 in New York from being released to the public, including forbidding health commissioner Howard Zucker from releasing the death toll, The New York Times reported Wednesday citing newly discovered documents and interviews.

The report claims that the Cuomo administration withheld a scientific paper that included the most accurate numbers, an audit of the numbers by a top Cuomo aide that was completed months before it was released and two letters drafted by the Health Department meant for state legislators that were never sent.

The period in which the material was withheld from state lawmakers and the public coincided with when Cuomo suggested and eventually wrote a book about his leadership during the outbreak of the novel coronavirus.

Critics have charged that it was Cuomo’s policy at the start of the outbreak in March requiring nursing homes to re-admit patients that had been hospitalized for COVID-19 which resulted in 50% more deaths, more than 9,000 in total, than originally reported before the policy was rescinded in May.

Cuomo initially claimed that his policy was based on guidance from the Centers for Disease Control and Prevention, but that policy said patients could be readmitted only if they could be sequestered in a separate area from the general population.....Read more
Reactions: Danbones

Prosecutors reportedly requested communications pertaining to the book including contracts and material utilized to pitch the work to publishers.

Expect something different from a democrat?
Reactions: Dixie Cup and Twin_Moose

DaSleeper said:
Why isn't Cuomo being impeached???
Click to expand...

Because he's not a president?

Don't court proceedings still have to be conducted c/w prosecutor and defense?

JLM said:
Because he's not a president?
Click to expand...

I think Americans can impeach more than presidents.
Reactions: Dixie Cup and Twin_Moose

Taxslave has it right. He's a Democrat so there won't be any consequences i.e. no consequence for the Ted Kennedys or the Clintons.

I will be surprised if there are consequences, but we'll see - not holding my breath.
Reactions: Twin_Moose

Dixie Cup said:
Taxslave has it right. He's a Democrat so there won't be any consequences i.e. no consequence for the Ted Kennedys or the Clintons.

I will be surprised if there are consequences, but we'll see - not holding my breath.
Click to expand...

Right now Democrats have control of house and senate. The parties rarely convict themselves. In 2022 if both flip, they may get an impeachment going. If only one flips, then it will be the same as with Clinton or Trump -- an impeachment without conviction.
Reactions: Dixie Cup and Twin_Moose

Article content
Melissa DeRosa, secretary to the governor, was linked in the report to efforts to cover up the governor’s actions and retaliate against one of his accusers. Her name was mentioned 187 times in the 168-page report that was released on Tuesday.

“Personally, the past 2 years have been emotionally and mentally trying. I am forever grateful for the opportunity to have worked with such talented colleagues on behalf of our state,” DeRosa said in a statement.

The report found that Cuomo groped, kissed or made suggestive comments to 11 women in violation of the law, prompting local prosecutors to launch a criminal investigation and re-igniting calls for him to resign or be impeached.

Cuomo has thus far resisted widespread calls for him to step down, including from fellow Democrats such as President Joe Biden, but he could soon face impeachment and removal from office by state lawmakers.

Meanwhile, a former assistant who filed a criminal complaint against Cuomo last week on accusations he groped her in the Executive Mansion in Albany is speaking publicly for the first time in a televised interview to be broadcast on Monday, saying the governor “needs to be held accountable.”


Brittany Commisso, one of the 11 women Cuomo is accused of sexually harassing, was identified only as “executive assistant #1” in the report.

She told state investigators that Cuomo fondled her breast on one occasion, the most serious allegation the governor faces. She also said he rubbed her backside while taking a photo.

Article content
Last week, she filed a criminal complaint with the Albany sheriff’s office. The sheriff, Craig Apple, told reporters on Saturday his agency and the county district attorney’s office would conduct a thorough investigation before determining whether a criminal charge is supported.

In an interview with CBS News and the Albany Times-Union that is scheduled to air on Monday morning, Commisso said she filed the report to hold Cuomo responsible for his actions.

“What he did to me was a crime,” she said in an excerpt released by CBS on Sunday. “He broke the law.”

Cuomo has denied any wrongdoing, though he has acknowledged that his efforts to be affectionate with people he encounters may have made some people uncomfortable.

His lawyer, Rita Glavin, told reporters on Friday that Commisso’s account was fabricated, citing emails and other documentary evidence she said undermines her story.

In another excerpt released by CBS, Commisso said occasional hugs and kisses on the cheek escalated when one time Cuomo quickly turned his head and kissed her on the lips.

Yet she “didn’t say anything” at the time, Commisso said. 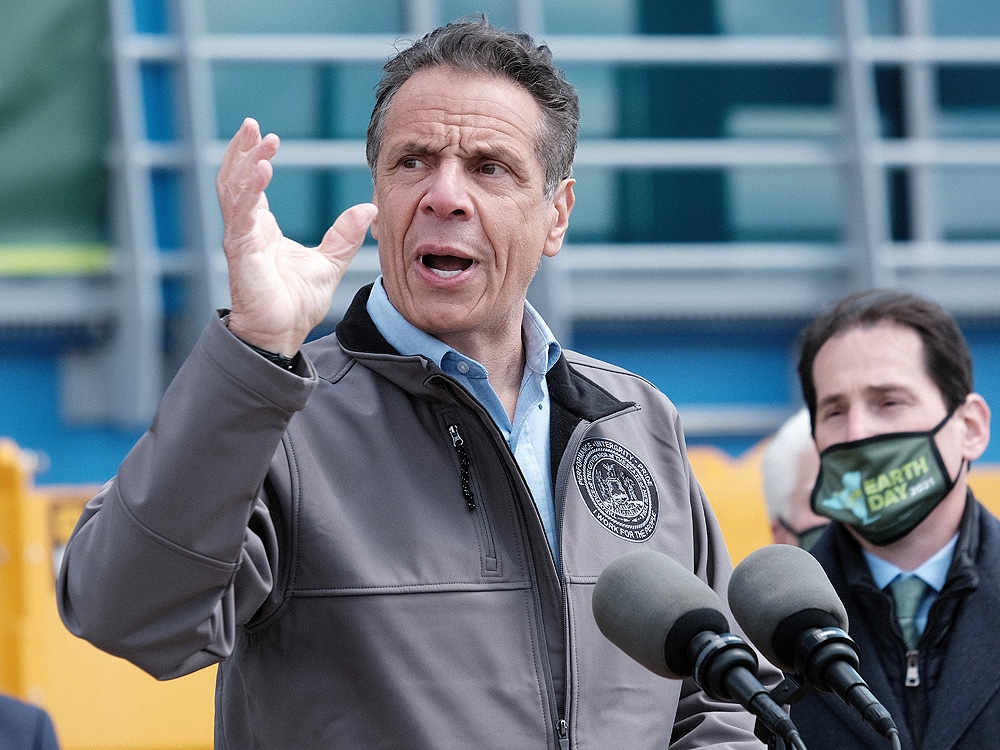 Article content
Brittany Commisso reported Cuomo to the Albany County sheriff’s office last week, days after an investigation by the state attorney general’s office found she was among 11 women whom the governor had allegedly sexually harassed.


The Democratic governor has denied wrongdoing even as calls for him to resign have grown, including from prominent fellow Democrats such as President Joe Biden.

The state legislature has been conducting its own inquiry into his actions and could decide to impeach him.

The New York State Assembly’s Judiciary Committee, which is reviewing the evidence from the state attorney general’s investigation, will issue a recommendation on whether the legislature should proceed with impeaching Governor Cuomo within “several weeks,” Committee Chair Charles Lavine said on Monday.

Article content
Commisso, who was identified only as “executive assistant #1” in the report, told CBS News: “The governor needs to be held accountable … What he did to me was a crime. He broke the law.”


Commisso told investigators that Cuomo had fondled her breast in the Executive Mansion in Albany, the capital of New York state, last November.

A lawyer for the governor, Ruth Glavin, told reporters on Friday that Commisso’s account was false, citing emails and other records that she said showed Commisso was not alone with Cuomo on the day in question and never showed any indication that something was amiss.

Craig Apple, the Albany County sheriff, said on Saturday that the allegations, if substantiated, could lead to criminal charges. He said his office and that of the Albany district attorney would oversee a thorough investigation.

Article content
In the interview, Commisso also described how Cuomo’s advances grew bolder over time and explained that she was afraid to come forward due to his power.

“People don’t understand – it’s the governor of the state of New York. He is a professional fighter,” she said. “It hasn’t been easy.”


Lavine, chair of the state assembly’s judiciary committee, said on Monday that the committee would hold two executive sessions to discuss its ongoing impeachment inquiry of Cuomo on August 16 and August 23, followed by at least two public hearings, where experts will be called to testify on sexual assault and harassment and the impeachment process itself.

The Committee will recommend whether to impeach Cuomo after fully reviewing the evidence, he said.

Article content
“We anticipate that this process will be concluded very soon … and when I say very soon I’m speaking about several weeks,” Lavine told reporters.

Lavine defended the process’ length, saying that lawmakers “owe it to the people in the state of New York” to examine the evidence in the attorney general’s report before moving to impeach.

Support for Cuomo seems to be slipping at a faster pace. On Sunday, a top aide to Cuomo resigned in the wake of the reported allegations.


Prominent litigator Roberta Kaplan, who represented DeRosa, resigned on Monday as chair of anti-bias and harassment group Time’s Up’s board of directors, less than a week after investigators detailed her role in responding to sexual harassment claims against the governor.

Assembly Speaker Carl Heastie reiterated on Monday that most members of the Democratic-led body have “no confidence in the ability of the governor to remain in office.”

“That’s the universal sentiment that we have,” Heastie said. 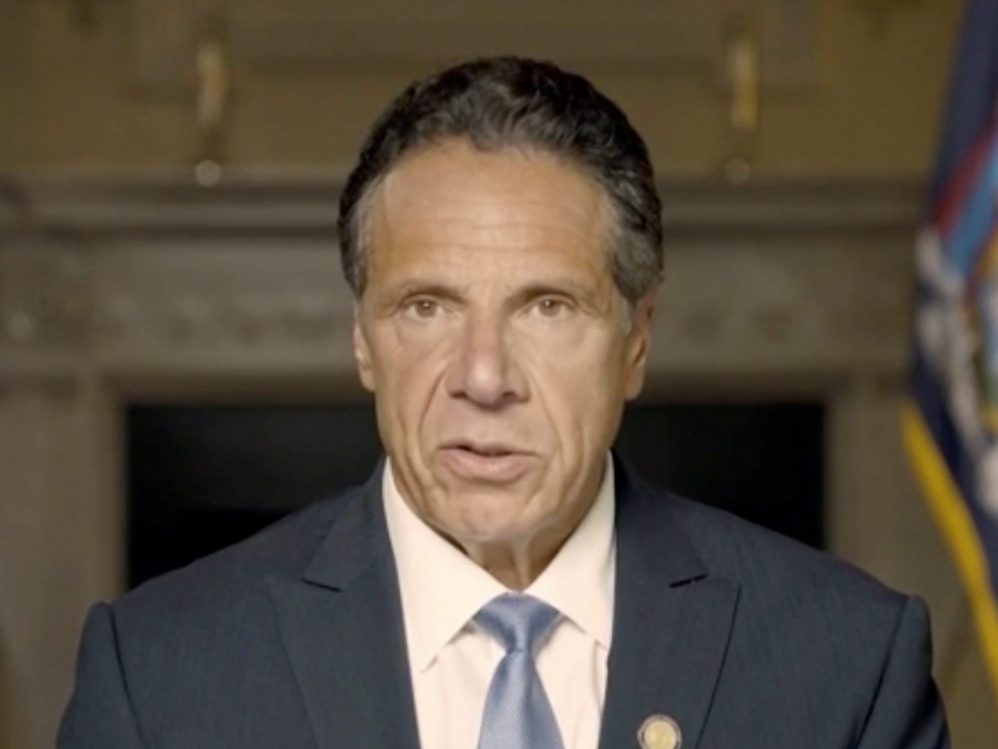 A former aide who filed a criminal complaint against New York state Governor Andrew Cuomo last week, alleging that he had groped her, appeared in a television…

His resignation will go into effect in 14 days

Next question will be what deal was struck behind closed doors yesterday
You must log in or register to reply here.
Top Bottom