Roberta Jackson stepping down less than 100 days into the job.
Reactions: taxslave, Mowich and petros

Twin_Moose said:
Interesting 2 weeks after Kamala was put in charge of the border

Roberta Jackson stepping down less than 100 days into the job.
Click to expand...

Wasn't Kamala's shuffling into the position an invitation to Jackson to step down anyway?

I doubt dem hos could get along for a minute away from a camera. lol
Reactions: Mowich, Danbones and Twin_Moose

Imagine if they wore the same outfit. That could get pretty heated.
Last edited: Apr 9, 2021
Reactions: Mowich, Twin_Moose and 55Mercury

The Washington Post gave Biden "two Pinocchios" for saying the American Jobs Plan, his infrastructure and jobs proposal, will create 19 million jobs. Both Biden and his Transportation Secretary Pete Buttigieg have made the 19 million jobs claim. The source of the statement is a Moody's analysis, which CNN pointed out had estimated the U.S. economy would add about "16.3 million jobs over the same period if the infrastructure proposal does not get passed."

Subtracting Moody's 16.3 million figure from Biden's 19 million projection would equal 2.7 million net jobs created by the infrastructure plan. Rounding up to 3 million jobs and dividing by $2 trillion equals $666,000 per job. If the jobs plan leads to 2.7 million jobs created, the cost to taxpayers would be $740,740.

House Speaker Nancy Pelosi has said that House Democrats hope to draft the formal legislation for the American Jobs Plan by May and finalize it by July 4. The White House fact sheet about the plan includes a description of key parts of the proposal but does not list the specific infrastructure projects the bill would fund.

Democrats are considering using budget reconciliation to move the bill through Congress to avoid the filibuster in the Senate. Democrats used that strategy for the $1.9 trillion American Rescue Plan that Biden signed last month.
Reactions: Mowich and Danbones

Señor Hunter seems to have found some Parmesano to smoke... 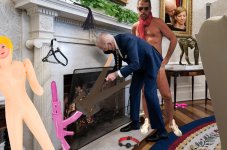 petros said:
Imagine if they wore the same outfit. That could get pretty heated.
Click to expand...

I suggest something with no pockets in a nice bright orange...

if what they are wearing comes with gates and guards, everything should stay cool.
Reactions: petros, Twin_Moose, taxslave and 1 other person

The ship of fools is foundering.
Reactions: Danbones, petros, 55Mercury and 2 others

It Only Took 74 Days Before Hunter Biden Was Trading Off The Presidency, Beginning His Book Tour.​

Wasn't Trump's 1st impeachment over the appearance of what Biden is doing right now?

Joe Biden is withholding military aid from Ukraine that had already been approved by Congress in the face of Russian military maneuvers at its borders.

Biden will reportedly provide only $125 million to Ukraine this year, although Congress has already approved a $275 million package. White House officials said $150 million of that aid will be withheld until Ukraine conducts the reforms that Biden is asking for.

Last year, President Trump was impeached and ultimately acquitted over a debunked allegation of withholding aid from Ukraine. Meanwhile, some believe Russia’s military is planning a new incursion into Ukraine, which has been left defenseless by Biden.

“The U.S. is attempting to push Ukraine into war…such a war needs to be limited in scale because the U.S. tends to always minimize its risks,” stated Aleksey Podberezkin, director of the Center for Military and Political Studies at the Moscow State Institute of International Relations. “They would not engage in it directly, but this is one of their methods to bring collapse to a country and ultimately make leadership of the country give up its sovereignty.”

Meanwhile, Biden is evading calls to accept Ukraine into NATO, although such a promise was made back in 2008. 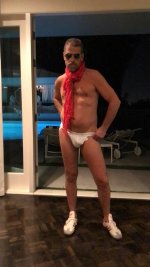 geez there's something ya can't unsee
Reactions: Twin_Moose and B00Mer

'Bipartisan' doesn't mean you need support from both parties, according to Team Biden​

The Merriam-Webster Dictionary defines "bipartisan" like this: "marked by or involving cooperation, agreement and compromise between two major political parties."

But that's not what the White House thinks.

Biden senior adviser Mike Donilon has offered a new definition from the president of "bipartisan" as "an agenda that unifies the country and appeals across the political spectrum."

Can you imagine how she feels now after all she has gone through to help support the narrative to get Biden elected.

IMO she got backhanded, let's see how the nursing home and election investigations go now

White House, Michigan Governor Whitmer in standoff over handling surge of COVID cases in her state​

Michigan Democratic Gov. Gretchen Whitmer is at odds with fellow party member President Biden and his administration over how to handle the surge in COVID-19 cases in her state.

Whitmer has made several requests to the federal government for more vaccines amid a surge in cases and hospitalizations, attributable to a new strain of the virus, the B.1.1.7 variant, first discovered in the United Kingdom.

Whitmer last week spoke directly by phone to Biden for 20 to 30 minutes on the matter but got no support, according to CNN.

"The variants that we've seen in Michigan, those variants are also present in other states. So our ability to vaccinate people quickly in each of those states, rather than taking vaccines and shifting it to playing whack-a-mole, isn't the strategy that public health leaders and scientists have laid out," Andy Slavitt, a senior Biden adviser on the virus, said Monday.

Centers for Disease Control and Prevention Director Rochelle Walensky says Whitmer needs to shut down the state to combat the new strain.

The governor is also reluctant to shut down the state after the backlash she received from residents early in the pandemic.

In addition, the state Supreme Court recently ruled Whitmer does not have the unilateral power to shut down the state.

Interesting argument see how it plays out

BY TYLER DURDEN
WEDNESDAY, APR 14, 2021 - 09:22 AM
A Texas nonprofit landed a federal contract worth up to $530 million to manage the influx of migrant children at the southern border - after recently hiring a Biden transition official.

Biden Refuses To Answer Reporters’ Questions, Asks Them To Leave​

President Joe Biden speaks as he and Vice President Kamala Harris meet with members of the Congressional Black Caucus in the Oval Office of the White House, Tuesday, April 13, 2021, in Washington. (AP Photo/Patrick Semansky)

Joe Biden has drawn criticism yet again. This time for refusing to take questions from reporters who were then asked to leave the Oval Office.

Guatemalan government pushes back on U.S. claim of agreement to surge forces at Guatemalan border​

"There is no document signed" related to border security, the nation's government declared in a Spanish language statement.

My administration will be the hardest on Russia said Biden

Looks like Biden blinked when the chips were down

Putin blocks ALL foreign warships from reaching Ukraine for six months after Biden's Black Sea U-Turn: Russia closes the Kerch Strait after US President pulled US warships and hit Moscow with sanctions​

BLM after the '20 election