Curious Cdn said:
Does your dog have a gun, too?
Click to expand...

Or is that just filed under Cankur I.O.U.s in the phone book?

No one has the right to see another person’s tax returns without just cause.

No one has the right to see another person’s tax returns without just cause.
Click to expand...

What is he hiding? His actions prove that he is hiding something and it is probably illegal as hell. His erratic behaviour screams guilty.
H

No one has the right to see another person’s tax returns without just cause.
Click to expand...

The House will be taking a look at those taxes sooner or later.

I love the way he is able to piss you guys off for imagined faults!

Cliffy said:
What is he hiding? His actions prove that he is hiding something and it is probably illegal as hell. His erratic behaviour screams guilty.
Click to expand...

He is protecting civil rights.

JLM said:
I love the way he is able to piss you guys off for imagined faults!
Click to expand...

Walter said:
Trump, DOJ Request Appeals Court To Block NY Tax Return Subpoena
https://www.oann.com/president-trump-doj-request-appeals-court-to-block-ny-tax-return-subpoena/
No one has the right to see another person’s tax returns without just cause.
Click to expand...

Cliffy said:
What is he hiding? His actions prove that he is hiding something and it is probably illegal as hell. His erratic behaviour screams guilty.
Click to expand...

You don’t trust the IRS . They have the best forensic accountants, and lots of experience with audits .

So whose puppet is he Cliffy ?
C

pgs said:
So whose puppet is he Cliffy ?
Click to expand...

All they have to do is stroke his ego and he will lick their butt hole.
C

Cliffy said:
All they have to do is stroke his ego and he will lick their butt hole.
Click to expand...

It's all about Donald. 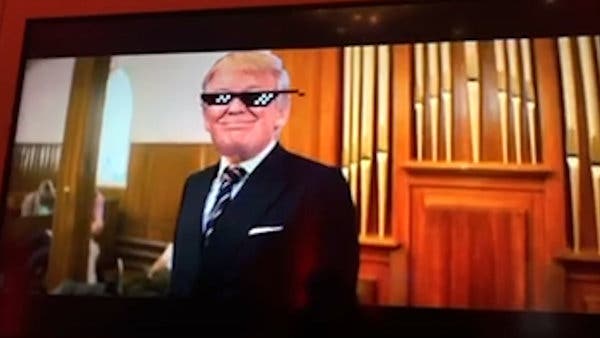 WASHINGTON — A video depicting a macabre scene of a fake President Trump shooting, stabbing and brutally assaulting members of the news media and his political opponents was shown at a conference for his supporters at his Miami resort last week, according to footage obtained by The New York Times.
Several of Mr. Trump’s top surrogates — including his son Donald Trump Jr., his former spokeswoman Sarah Huckabee Sanders and the governor of Florida, Ron DeSantis — were scheduled to speak at the three-day conference, which was held by a pro-Trump group, American Priority, at Trump National Doral Miami. Ms. Sanders and a person close to Mr. Trump’s son said on Sunday that they did not see the video at the conference.
The video, which includes the logo for Mr. Trump’s 2020 re-election campaign, comprises a series of internet memes. The most violent clip shows Mr. Trump’s head superimposed on the body of a man opening fire inside the “Church of Fake News” on parishioners who have the faces of his critics or the logos of media organizations superimposed on their bodies. It appears to be an edited scene of a church massacre from the 2014 dark comedy film “Kingsman: The Secret Service.”
The disclosure that the video was played shows how Mr. Trump’s anti-media language has influenced his supporters and bled into their own propaganda. Mr. Trump has made attacks on the news media a mainstay of his presidency, and he tweeted a similar — but far less violent video — in 2017. In recent weeks as he has confronted impeachment proceedings, he has ramped up his attacks on the news media, repeatedly calling it the “enemy of the people.”

A spotlight on the people reshaping our politics. A conversation with voters across the country. And a guiding hand through the endless news cycle, telling you what you really need to know.

A person who attended the conference last week took a video of the clip on his phone and had an intermediary send it to a reporter for The Times. Parts of the video were posted on YouTube in 2018 by a user with a history of creating pro-Trump mash-ups.

Cliffy said:
All they have to do is stroke his ego and he will lick their butt hole.
Click to expand...

You have been in close to watch?
:O
...are you going back the next time to get film?

Or are you going back just because you want to make sure that what you saw was what you think you saw?

Then your commie nazi globalist bosses all have everything under control...

...so why are you still making up stuff to b*tch about?

Trump Blasts ABC For Trying To Pass Off Kentucky Gun Range Footage As From Syria
https://dailycaller.com/2019/10/16/trump-abc-kentucky-gun-range-syria-footage/

Trump mocks betrayed Kurds facing massacres: ‘They have a lot of sand to play with’

President Trump poured salt in the wounds Wednesday of America’s onetime Kurdish allies, quipping that “they have plenty of sand to play with.”


Showing even less tact or humanity than usual, Trump mocked the onetime American allies who are facing ethnic cleansing after the president gave Turkey a green light to overrun northern Syria over the weekend.


“It’s not our problem,” Trump said during a White House photo op. “They’ve got a lot of sand over there ... There’s a lot of sand they can play with.”


He added that the Kurds are “not angels," even though the Kurdish forces were the primary American ally in the battle against ISIS and al Qaeda militants.
Trump also repeated a Turkish talking point when he asserted that a Kurdish political party in Turkey are terrorists.
They are “more of a terrorist threat, in many ways, than ISIS,” Trump said, without elaborating.
The comments were particularly offensive because they seem to echo common slurs against Muslims or Arabs.


The Kurds live in adjacent parts of several Middle Eastern countries but are not Arabs. Their oil-rich homeland is mostly mountainous and not desert like much of the Arabian peninsula.


https://www.nydailynews.com/news/po...0191016-wefecboxwjb6xh6c4aumnll3wa-story.html
You must log in or register to reply here.
Top Bottom