The so-called (?) “freedom convoy” that blocked Parliament Hill and several Canada-U.S. border crossings may have dispersed earlier this year, but it won’t be leaving our political conversation anytime soon. At least, not if opponents of the federal Conservative Party and their new leader, Pierre Poilievre, have anything to say about it. 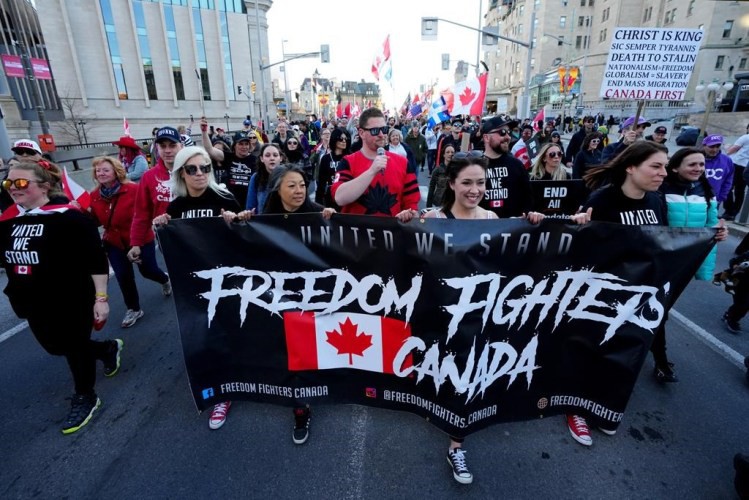 The ‘freedom convoy’ will keep driving our politics — Global News

The party most interested in reminding Canadians about ties between the convoy and Pierre Poilievre will be the Liberal Party. Why? The Liberals are in a very difficult spot. They currently trail the Conservatives in the national popular vote by five points. The Conservatives also lead the Liberals in all regions of the country west of Quebec, with a stunning seven-point lead in seat-rich Ontario. With these numbers, if an election were held tomorrow, the Conservatives would easily win a plurality of seats.

The Public Order Emergency Commission was to begin hearings Sept. 19 but will be delayed now until Oct. 13….so…the greasy weasel and his fanboys will need to deflect until the NDP/Liberals in their Non-Coalition Coalition’s Coalition can shut down that public inquiry 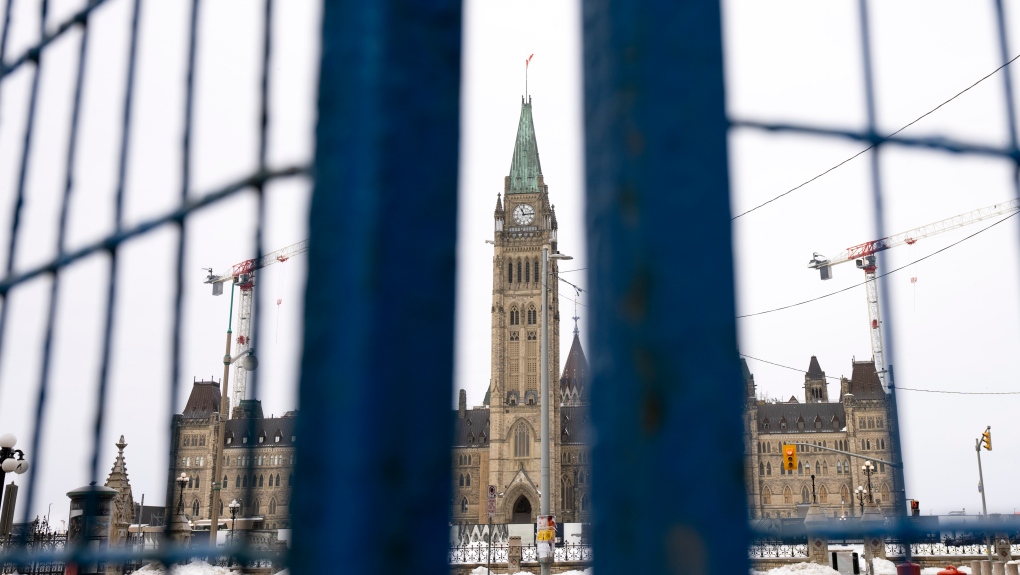 The inquiry into Ottawa's unprecedented use of the Emergencies Act during protests last winter will be delayed until October because of a health issue. The Public Order Emergency Commission was to begin hearings Sept. 19 but will be delayed now until Oct. 13, a statement from the commission said... OTTAWA, THUNDER BAY, ONTARIO ~~~~~~~ October 1, 2022 (LSNews) As Freedom Convoy ‘organizer’ Tamara Lich awaits her trial* to face misdemeanor charges for her alleged role in the Freedom Convoy, another woman is now facing the same type of malicious prosecution or persecution for her...
lakesuperiornews.com 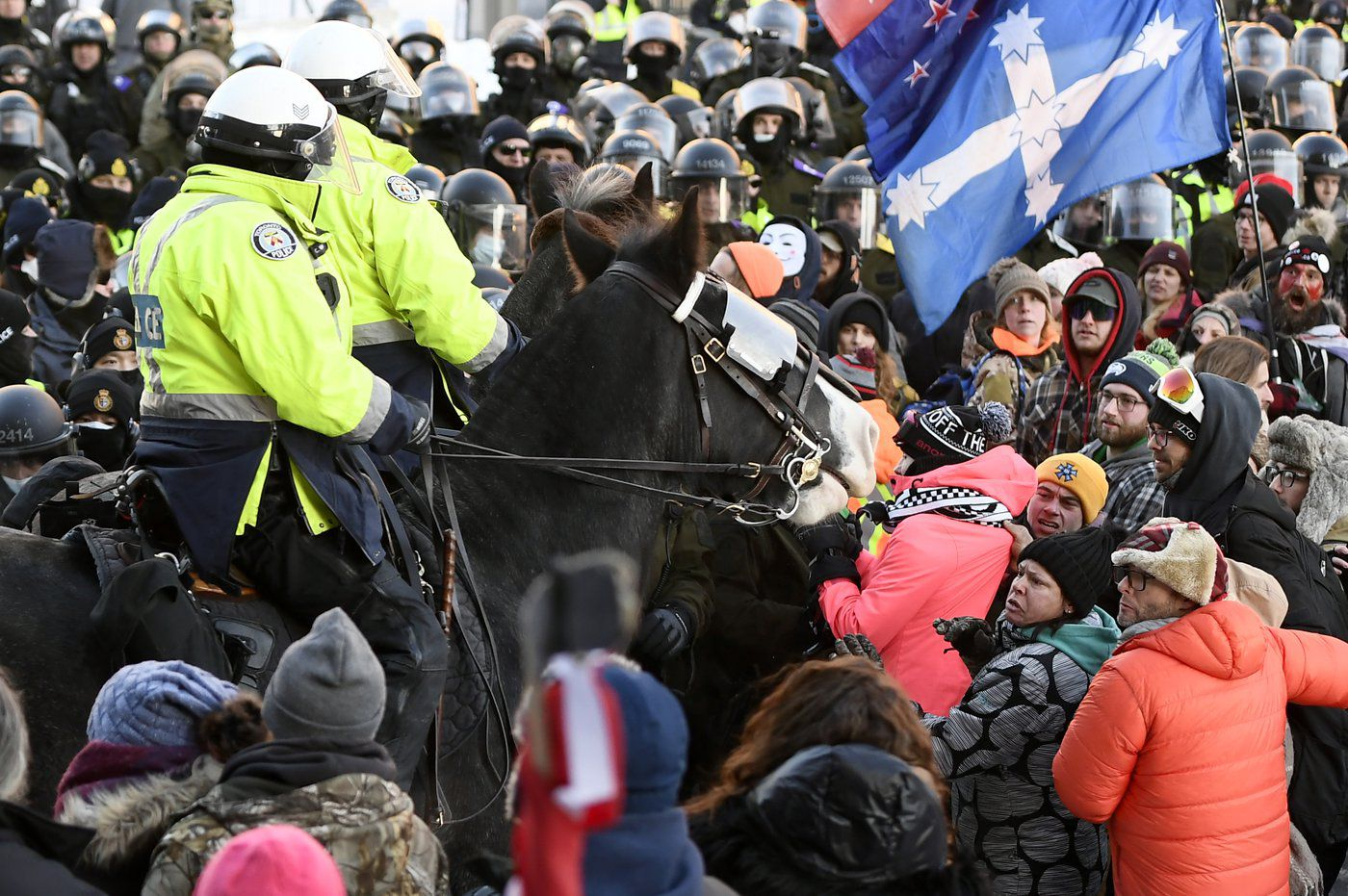 The federal Liberal government has agreed to provide sensitive cabinet documents to the inquiry examining its use of the Emergencies Act during the "Freedom Convoy" protest.

www.nationalobserver.com
Dane Lloyd, the Conservative party critic for emergency preparedness, said Canadians deserve complete transparency from the government to explain why the Emergencies Act was necessary.

"Canadians need more than just the information cabinet had but how they used that information, and how the decision to invoke the Emergencies Act was made," Lloyd said in a statement.

“So far transparency has not been forthcoming. The minister of public safety has lied to and misled Canadians in an attempt to deflect responsibility for invoking the Emergencies Act. We do not have confidence that the Liberals will behave any differently when it comes to the public inquiry."

The Conservatives had been pushing for the Liberals to grant the inquiry access to cabinet documents.

The commission has not yet indicated whether Trudeau or cabinet ministers will be asked to testify at the public hearings that are expected to begin in September (& now Mid-October).

Trudeau's government triggered the Emergencies Act on Feb. 14, and Trudeau revoked the emergency declaration Feb. 23, two days after the NDP joined the Liberals in a House of Commons motion affirming his government's choice to use the exceptional powers, but just hours before the Senate could step in on this decision.

Rouleau granted standing to the convoy leaders, along with a not-for-profit corporation called Freedom 2022 Human Rights and Freedoms, because of their "key role in the events that led to the declaration of the emergency." He also dismissed the federal Conservatives’ application for standing. 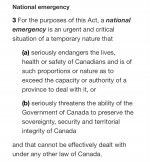 laws-lois.justice.gc.ca
So the above is to be used, by the Liberal/NDP’s, to jointly attack the official opposition (?) because…..they’re ahead in the polls…without the Conservatives having standing in the inquiry (?) before the NDP/Liberals decided when to shut down the inquiry? That sounds reasonable?

The past month (from early June 2022) or so has brought out a number of clarifications about what exactly transpired during this winter’s freedom convoy and what went on behind the scenes before and during the controversial invoking of the Act. And many of them expose how a lot of what the federal Liberal government was leading people to believe was just outright falsehoods. 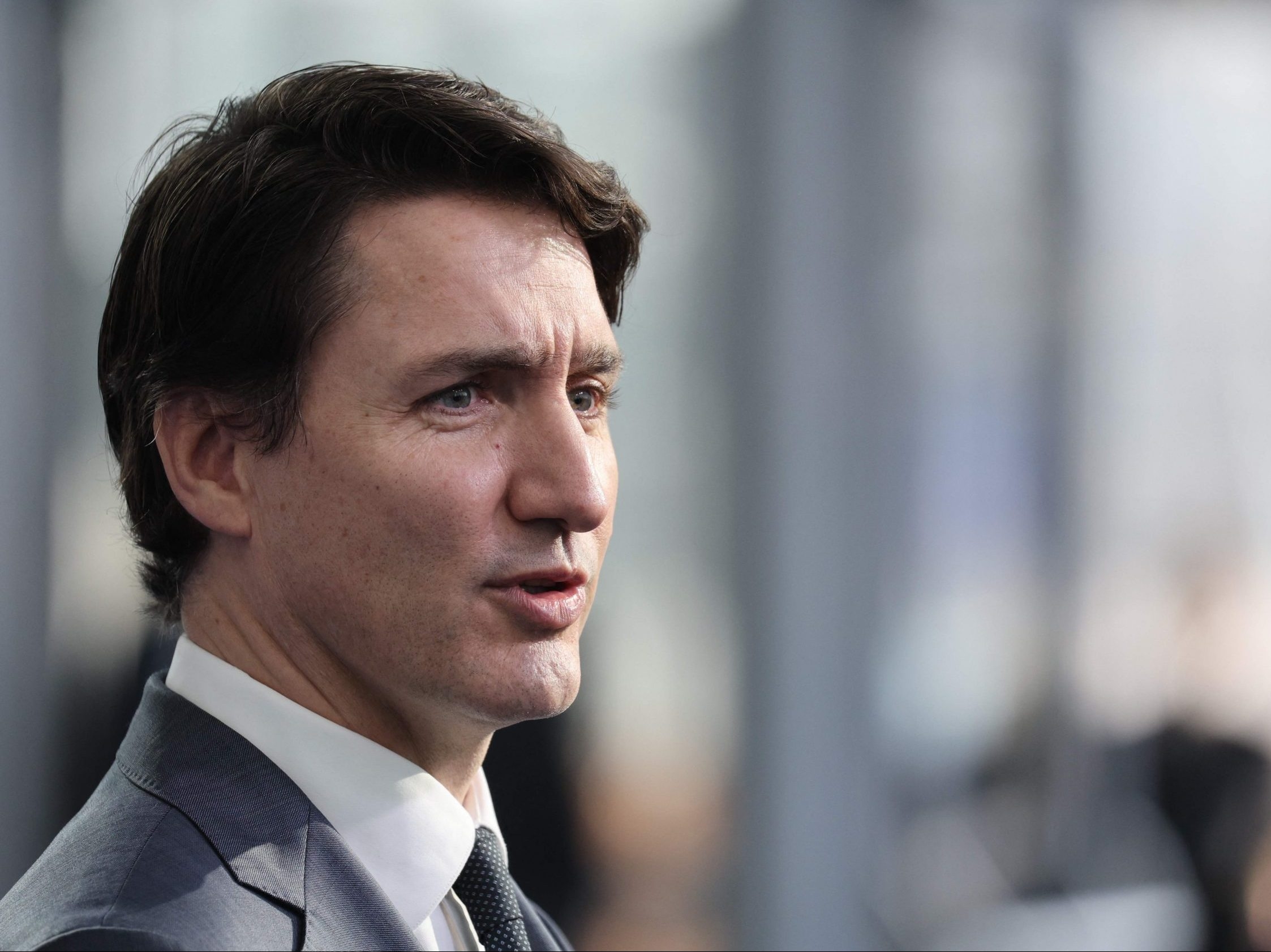 Things are looking rough for Prime Minister Justin Trudeau when it comes to how the Emergencies Act inquiry might unfold.

The Liberals insisted that they only brought in the Act after police requested it (my colleague Lorne Gunter found at least six examples of Public Safety Minister Marco Mendicino making this claim). However, at committee the heads of both the Ottawa police and RCMP said they never made such a request.

Then there’s Justice Minister David Lametti’s claim that malicious foreigners were funding the convoy. But testimony revealed that no level of law enforcement ever told them this. Finance Canada even testified that the convoy was mostly supported by small donations from thousands of average Canadians.

Trudeau has already attempted to politically interfere in the inquiry by trying to frame the terms of reference — saying the purpose of the inquiry is to probe things like funding and supposed disinformation. The Liberals refuse to acknowledge that a large part — arguably the main part — is to probe their very decision to invoke the Act. 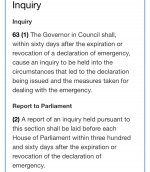 It doesn’t matter though. Because it’s not up to Trudeau to define the scope of the inquiry. It’s up to Justice Rouleau, who is surely aware of how the Parliamentary committee has already weakened the government’s arguments in advance of his work commencing.

That’s quite something, because this first committee is arguably the one rigged in Trudeau’s favour. During some of the meetings, Liberal MPs on the committee have interjected to try to stop tough questions from being asked and have lobbed softball questions to testifying cabinet ministers. These partisan stunts will be much harder (but not impossible) to pull off under Justice Paul Rouleau, the inquiry’s Commissioner.
Reactions: taxme, Twin_Moose and Taxslave2 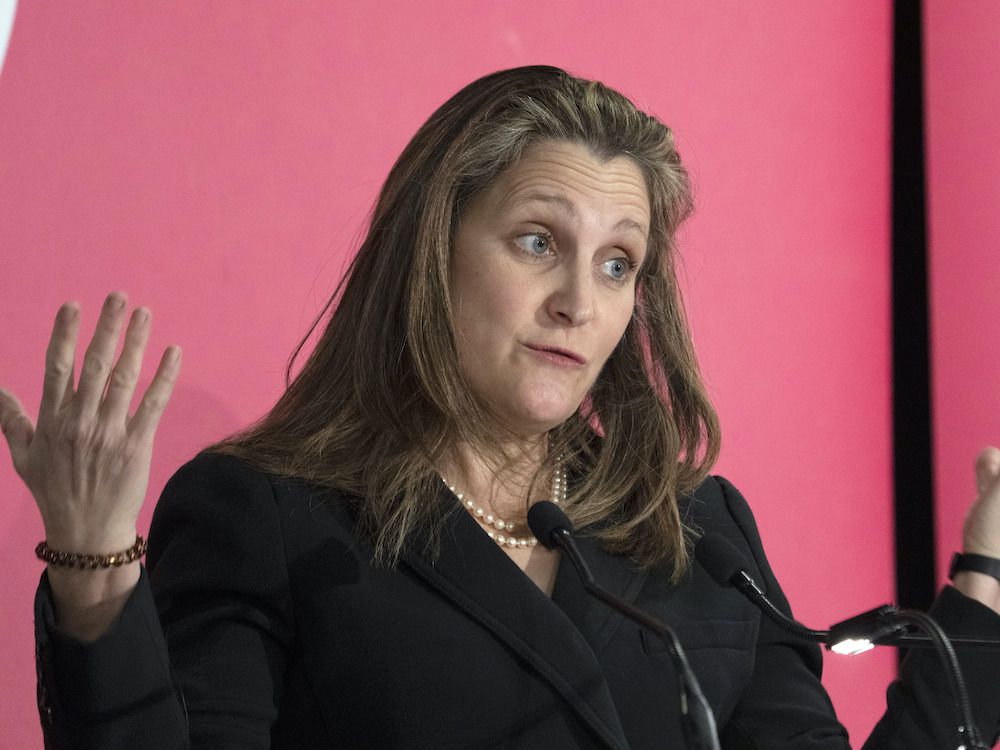 Hope it bites them in the ass, but not likely....Too many stupid sheep in this country.
Reactions: Twin_Moose and petros
T

If Freeland and her globalist liberal ilk could get away with it they would have anyone arrested and charged and sent off to the gulag if they dared to ask a liberal cabinet member a question that do not want to have to answer too. We are already seeing the liberals call anyone who dares to question their authority or questioning their liberal agenda globalist policies as terrorists or extremists and are spreading mis or disinformation about their game plan. We are starting to see true communism in action here in Canada. Don't anyone dare to criticize our government programs and agendas or else. It will be the gulag for you, peasant.

All that is on Freeland's WEF globalist brain dead mind these days is the great WEF globalist reset plan for Canada. Globalist Freeland even sits on the board of the WEF. It would appear as though Freeland has become a terrorist/extremist herself to Canada and Canadians and appears to have only contempt for we the peasants of Canada. The WEF pro globalist liberal party must be defeated in the next election if we are to take back and save our lost freedoms and rights and liberties from these globalist like communists. Works for me.
Last edited: Oct 7, 2022
T

harrylee said:
Hope it bites them in the ass, but not likely....Too many stupid sheep in this country.
Click to expand...

If Pierre gets to be our next PM of Canada, I am pretty sure that Pierre will be giving the liberal party and their ilk followers the boot right up the middle of their globalist liberal arse holes. Make it hurt so much that they would not be able to sit on their arse holes for weeks. Make them pay for all of the globalist vaccine mandate shit that they put Canada and Canadians thru for years now. Works for me.
T

It never hurts to be a bit loopy today in this crazy fkn country. Cuckoo-cuckoo.
T

I believe that 2040 is already here by the way things look in Canuckistan these days. The freezing of bank accounts and credit cards is the first sign that we peasants are in big time trouble here in Chanukistan. I wonder what Chanukistan will look like when 2040 does get here. I am pretty sure that you and me and thee will not be allowed to express our own personal opinions any longer on websites like this one. I am surprised that this website has not yet been shut down by our dear glorious Marxist dicktator leader in Ottawa. Of course, the Marxist dicktator is probably working on that right now. Holy shit, batman. LOL.
You must log in or register to reply here.
Top Bottom