What Are You Having For Dinner?

Serial puker pinched in Markham
By Brad Hunter, Toronto Sun
First posted: Wednesday, October 11, 2017 05:58 PM EDT | Updated: Wednesday, October 11, 2017 06:13 PM EDT
A man with a penchant for serial puking on vehicles behind a Markham restaurant has been busted, York regional Police say.
The bizarre circumstances are enough to make anyone gag.
Cops say that the vomit villain struck more than 30 times during the last four years. Customers and staff at all-you-can-eat Italian eatery, Frankie Tomatto’s on Woodbine Ave. have emerged midday to discover their cars doused with an oily liquid.
Quick-thinking management were determined to bust the bad news barfer and installed surveillance cameras in the lot at the rear of the building.
Cameras captured the man hurling all over the vehicles — always between noon and 2 p.m. Unfortunately, they could not get a clear picture of the man — or his plate.
Newer cameras were able to make out the licence plate and they passed the information and video onto cops.
“We’ve laid charges of mischief against a man from Oshawa in connection,” Const. Laura Nicolle told Global News
“It does look like there is some element of this being intentional, where he’s actually intentionally vomiting on the vehicles.”
The man — believed to be in his mid-40s — works in the area, police said.
They have not released the serial spewer’s name.
Police told http://Metroland.com it appears the suspect would eat and drink at Frankie Tomatto’s, then intentionally vomit.
Serial puker pinched in Markham | Home | Toronto Sun

Grocery chain Metro cutting 280 jobs as part of modernization
The Canadian Press
First posted: Wednesday, October 11, 2017 10:51 AM EDT | Updated: Wednesday, October 11, 2017 10:53 AM EDT
Grocery store chain Metro Inc. says it will eliminate about 280 jobs starting in 2021 as part of a $400-million overhaul of its Ontario distribution network.
The company says the move to modernize and automate its network will mean the loss of about 180 full-time and 100 part-time positions.
The announcement follows comments by Metro in August that it would study automation as it looked to cut costs in the face of the Ontario government’s plan to raise the minimum wage next year.
Metro has six distribution centres in Ontario including four in Toronto and two in Ottawa that employ a total of more than 1,500 workers.
It says its existing distribution network in Toronto no longer meets the needs of its business.
The company plans to modernize the operations in Toronto between 2018 and 2023 with the building of a new fresh distribution facility and a new frozen distribution centre.
“This investment will enable Metro to continue its growth and expansion in the Ontario market,” Metro chief executive Eric La Fleche said in a statement.
“With a new and modernized supply chain infrastructure, we will be even more responsive to the needs of our customers.”
Grocery chain Metro cutting 280 jobs as part of modernization | Ontario | News |

plenty of leftovers for tomorrow ...

^ Just had some leftovers for dinner ~ yummy! It tasted better than last night!

Janes Pub Style Chicken Burgers, Popcorn Chicken recalled due to salmonella fears
THE CANADIAN PRESS
First posted: Wednesday, October 18, 2017 10:18 AM EDT | Updated: Wednesday, October 18, 2017 10:23 AM EDT
OTTAWA — Breaded chicken products sold under the Janes brand name are being recalled due to possible contamination from salmonella.
The Canadian Food Inspection Agency says the uncooked products include Pub Style Chicken Burgers and Breaded Chicken Cutlettes.
The burgers carry a code of 2018 MA 12 on the package and the code on the cutlettes packages is 2018 MA 15.
Both are sold in 800 gram packages across the country and distributed by Sofina Foods Inc. of Brampton, Ont.
The CFIA says the recalled packages should be thrown out or returned to the store where purchased.
Food contaminated with salmonella may not look or smell spoiled but can still make you sick.
Young children, pregnant women, the elderly and people with weakened immune systems may contract serious and sometimes deadly infections.
Janes Pub Style Chicken Bugers have been recalled over possible salmonella contamination. 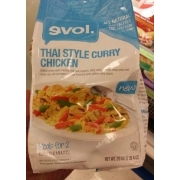 tasty & with good aroma - but hopefully, I will not get salmonella poisoning

^ had some more of that stuff this evening


While it did have some taste, afterwards I get the feeling I've eaten something made of plastic or some other artificial shït. I just cannot get used to eating meals cooked by someone else. For me, nothing beats home cooked meals.

I think you'd fit with our eaters.

the pig base is a perenial winner, pigs are god, pork chops are the hand of the allmighty, halahlooya. When you figure out the worldhas figured you out

It's almost midnight and the compact looms , the moon and the stars and the sun

Dinner this even was a can of kippers and a slice of pumpernickle slathered with butter,

of course I give a fuk, I want the nice bomb, drop and forget, if you cant be nice you can't be real. Nice rules, wave that stick and prosper

Are you employable? I think you'd fit with our eaters.

the pig base is a perenial winner, pigs are god, pork chops are the hand of the allmighty, halahlooya. When you figure out the worldhas figured you out
Click to expand...

but only as long as they are gluten free

Yeah, tis the season to eat the last of last year's moose

oven fries and green beans(fried with garlic and olive oil...the freezer is FULL of those)

...and by the size of these two steaks it looks like breakfast w/eggs and lunch and supper tomorrow too.
Damned!...I will be really glad I did this tommorrow

Cheers on the leftovers!

Bagged 2 mule deer, a whitetail, a young moose 4 ducks, a honker and 21 snow geese for the dogs.

My freezers were empty after a 2 season hiatus.

I don't get out like I used to
But I have family that hunts and don't eat it so they store the remaims at my house.

It's tradition and nothing beats bush meat.

Ex-husband suspected of killing, dismembering, cooking woman
Associated Press
More from Associated Press
Published:
January 22, 2018
Updated:
January 22, 2018 11:07 PM EST
MEXICO CITY — The remains of a young woman who disappeared over a week ago in southern Mexico were discovered Monday by authorities who said she is believed to have been slain, dismembered and cooked on a stove.
Her ex-husband is suspected in what is being investigated as a “femicide,” or the killing of a woman when the motive is directly related to the victim’s gender.
Guerrero state prosecutors said in a statement that the woman left her home in the city of Taxco the morning of Jan. 13. She later said that she would pick up her children at her ex-husband’s home in the afternoon, but was not heard from again, it said.
State security spokesman Roberto Alvarez confirmed later that the woman’s “dismembered” remains had been found Monday inside pots atop a stove.
“It is presumed that she was cooked,” he said.
Alvarez said the divorced husband is the chief suspect.
According to a report last month by the Mexican government and the UN Women agency, murders of women in Mexico rose sharply over the last decade following two decades of declines during which the rate had fallen by half.
Ex-husband suspected of killing, dismembering, cooking woman | Toronto Sun

Cannibal gardener hacks off boss's penis, eats it in soup
Brad Hunter
More from Brad Hunter
Published:
February 22, 2018
Updated:
February 22, 2018 7:53 PM EST
Indonesian gardener, Terusman, is accused of hacking off his bosss penis and eating it in a soup.
A gruesome gardener feasted on his boss’s penis in a sickening soup after killing him in a spat over money.
According to The UK Sun, the 54-year-old accused cannibal — identified only as Terusman — allegedly boiled his boss’s mangled member and festooned it with spices.
The Indonesian man told cops he ate the penis-packed soup to ward off evil spirits.
Investigators say Terusman and his son, 16, plotted to kill the palm oil plantation poohbah for some time. He did not pay them for three years and owed them about $1,600 — a small fortune in that corner of the world.
Cops say the soon-to-be cannibal victim was hacked to death with a machete.
Terusman boldly told local media: “After I cut him, I buried him. I took his ‘vital tool’ back to the hut. I boiled the penis before I eventually ate it myself so that his spirit wouldn’t haunt me.”
He has shown no remorse, even though, if he is convicted he could face the death penalty. Because of his age, execution is likely off the table for his son.
Cannibal gardener hacks off boss’s penis, eats it in soup | Toronto Sun
You must log in or register to reply here.
Top Bottom