all souls on board lost - including 63 Canadians- as boeing 737 (800) crashes after takeoff from Tehran.
Amazingly not a word being said about whether it was blown up or shot down - because the MSM is at the very least self-censoring.
If seems to me knowing as little as i know that the plane suffered a catastrophic failure rendering it immediately out of control. Not at all the same thing that has been plaguing the 737 max


Hoid said:
knowing as little as i know
Click to expand...

video purporting to be footage of aircraft in flames crashing
H

I struggle to imagine any scenario that would cause that other than a bomb or missile.

We seem to have a new conspiracy theorist on board!
He must be channeling Alex Jones.


Hoid said:
I struggle to imagine any scenario that would cause that other than a bomb or missile.
Click to expand...

If the political climate were not as it is right now in that area, this would likely just be treated as a vanilla plane crash. Undoubtedly the actions as of late will lend to the imagination, I get that but for me I would want to see proof.


Girth said:
Was Flight 752 that killed 62 Canadians a tragic accident, or was the plane shot down by an Iranian missile?
Click to expand...

Or possibly an American missile. We've done it before, y'know. In 1988. The Vincennes shot down Iran Air 655.


Girth said:
Not very patriotic there, TB
Click to expand...

As Canadians would say, "Sore-ree."


Girth said:
T-Bones, I think you are an intelligent man. However, one wonders what a self-proclaimed lawyer is doing spending all his free time on a political message forum outside his native country.
Are you really a decorated military veteran, lawyer, and Native American from Washington?
I am just asking, since someone (who shall remain anonymous), sent me message. via inbox. They had claimed that they knew of your real identity. This person claims that your real name is Ron Marek of Thornhill, Ontario. They went on to say that you are Caucasian, of Eastern European ancestry. The message claims that you are a Mall Security Guard for Garda, and you ahve been assigned to the Promenade Mall.
These are some serious allegations. I really do not know what to believe. However, it may explain your contempt for the working class man.
Click to expand...

No, I'm a Shawnee, military veteran (technically decorated, but don't make too much of it. You literally can't be in the U.S. Forces and not be decorated), and lawyer from Oklahoma, currently residing in the Maryland suburbs of Washington. I just say "Washington" because folk hereabouts tend to think of the Maryland and Northern Virginia suburbs as "Washington," despite the fact that they are geographically not in the District of Columbia. Same way some folk might say "I'm in New York," when they actually mean the New Jersey or Connecticut suburbs of New York City.

The only "Garda" I know of is the Garda Siochana, the national police force of the Republic of Ireland.

This discussion is fairly pointless. I either am who I say I am, or I'm not. You really have no way of proving it either way, and I don't intend to provide ID. Way I see it, you can claim to be a one-legged lesbian Lithuanian pipefitter from Cameltoe, Manitoba, and I'll believe you.

So, up to you. Don't really make much difference to me either way.


Hoid said:
https://www.reuters.com/article/us-...rainian-airliner-to-boeing-mehr-idUSKBN1Z71C7
iran will not release the black boxes from the plane they apparently shot down
Click to expand...

You have to agree, it's highly suspicious and I believe Iran was responsible for the crash, either by missile or sabotage
M


Tecumsehsbones said:
No, I'm a Shawnee,
Click to expand...

So you're a native American then? Why are you defending the white murders who stole your land!?

Does not make sense to me!

Not hard to get a bomb into the luggage compartment of a plane if you work at the airport.


Mockingbird said:
If the political climate were not as it is right now in that area, this would likely just be treated as a vanilla plane crash. Undoubtedly the actions as of late will lend to the imagination, I get that but for me I would want to see proof.
Click to expand...

The discovery of what appear to be schrapnel holes found in the fuselage and wing of the wreckage is certiainly highly suspicious. 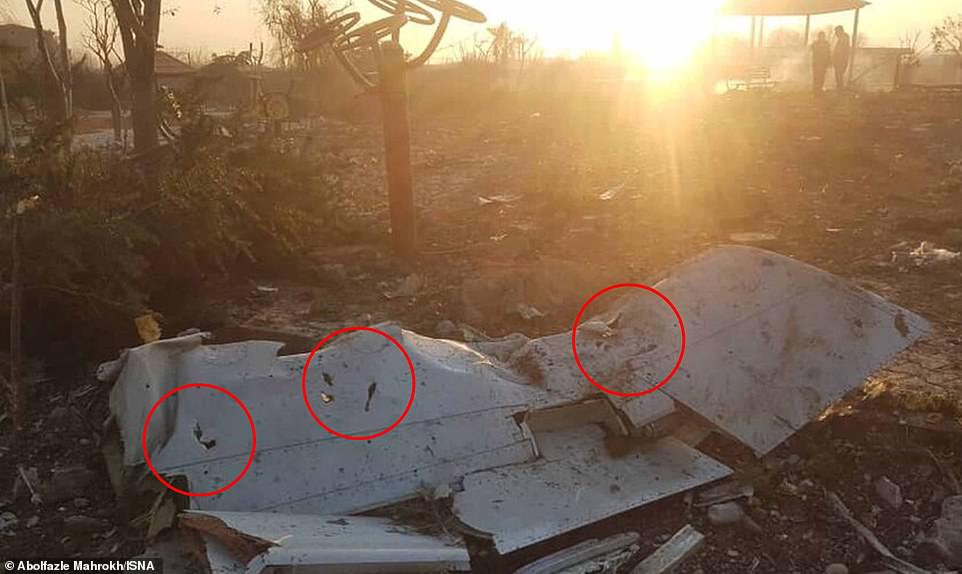 I also wonder if the images that have surfaced this morning that appear to be missile debris near the wreckage is a hoax. Maybe.

A brand new 737 doesn't normally just burst into a fireball after takeoff, even one with "mechanical issues". Seems a bit suspicious to me, if it was a mechanical failure, the timing and location of such an exceedingly rare event is a pretty unfortunate and incredible coincidence. Doesn't take a tin foil hat to consider to the conclusion supported by the principle of Occam's razor.

Iran says Ukrainian plane was on fire, tried to turn back

The report also confirmed that both of the so-called “black boxes” that contain data and cockpit communications from the plane had been recovered, though they sustained damage and some parts of their memory was lost. It also said that investigators have initially ruled out laser or electromagnetic interference as causing the crash.
Oleksiy Danilov, secretary of Ukraine's Security Council, told Ukrainian media that officials had several working theories regarding the crash, including a missile strike.
"A strike by a missile, possibly a Tor missile system, is among the main (theories), as information has surfaced on the internet about elements of a missile being found near the site of the crash," Danilov said. He did not elaborate on where he saw the information on the internet.
Ukrainian investigators that arrived in Iran earlier on Thursday currently await permission from Iranian authorities to examine the crash site and look for missile fragments, Danilov said.
The Tor is a Russian-made missile system. Russia delivered 29 Tor-M1s to Iran in 2007 as part of a $700-million contract signed in December 2005. Iran has displayed the missiles in military parades as well.
Iran did not immediately respond to the Ukrainian comments. However, Gen. Abolfazl Shekarchi, the spokesman of the Iranian armed forces, denied a missile hit the airplane in a comments reported Wednesday by the semiofficial Fars news agency. He dismissed the allegation as "psychological warfare" by foreign-based Iranian opposition groups...……...More
Click to expand...

Iran plane crash: Here’s what we know about the victims who lived in Canada


Mockingbird said:
If the political climate were not as it is right now in that area, this would likely just be treated as a vanilla plane crash. Undoubtedly the actions as of late will lend to the imagination, I get that but for me I would want to see proof.
Click to expand...

the fact that it occurred at or about the same time that iran was launching an air assault into Iran and would probably have had their own anti air defenses up and running makes it very easy to imagine how it could happen.
H


taxslave said:
Not hard to get a bomb into the luggage compartment of a plane if you work at the airport.
Click to expand...

i would imagine it would be all but impossible there

I'm sure the Iranians shot it down.


Walter said:
I'm sure the Iranians shot it down.
Click to expand...

The US is now reporting that it was shot down by Iran.


Girth said:
Was Flight 752 that killed 73 Canadians a tragic accident, or was the plane shot down by an Iranian missile?
Click to expand...

just heard on the news that it appears to have been shot down by missile(s). 8O
You must log in or register to reply here.
Top Bottom