I dunno, there's also Legault, who accused the Montreal English School Board of being "extremists" because they are threatening to sue the province over the govt's move towards nazism.
Yep, being an anti-nazi in Quebec gets you labeled as an "extremist". Meanwhile, retards like Flossy and Groper will still continue to cry about "right-wing extremists" in Canada while denying the fact they both support Quebec nazism.
Funny, where's Procom, ooops I mean Antifa in all of this? I thought they were anti-fascist yet they seem pretty silent in Canada about the goings on in Quebec.

This WOULD be a great opportunity for those who jacked themselves off over "Punch a nazi Day" to go to Quebec and put their money where their stupid, useless pie holes are.
Lookin' at you, Flosstard.
Reactions: 55Mercury, Twin_Moose, petros and 1 other person

They both come from Kwebek. Same shit, different pile.
Reactions: Twin_Moose and petros

Jinentonix said:
Yeah, we already got Trudeau and his Quebecois nazi buddies that you happily support. Yep, Quebec has decided that THEY get to decide who gets to immigrate to Quebec and who doesn't. But yeah, Bernier is the "nazi".

Democracy is not Nazism.

How many times do you need that explained to you?

Combining information in her book with interviews Wilson-Raybould has given with the release of ‘Indian’ in the Cabinet: Speaking Truth to Power this week, it sounds like something out of the old Soviet Union. http://apple.news/A8yk6gnCaQKuTmukqe4R4JA

Absent the actual, physical elimination of Liberals judged insufficiently loyal to Trudeau and their unelected political masters in the PMO, that is.

Wilson-Raybould describes a PMO where cabinet ministers aren’t even trusted to talk to each other, without political minders appointed by the leader’s office present, a common feature of communist regimes. http://apple.news/A8yk6gnCaQKuTmukqe4R4JA

A PMO where senior cabinet ministers are denied direct access to Trudeau, bossed around by unelected political appointees, unable even to hire their own senior staff, without direction from the PMO.

Wilson-Raybould says cabinet ministers were advised not to put anything in writing — reminiscent of the Ontario gas plants scandal that enveloped the Liberal government of then premier Dalton McGuinty.

She says they were also advised to conduct sensitive discussions by phone, presumably so there would be no written record of what transpired.

Liberal MPs considered the greatest possible political sin to be perceived as having been disloyal to Trudeau, even when defending an important point of principle, such as prosecutorial independence, as occurred in her case. http://apple.news/A8yk6gnCaQKuTmukqe4R4JA

(Wilson-Raybould and Jane Philpott — the only Liberal cabinet minister who resigned her position to protest Wilson-Raybould’s treatment by the PMO during the SNC-Lavalin scandal — were tossed out of the party by Trudeau.) http://apple.news/A8yk6gnCaQKuTmukqe4R4JA

Trudeau is described by Wilson-Raybould as superficially charming and convivial in casual conversation, but petulant, resentful and angry when he doesn’t get his way.

To be clear, the increasing centralization of power in the Prime Minister’s Office is nothing new on Parliament Hull.

That doesn’t change the fact that the increasing disdain the PMO has for elected MPs — including those elevated to cabinet posts — is a growing threat to both democracy and responsible government.
Reactions: Twin_Moose

You’re not a better fucking shot

mentalfloss said:
Democracy is not Nazism.

How many times do you need that explained to you?
Click to expand...

Oh dear, I see I triggered your denialism. So just to be sure, you'd be okay with Ford making Ontario strictly unilingual and providing provincial services in English only (govt services, education, health care etc.) while declaring that only English speaking immigrants can settle in Ontario? You would defend that as "democracy" would you?
Reactions: Twin_Moose

You keep conflating your pet issues with policies chosen by the people.

As long as dogshit like the PPC don't gain any ground.

Why is Bernier always campaigning chuds in Alberta?

So a bunch of nazis voting for the nazification of Quebec is fine with you, as long as it's done "democratically". Jesus fucking Christ dude, you'll excuse ANYTHING that isn't being done by Conservatives. You don't want Bernier to gain ground because you think he's a racist and yet you try and exclaim that Quebec nazism is actually democracy.
So to sum up, as long as people actually vote for nazism, you consider nazism to be a legit form of govt in Canada. Your ALT-left masters are going to be very disappointed in you.
Reactions: Twin_Moose

I know reading comprehension isn't your strong suit but this thread is about anti-vaxxers, not the Bloc.

Why is Bernier courting these hogs?

mentalfloss said:
I know reading comprehension isn't your strong suit but this thread is about anti-vaxxers, not the Bloc.
Click to expand...

No, it's ultimately about Trudeau's campaign and him trying to blame anti-vaxxers for his lack of popularity across the country. Nice try though, Mr. "It's Not Nazism If It's Done Democratically".

Jinentonix said:
No, it's ultimately about Trudeau's campaign and him trying to blame anti-vaxxers for his lack of popularity across the country. Nice try though, Mr. "It's Not Nazism If It's Done Democratically".
Click to expand...

Trudeau is the most popular party leader.

Life of the party?

He snorts the best coke and smokes the best grass and his bed is overflowing with lots of tits and ass?

mentalfloss said:
Trudeau is the most popular party leader.
Click to expand... 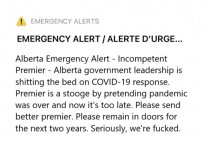 You should be more worried about the long term effects on your body from getting an untested poison injected than a couple of people getting a cold.
You must log in or register to reply here.
Top Bottom