Canadians Are Officially Sick And Tired Of Justin Trudeau

In Homer's poem , The Illiad, we wrote, "For once deceiv'd, was his; but twice were mine." These days, it is usually quoted as, "Fool me once, shame on you; fool me twice, shame on me."

Will Canadian voters be fooled a second time?
---

Canadians Are Officially Sick And Tired Of Justin Trudeau
Poll shows a new low for the PM!
- Riley James

Oh, Justin - it appears that times up on your shenanigans!

Canadian PM Justin Trudeau has hit an all new low with the Canadian population.

The recent venture over to India has caused more problems for the PM than it has achieved anything big.

Lots of people are talking about Canada's new peacekeeping mission to Mali, but many people are giving the point of this a second thought, and it all comes back to the laughable journey to India.

A new poll has been released this week, and the results are not great.

Justin Trudeau's disapproval rating across Canada has jumped above the 50% mark for the first time, ever, since the 2015 election.

The latest survey, done by The Angus Reid Institute was released yesterday and found that Trudeau's recent trip to India has been a factor in the loss of approving citizens. The increasing worry over government spending isn't helping him, either.

The approval rating gap between the Liberal and Conservative Parties is now so wide that the Conservatives feel that the Tories has a shot at winning a majority government at our next federal election.

If there was an election tomorrow, and thank goodness there isn't, 40% of those who were decided or leaning voters would back the Tories.

If by some strange chance Trudeau does win the next election it'll likely be with a bare minority govt.
H

you know I was just thinking what we really need is one more Justin Trudeau thread.

the problem is not enough threads about Trudeau

Does that anger you, sweetie? And you put me on ignore too! I knew that you have to read my threads. You cannot help yourself. :lol:

It's a beautiful day. Go out and play with your friends.
J

Hoid said:
you know I was just thinking what we really need is one more Justin Trudeau thread.
Click to expand...

You should know by now no one gives a flying f%^$ what you think. :lol:

People can learn. Idiots will not. 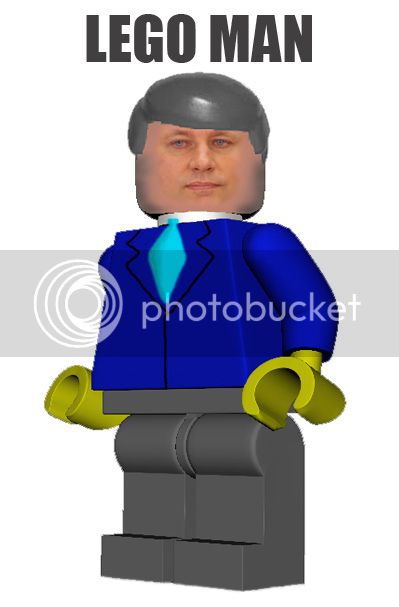 Don't worry, you have Lego Man light now. He will save you from those nasty Liberals.

Hoid said:
you know I was just thinking what we really need is one more Justin Trudeau thread.
Click to expand...

Nah, what we really need is another Trump thread. You know, this being a Canadian site and all.

Cliffy said:
Conservative be like... We miss our fearless leader:

Don't worry, you have Lego Man light now. He will save you from those nasty Liberals.
Click to expand...

The end of the month is always better for you Cliffy. When your cheque comes in, you can buy a couple of weeks worth of drugs. It mellows you right out. You can be a real potty mouth the last week before you get your money. :lol:

Some of the older folks i work with tell me that at the time they were tired of Harper and wanted a change.

The majority of those people now regret their decision from what i'm hearing.

Johnnny said:
Some of the older folks i work with tell me that at the time they were tired of Harper and wanted a change.

The majority of those people now regret their decision from what i'm hearing.
Click to expand...

They could have just voted for the most trustworthy and competent local candidate. I've voted, Federally and Provincially, for NDP, Green, Progressive-Conservative, and Libertarian candidates. None that I've ever voted for ever won though.

That I've never voted for a Liberal or Conservative candidate has nothing to do with the inferiority of their respective parties. It just has to do with the fact that in my particular riding, there was always a better candidate up to this point. Once you start to vote for the best candidate, you'd end up with stronger MPs that the party couldn't whip into a vote so easily, candidates who wouldn't be afraid to leave the party and sit as an independent the moment the party leader tries to whip his vote, etc.

In the end, we have none to blame but ourselves. Also, I never ever vote strategically. I've sometimes voted for the best candidate even when I knew he stood no chance of winning. Why? because I don't want to encourage parties to aim to be the second worst party so they can rack up the strategic votes against the worst. If we vote strategically, we'll always end up with the second-worst party. Is that really what we want as a society? I don't vote for my candidate to win. I vote for a candidate because he deserves my vote. I've also cast a blank ballot on occasion too.

Murphy said:
I
Canadian PM Justin Trudeau has hit an all new low with the Canadian population.

The recent venture over to India has caused more problems for the PM than it has achieved anything big.
Click to expand...

Interesting that an ardent feminist would be losing the female vote. That is quite an accomplishment in and of itself.

... Anywho, Justine has lots of time left to make an even bigger fool of himself and the liberal party.

Most of us were sick and tired of him long before he won the leadership.

What an embarrassment to the country

I don't blame Trudeau entirely though. The other MPs in his party do have the option of sitting as independents. That's a decision an MP is always free to make. Also, the Prime Minister gets only one vote in Parliament. No law binds an MP to vote for his party. The electorate is at fault for electing such spineless MPs.

Cannuck said:
Had the Conservatives stuck to being fiscally conservative and told the social conservatives to STFU, we wouldn't be stuck with Trudeau now.
Click to expand...

Scott Reid is a good MP:

Though he is a member of the Conservative Party, he is known for voting against his party often enough, especially when it involves infringing on people's civic liberties. He showed this a few times under Harper and that's why he'll always be a backbencher: he's not as loyal to the party line as most MPs are. Parliament needs more PMs like him.

...or tell the social conservatives that they need to accept left leaning governments if they are going to alienate 80% of the population with their fiscal irresponsibility and socially conservative agenda. If Canadians have a choice between two fiscally irresponsible parties they will choose the socially liberal one most of the time.
You must log in or register to reply here.
Top Bottom