Jinentonix said:
Interesting timing. Happens conveniently just before the long weekend and the hearing has been moved forward six weeks. Election campaigns run for 36 days. Lot's of time to dissolve Parliament and drop a writ and get another snap election in. That would also catch the Conservatives scrambling since they don't vote for their party leader until Sept 10.
Don't mock me, we're talking about an idiot who clearly stated that nobody wanted an election in the middle of a pandemic and then short-called an election in the middle of a pandemic.
Click to expand...

And what the hell happened to your nose?

And what the hell happened to your nose?
Click to expand...

That's the mockery. Ya gotta admit, telling people not to mock you is just asking for it.

Tecumsehsbones said:
That's the mockery. Ya gotta admit, telling people not to mock you is just asking for it.
Click to expand...

Wow, that was some seriously low-key mockery.

Jinentonix said:
Wow, that was some seriously low-key mockery.
Click to expand...

The Emergencies Act states that a public order emergency of this nature must arise from the threat of violent extremism, not that it might merely create an opportunity for other bad actors. Approving the use of emergency powers to limit Canadians’ charter rights of freedom of speech and assembly because of their possible unintended consequences would have dystopian implications.

These serious constitutional infirmities may not be obvious if the government’s assertions are packaged withing alarming hypothetical scenarios and presented behind closed doors, untested through the cross-examination of expert witnesses. To make matters worse, the agencies tasked with formulating and delivering these confidential assessments have a history of being unfaithful to the law, and to the truth.

Less than two years ago, revelations of the security establishment’s disturbing approach to investigating and reporting on extremism led to harsh condemnation by the Federal Court, which criticized it for demonstrating “a degree of institutional disregard for — or, at the very least, a cavalier institutional approach to — the duty of candour and regrettably the rule of law.”

An official conclusion that the government had a reasonable basis to conclude that the Freedom Convoy represented a threat to the security of Canada predicated on secret intelligence detailing vague links between those engaged in peaceful protests and extremists would only deepen the public cynicism that Justice O’Connor warned about, especially since we have had so many other warnings from eminent jurists of the government’s propensity to exaggerate such claims. 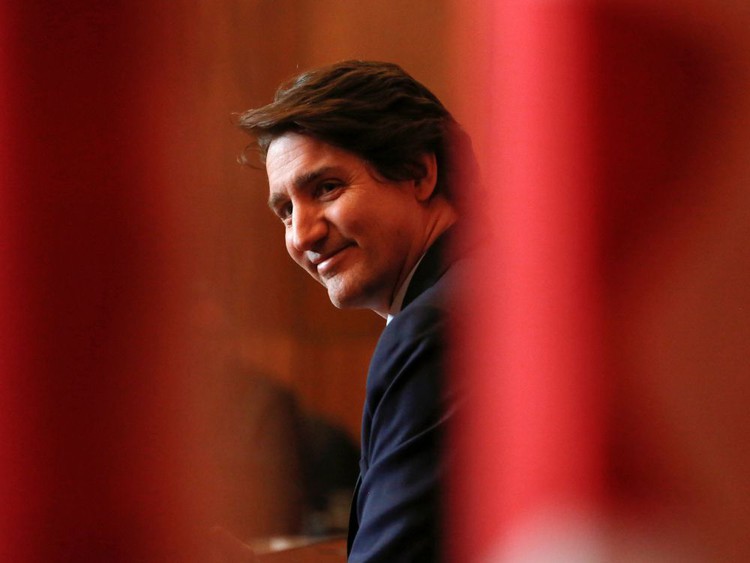 When it comes to the judgment of whether the Trudeau government abused its emergency powers, justice must not only be done, it must also be seen to be done

When it comes to the judgment of whether the Trudeau government abused its emergency powers, justice must not only be done, it must also be seen to be done. Findings in favour of the government on the basis of secret evidence that might never be seen will never be trusted. The preservation of the rule of law requires, to use the Public Order Emergency Commission’s words, a “transparent and thorough review of the circumstances that led to the declaration of a public order emergency.”

Half a year has gone by since the Trudeau government took the unprecedented step of invoking the Emergencies Act to deal with protesters in Ottawa and at several border crossings. Yet the question of whether this was an appropriate and measured use of emergency powers or an unconstitutional power grab seems no closer to being answered — and likely won’t be, so long as Ottawa continues to hide behind a veil of secrecy. 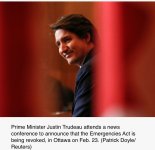 Justice will not be done nor will it be seen being done .
Reactions: Dixie Cup

pgs said:
Justice will not be done nor will it be seen being done .
Click to expand...

Well we'll have to do the best we can in that regard ourselves and kick him out of office with a resounding defeat.
Reactions: Dixie Cup

So it’s Sept 21st now….so where are we at on the Public Inquiry into the Emergencies Act again???

Currently Trudeau’s in NY at the UN, & Singh is attacking the Conservatives because they’re also the opposition to the currently governing party? Makes sense?

During his almost eight years as Prime Minister, Trudeau has become an avatar for everything that people globally find insufferable about the virtue-signaling, self-righteous left, and Jagmeet Singh is attacking the Conservatives?

He’s an unrealistic, slick parody of what we think of when we envision what woke politics have done to western culture and how progressive men present themselves to the world.

They stand above the crowd, looking down and judging. They have some special insight into how the ‘civilized’ behave. The rest of us must be instructed, by force if necessary.

Two things come immediately to mind when I think of the careful caricature that is Justin Trudeau.

First, numerous, now-infamous photos that emerged during his re-election campaign showing him in full blackface at parties as a student and later as a teacher.

He also is only 50 years old, so the excuses of ‘that was the time’ don’t ring true in the same way it does for other people, who participated in something that we now recognize as unacceptable.

Trudeau said it was simply a mistake. But would he extend that same forgiveness to others? I doubt it.

Second, I think of his puritanical, dystopian COVID vaccine mandates and the brutal crackdown that he unleashed after his heavy-handed governance triggered mass strikes and protests.

As “freedom convoy” protesters descended on Ottawa and cities across Canada last winter, Trudeau insanely declared the protests “illegal” and championed the suppression of legitimate dissent through law enforcement and corporate censorship while the Liberal NDP non-coalition coalition came out’a the closet.

Trudeau is all about freedom, until direct democracy gets in the way of his agenda.

And recall, how Trudeau weighed in on American society when the country was dealing with violent riots triggered by the murder of George Floyd.

“We all watch in horror and consternation what’s going on in the United States,” he said, when asked about President Donald Trump’s call for the military to address the violence.

But Canadians truckers are honking their horns in Ottawa? Drag them to prison!
And before anyone cries hypocrisy — No, I did not have a problem with the Prime Minister of Finland when videos surfaced showing her drunk and dancing with friends. She was doing this privately, on her off-time, and was recorded in a private setting. 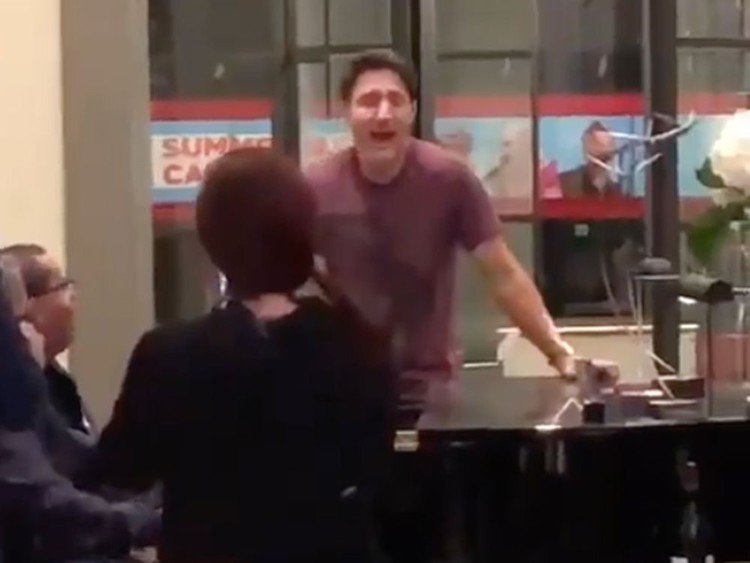 He blows apart the insufferable moral superiority of the Left: It really is just fantasy

But the public is getting wise to it. Trudeau narrowly won a third term as prime minister in the last elections.

Yes, even polite, progressive Canadians don’t seem nearly as enthralled with his Hollywood politics, behavior and looks as they used to be. He currently holds a 40 per cent approval rating in Canada.

He has long been the sanctimonious cartoon-version of the type of politician that people in San Francisco worship and people in the rest of the country are repulsed by.

He is the type of leader who passes judgment on those who accidentally use the ‘wrong’ pronoun, vote conservative or don’t abide by the same brand of politics that he preaches.
As far controversies go, there are worse things happening around the world. But Trudeau presents himself as the pinnacle of progressive perfection. That’s why this sing-song scandal is so entertaining.

You’d think he would know a little more about social decorum and just plain manners. Could he really not wait a few days to do something like this back home in Canada?
Reactions: petros and Taxslave2

Ron in Regina said:
So it’s Sept 21st now….so where are we at on the Public Inquiry into the Emergencies Act again???
Click to expand... 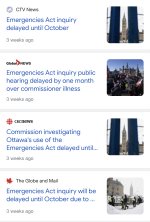 turdOWE's hand picked "investigation" leader is in hospital. Couldn't take the chance of getting someone honest to investigate a criminal government action.

Taxslave2 said:
turdOWE's hand picked "investigation" leader is in hospital. Couldn't take the chance of getting someone honest to investigate a criminal government action.
Click to expand...

This guy goes back to Pierre so dont expect any truth out of this.
Reactions: Taxslave2
T

I don't. This is why he was picked. SHort of chairing the "investigation" himself, turdOWE couldn't have found anyone safer.
Reactions: petros
You must log in or register to reply here.
Top Bottom