Twin_Moose said:
Raw sewage out of Vancouver sewer system into the Pacific Ocean?
Click to expand...

Vancouver gets its water from surface.

petros said:
Vancouver gets its water from surface.
Click to expand...

Apparently aquifers are a product of our unique contemporary society... Kinda like iPhones
Reactions: Mowich, Twin_Moose and petros

MELBOURNE — The health of Australia’s Great Barrier Reef, the world’s most extensive and spectacular coral reef ecosystem, is in a critical state and…

Killing rats could save coral reefs​ 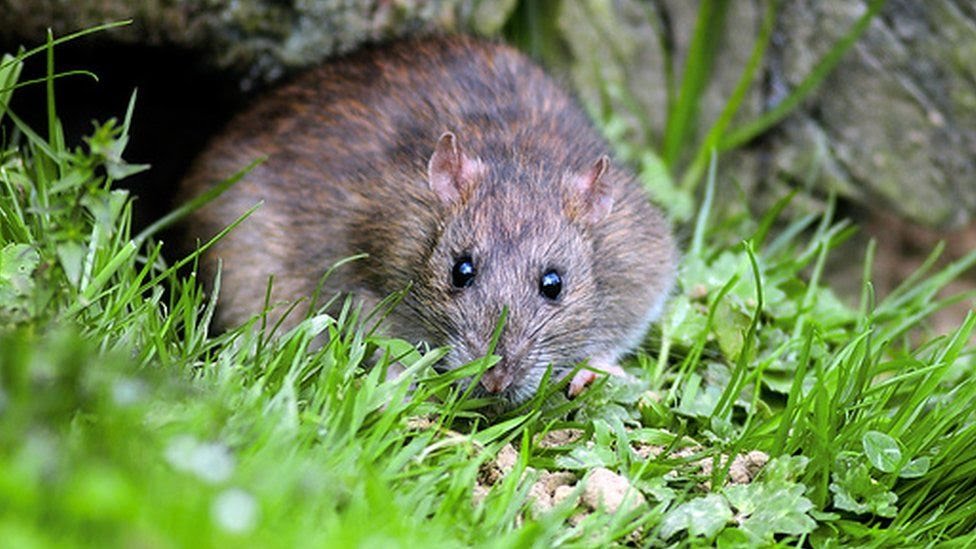 Image captionBrown rat - an invasive predator that eats seabird eggs and chicks
The much maligned rat is not a creature many would associate with coral reefs.
But scientists studying reefs on tropical islands say the animals directly threaten the survival of these ecosystems.
A team working on the Chagos Islands in the Indian Ocean found that invasive rats on the islands are a "big problem" for coral reefs.
Rats decimate seabird populations, in turn decimating the volume of bird droppings - a natural reef fertiliser.
The findings are published in Nature.
Scientists now advocate eradicating rats from all of the islands to protect these delicate marine habitats.
Image copyrightNICK GRAHAM 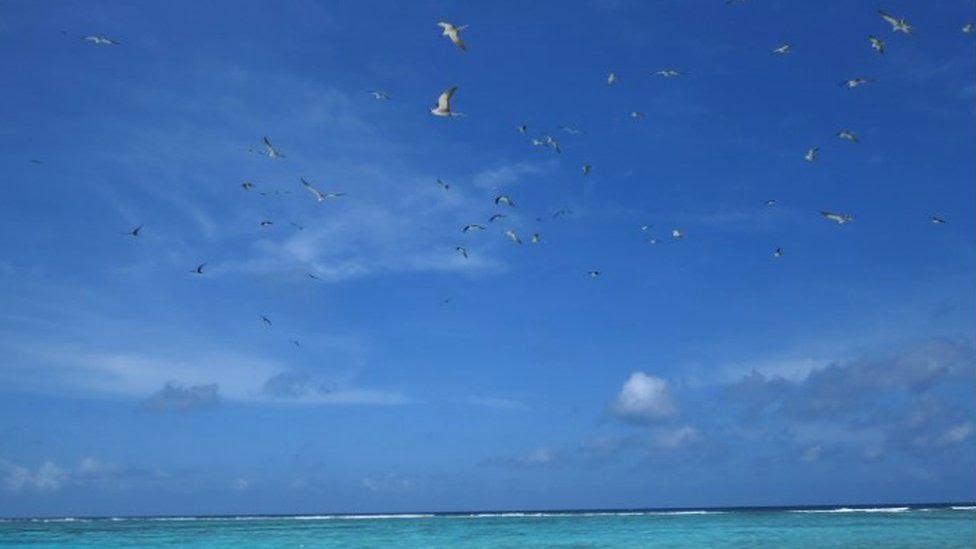 How do rats harm coral reefs?​

The Chagos Archipelago provided a large-scale natural laboratory to answer this question; although the islands are uninhabited by humans, some of them are now home to invasive rats, brought by ships and shipwrecks. Other islands have remained rat-free.
"The islands with and without rats are like chalk and cheese," said lead researcher Prof Nick Graham from Lancaster University .
"The islands with no rats are full of birds, they're noisy, the sky is full and they smell - because the guano the birds are depositing back on the island is very pungent.
"If you step onto an island with rats, there are next to no seabirds."
By killing seabirds, this study revealed, rats disrupt a healthy ecosystem that depends on the seabird droppings, which fertilise the reefs surrounding the island.
On rat-free islands, seabirds including boobies, frigatebirds, noddies, shearwaters and terns travel hundreds of kilometres to feed out in the ocean. When they return to the island, they deposit rich nutrients from the fish they feed on.
"These nutrients are leaching out onto the reef," explained Prof Graham.
Image copyrightNICK GRAHAM 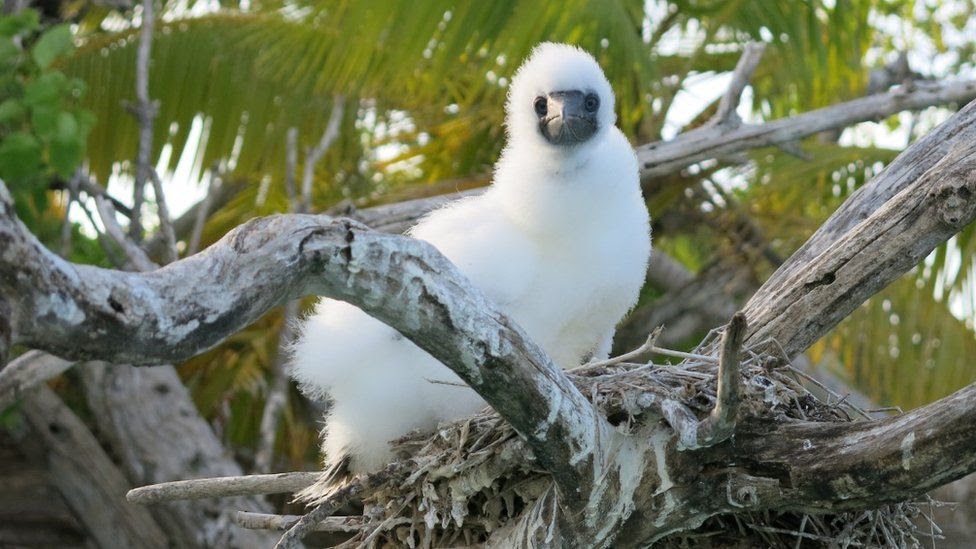 Image captionSeabirds like boobies nest far more abundantly on rat-free islands
He and his team were able to track the source of those nutrients back to the fish that seabirds fed on by analysing algae and sponges growing on the reef.
"We also found that fish on the reefs adjacent to islands with seabirds were growing faster and were larger for their age than the fish on reefs next to rat-infested islands," Prof Graham explained.
There were also significantly more fish on rat-free reefs than on those around "ratty islands".


Why does this matter?​

Coral reefs cover less than 0.1% of the ocean's area, but house about one third of ocean biodiversity.
"Coral reefs are also hugely threatened," said Prof Graham. "So anyone who cares about extinctions and biodiversity needs to care about the future of coral reefs."
Image copyrightNICK GRAHAM 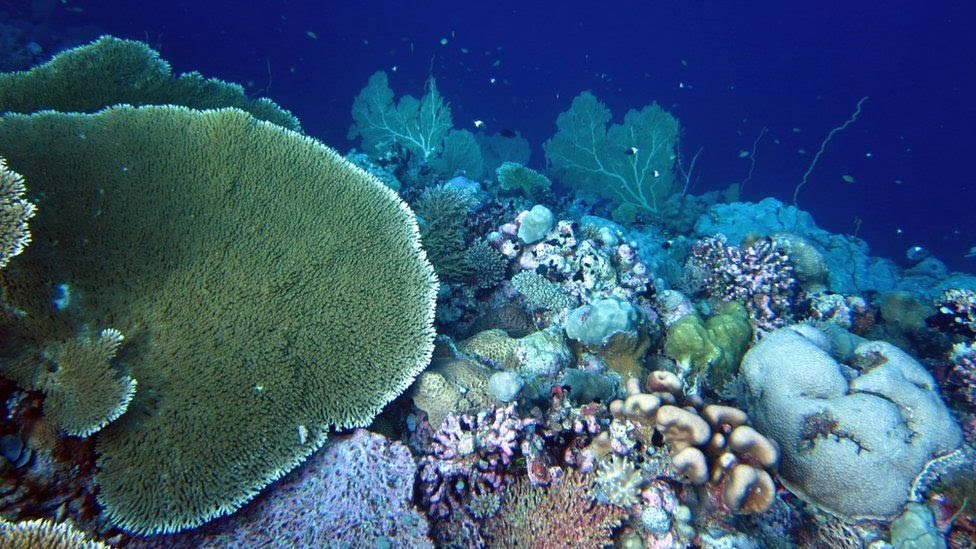 Image captionCoral reef systems are at "crisis point" because of climate change
The reefs and their abundance of marine life provide livelihoods for millions of people around the world, so the decline in coral reefs is poised to become a humanitarian crisis.
In an accompanying commentary article Dr Nancy Knowlton, a marine scientist from the Smithsonian's National Museum of Natural History in Washington DC , pointed out that, while "adding rats to the list of dangers faced by reefs might seem discouraging, the discovery of these negative impacts points directly to a specific strategy" that could slow the ongoing degradation of reefs.
That strategy - rat eradication on islands throughout the world - is exactly what the researchers who carried out this study now advocate.
"Coral reef systems are at crisis point because of climate change," said Prof Graham. "And we're desperately trying to find ways to enhance the resilience of coral reefs and allow them to cope with climate change.
"This is one of the clearest examples so far, where eradicating rats will lead to increased numbers of seabirds and this will bolster the coral reef."
Follow Victoria on Twitter
Reactions: Mowich, taxslave and Twin_Moose

Clear the Chinese from the South China sea would help as well Lol
Reactions: taxslave and petros

‘IT CAN NO LONGER BE FREE TO POLLUTE': Updated climate plan includes carbon tax hikes

Iceberg A68a has been on a slow journey toward potential disaster.

‘IT CAN NO LONGER BE FREE TO POLLUTE': Updated climate plan includes carbon tax hikes

Leftys never met a tax they didn't like.
Reactions: Twin_Moose

Didnt you read the propaganda?

“We are continuing to move forward and putting more money in the pockets of Canadian families by increasing the price on pollution.”
Click to expand...

Up is down and left is right . Makes sense to me .
Reactions: taxslave and Twin_Moose

If one goes south across the equator does right become left ?
Reactions: petros and Twin_Moose

I can't believe this part of the article where it says don't listen to Alta., Sask. and Ont. the majority of Canadians welcome the Carbon tax and the push to prevent Climate change

Waiting on the Supreme Court​

Revenue from the fuel surcharge will continue to be returned to Canadians in rebates, now on a quarterly basis. As the parliamentary budget officer confirmed in 2019, the vast majority of Canadian households receive more from the rebate than they pay out in extra costs.

Even while nearly two-thirds of Canadian voters were siding with a price on carbon, the provincial governments in Alberta, Saskatchewan and Ontario continued their legal challenge of the federal carbon price. If the Supreme Court rules against the federal government, the Liberals will have to adjust their approach.

But even if the federal proposal prevails, there is no guarantee that the conservative premiers in those provinces will give up the political fight — particularly now that the price is set to continue increasing......... More Here
Reactions: petros

That price will continue to increase by $10 a tonne a year until it reaches $50 in 2022. Trudeau announced increases will carry on and get steeper after that — $15 a tonne per year.

Trudeau said the tax will continue to be rebated and that most families should get more back than they pay.

"We are continuing to move forward and putting more money in the pockets of Canadian families by increasing the price on pollution."

Trudeau took aim at provincial premiers such as Jason Kenney in Alberta and Scott Moe in Saskatchewan, who have challenged the constitutionality of a federal carbon tax.

"There are some places in this country that still want to make pollution free again," he said. "We're not going to do that."

The Supreme Court is expected to rule in the new year on the provincial challenges to the carbon tax. Trudeau wouldn't say how a provincial victory could affect the plan.

He said the plan would result in jobs and investment leaving Alberta.

"The Trudeau government had previously committed to consultations on any increase to the carbon tax beyond 2022, but no such consultations with myself, the Environment Minister or the province occurred."

About $7 billion of the $15 billion in the plan had been previously announced for programs such as homeowner retrofits, tree-planting, conservation and zero-emission vehicle rebates.

The biggest piece of what's left — $3 billion — is to go to industry. Large industrial emitters will be able to apply for money for projects that either reduce emissions, bury them underground or offset them.

The industrial carbon tax is to rise along with the consumer price. But industries that compete internationally will continue to pay the levy only on emissions that exceed the average for their sector.

Municipalities are to receive $1.5 billion to improve the energy efficiency of buildings such as arenas and halls. Nearly $1 billion is to go to improving Canada's electrical grid.........More Here
Reactions: petros

Do you think Trudeau will survive beyond April 1 and the next tax hike?
Reactions: Twin_Moose

Yes with the support of the NDP and the Greens, the Bloc. will be a coin toss depending on what Trudie promises Quebec.
Reactions: taxslave

4 months is plenty of time for Justin lose the Dippers and le Bloc, he fucks up daily.
Reactions: Twin_Moose and taxslave

petros said:
4 months is plenty of time for Justin lose the Dippers and le Bloc, he fucks up daily.
Click to expand...

Trudeau has a son, watch out.. We will have another one in 20 years

Sorry to bust yer bubble. He isnt Castro's. From the mouth up hes the spitting image of Pierre.

The eyes have it.

petros said:
4 months is plenty of time for Justin lose the Dippers and le Bloc, he fucks up daily.
Click to expand...

Only the nose knows 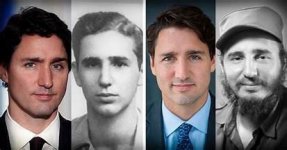 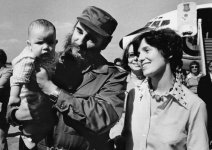