How the GW myth is perpetuated

You are using an out of date browser. It may not display this or other websites correctly.
You should upgrade or use an alternative browser.
C

For thousands of years, humans relied on their intuition to understand how the world works. Sure, the approach may have led to a few mistakes along the way -- it turns out the Earth isn't flat, for instance -- but ultimately it worked fairly well. Slowly but surely, humanity gained an understanding of everything from the laws of motion to thermodynamics, and all of it made intuitive sense.

And then came quantum mechanics, the absolutely baffling branch of physics exploring the very smallest types of matter. The study of quantum mechanics led to some truly astounding conclusions. For instance, scientists found that electrons behave both as waves and as particles, and the mere act of observing them changes the way they behave. Revelations like this one simply defied logic, prompting Einstein to declare "the more success the quantum theory has, the sillier it looks."

Einstein's sentiments still resonate today, more than a century after humanity's first insights into the quantum world; quantum mechanics makes perfect sense mathematically but defies our intuition at every turn. So it might surprise you that, despite its strangeness, quantum mechanics has led to some revolutionary inventions over the past century and promises to lead to many more in the years to come. Read on to learn about 10 practical applications of quantum mechanics.
Click to expand...

In the fall of 1945, the U.S. Army completed its work on ENIAC, the world's first vacuum-tube computer. All told, ENIAC weighed more than 30 tons (27 metric tons), had the footprint of a small house and cost nearly half a million dollars to create [source: Weik]. Fortunately, by the time ENIAC was built, Bell Laboratories was already well on its way to developing a replacement for power-hungry, space-consuming vacuum tubes: the transistor. Transistors act as both an amplifier and a switch for electronic signals, functions essential to virtually all modern electronic equipment, and without quantum mechanics, they likely wouldn't exist.

That's because transistors rely on the unique properties of semiconductors -- materials that can act as either a conductor or an insulator -- to operate. Thanks to groundbreaking discoveries in quantum mechanics, Stanford researcher Eugene Wigner and his student, Frederick Seitz, were the first to manipulate the properties of semiconductors in the 1930s. Armed with their research, scientists from Bell Laboratories developed the first rudimentary transistors over the next decade, and by 1954, the United States military had constructed TRIDAC, the first transistor-based computer. Unlike the monstrous, unreliable vacuum-tube computers that preceded it, TRIDAC occupied only 3 cubic feet (0.08 cubic meters) and needed only 100 watts of power to operate [source: PBS]. Today, companies like Intel and AMD fabricate cutting-edge microprocessors containing billions of microprocessors, and we have quantum mechanics to thank.
Click to expand... 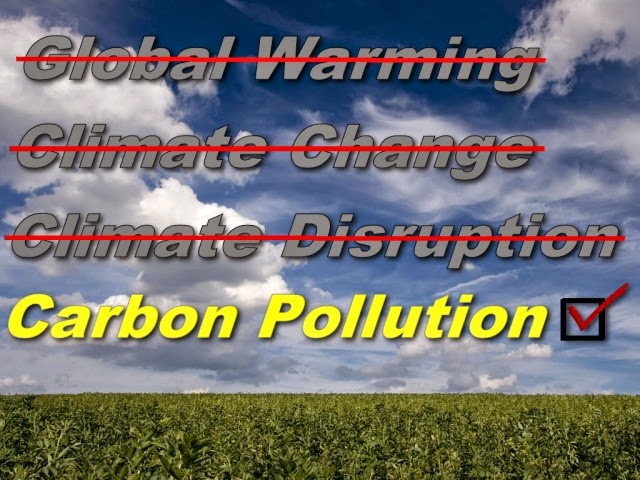 
When something isn't selling....Just change the packaging....oldest trick in the book.....
C

It's always been Global Warming no matter what the deniers want to try and spin it into.

The US Republican party is changing tactics on the environment, avoiding "frightening" phrases such as global warming, after a confidential party memo warned that it is the domestic issue on which George Bush is most vulnerable.

The memo, by the leading Republican consultant Frank Luntz, concedes the party has "lost the environmental communications battle" and urges its politicians to encourage the public in the view that there is no scientific consensus on the dangers of greenhouse gases.

"The scientific debate is closing [against us] but not yet closed. There is still a window of opportunity to challenge the science," Mr Luntz writes in the memo, obtained by the Environmental Working Group, a Washington-based campaigning organisation.
Click to expand...

The phrase "global warming" should be abandoned in favour of "climate change", Mr Luntz says, and the party should describe its policies as "conservationist" instead of "environmentalist", because "most people" think environmentalists are "extremists" who indulge in "some pretty bizarre behaviour... that turns off many voters".
Click to expand...

Cobalt_Kid said:
It's always been Global Warming no matter what the deniers want to try and spin it into.

When is it going to get warmer ?
Can I go camping this weekend without getting wet ?

Cobalt_Kid said:
It's always been Global Warming no matter what the deniers want to try and spin it into.
Click to expand...

Where have you been Rip?

A leaked draft of a report by the UN Intergovernmental Panel on Climate Change is understood to concede that the computer predictions for global warming and the effects of carbon emissions have been proved to be inaccurate.

The report, to be published later this month, is a six year assessment which is seen as the gospel of climate science and is cited to justify fuel taxes and subsidies for renewable energy.

The “summary for policymakers” of the report, seen by the Mail on Sunday, states that the world is warming at a rate of 0.12C per decade since 1951, compared to a prediction of 0.13C per decade in their last assessment published in 2007.

Other admission in the latest document include that forecast computers may not have taken enough notice of natural variability in the climate, therefore exaggerating the effect of increased carbon emissions on world temperatures.

"But the THEORY is STILL SOUND!"
--Every failed theorist in history
C

Meanwhile just a few threads over.

Mean while reality awaits the brainwashed.

pgs said:
When is it going to get warmer ?
Can I go camping this weekend without getting wet ?
Click to expand...

All of California Is Facing a Severe Drought or Worse - TIME

All of California Is Facing a Severe Drought or Worse - TIME

Drought among the worst in Texas in past 500 years - Houston Chronicle
Click to expand...

When do the models predict the oceans surface temps will warm to end the droughts? You do realize that is the cause right?

Study suggesting global warming is exaggerated was rejected for publication in respected journal because it was 'less than helpful' to the climate cause, claims professor

3,223 shares 357View
comments
+2
Professor Lennart Bengtsson, who claims his research on global warming is being 'covered up'

A scientific study which suggests global warming has been exaggerated was rejected by a respected journal because it might fuel climate scepticism, it was claimed last night.

The alarming intervention, which raises fears of ‘McCarthyist’ pressure for environmental scientists to conform, came after a reviewer said the research was ‘less than helpful’ to the climate cause.

Professor Lennart Bengtsson, a research fellow at the University of Reading and one of five authors of the study, said he suspected that intolerance of dissenting views on climate science was preventing his paper from being published.

‘The problem we now have in the climate community is that some scientists are mixing up their scientific role with that of a climate activist,’ he told the Times.

Prof Bengtsson’s paper suggests that the Earth’s environment might be much less sensitive to greenhouse gases than previously thought.

If he and his four co-authors are correct, it would mean that carbon dioxide and other pollutants are having a far less severe impact on climate than green activists would have us believe.

The research, if made public, would be a huge challenge to the finding of the UN’s Intergovernmental panel on Climate Change (IPCC), that the global average temperature would rise by up to 4.5C if greenhouse gases in the atmosphere were allowed to double.

The paper suggested that the climate might be less sensitive to greenhouse gases than had been claimed by the IPCC in its report last September, and recommended that more work be carried out ‘to reduce the underlying uncertainty


More: Study suggesting global warming is exaggerated was rejected for publication in respected journal because it was 'less than helpful' to the climate cause, claims professor | Mail Online

The smell of fear;

Dear readers, I wanted to do something special for my hundredth post at this site. I picked out a great topic for discussion. I wrote a post with clever prose, jokes that'd make your stomach ache from laughter and even some insightful commentary. Unfortunately, I can't post it because I'd get sued.


University of Queensland threatens lawsuit over use of Cook’s ’97% consensus’ data for a scientific rebuttal | Watts Up With That?


No, no, no. You have it all wrong. The climate models*, upon which much has been spent, were never meant to be accurate.

I have rated the potential impact in the field as high, but I have to emphasise that this would be a strongly negative impact, as it does not clarify anything but puts up the (false) claim of some big inconsistency, where no consistency was to be expected in the first place.​
Except, of course, when used as a basis for public policy and taxpayer funding. Then they're the Holy Writ.

IOP: expecting consistency between models and observations is an “error” Â« Climate Audit

model - definition of model by the Free Online Dictionary, Thesaurus and Encyclopedia.

None of the models work with a reliable ocean current model which don't exist.

The sin of Warmism passes from parent to child like Original Sin.

Antarctica’s ice losses on the rise – with a sanity check

From Geophysical Research Letters and the University of Leeds:


Three years of observations show that the Antarctic ice sheet is now losing 159 billion tonnes of ice each year — twice as much as when it was last surveyed. See below for some sanity check calculations on why 159 billion tonnes really isn’t much more than a flyspeck in the scheme of things.

Antarctica’s ice losses on the rise


From Climatesanity: Conversion factors for ice and water mass and volume


If one cubic kilometer of water (i.e., one gigatonne of water) is spread evenly over the entire 361 million square kilomters, the thickness of the new layer of water will be given by:

​
That is, one cubic kilometer of water (i.e., one gigatonne of water) will add less than 3 millionths of a meter to the oceans!


Antarctica’s ice losses on the rise – with a sanity check | Watts Up With That?

Even less scary when ice is already floating.

Ice has a greater mass than water and upon melting will 'shrink'... That said, 1 KM3 of ice will add less than 3 millionths of a meter to the ocean's elevation

PS - If that ice was floating in the ocean to begin with, it was displacing a calculable volume of water in the first place.. If it melts, it will have an even smaller impact

KERRY: If We're Wrong on Climate Change, 'What's Worst That Can Happen?'

Kool Aid, Kool Aid, tastes great.
I guess his funding was going to be cut off.
'I Recant' Says Author of Infamous Seventies Newsweek 'Global Cooling' Article
You must log in or register to reply here.
Top Bottom