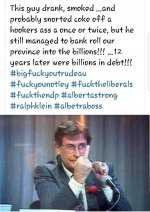 Fuck Jason Kenney, he has screwed up this Province so much..

Fuck Jason Kenney, he has screwed up this Province so much..
Click to expand...

Just like the NDP before him!
Reactions: taxslave and B00Mer

Why would anybody think politicians have any answers . They are just pretty faces that learned how to speak without saying anything.
Reactions: taxslave, Decapoda and Dixie Cup 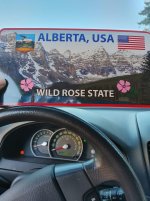 Don't you need to see out your front windshield?

IdRatherBeSkiing said:
Don't you need to see out your front windshield?
Click to expand...

No worries, engine's at idle and looks like he needs a tune up.
Reactions: Twin_Moose

IdRatherBeSkiing said:
Don't you need to see out your front windshield?
Click to expand...

The view is probably better on the License plate

Tracy Allard calls the threats and intimidation inexcusable and says her private life and her family are out of bounds to protesters.


“It was really disturbing,” Allard said at the legislature Tuesday.

“The most disturbing piece for me was at the end of it they left a noose — and that is a clear act of aggression and utterly unacceptable.”

Allard, a United Conservative backbencher for Grande Prairie, said she was travelling to Edmonton on Sunday afternoon when she got a call about a large crowd in front of her house.

She said doorbell cam footage later revealed it was about 30 people.

Allard said the protesters left behind a crude wooden gallows, with a noose, and the words “No to masks. End the gov’t. Hang ‘em all.”

She posted a picture of it on her Facebook page .

RCMP confirmed they were called to investigate the large gathering in front of Allard’s home around 3 p.m. Sunday.

Const. Lindsay Ralph said officers attended the protest and saw the gallows and noose attached upright to a fence.

“They did see that stick with the noose on the end. It was attached to a fence located near the property,” Ralph said in an interview.

Article content
“Officers did speak to the people in attendance and explained to them that (it) should be removed, and they did take it down.”

She said no charges were laid, but Allard said she is looking to see if the police will investigate further.

This was not the first time an Alberta politician has faced public backlash for rules tied to the COVID-19 pandemic response.

Premier Jason Kenney’s government has faced criticism from Albertans, including some of his rural caucus members, for previous health restrictions, mask rules and more recently for a form of vaccine passport that severely curtails customer capacity for non-participating businesses.

Article content
Allard has previously urged people to get vaccinated but said she respects the right to choose. She has called for more COVID-19 testing and more hospital surge capacity to fight the coronavirus.

In the spring, she was among a number of UCP backbenchers who signed a public letter criticizing a return to previous health restrictions.

“I believe that I have the reputation for listening, for understanding instead of listening to be right or make somebody else wrong. I’m open to different perspectives,” she said.

“This particular group (of protesters) wants — I’m not sure exactly what they want. Freedom is the word I keep hearing, although I don’t know who they are, so I can’t even have a conversation with them.”

Allard made headlines at the start of the year when she resigned as municipal affairs minister after it was revealed she took a Christmas vacation to Hawaii.

She was among a number of United Conservative legislature members and staff to take holiday trips to hot spots despite Kenney’s government urging Albertans to stay home to reduce the spread of COVID-19.

Allard choked up as she told reporters, “2021 has been a very rough year for my family.

“As a woman in politics, I think it’s been really challenging to see how cruel people can be,” she said. “I’m thinking of my daughter, who has faced significant backlash as the daughter of a politician, and that should not be the case.

“I apologize for getting so emotional, but I think it’s important.”

EDMONTON — An Alberta member of the legislature says she is outraged after COVID-19 protesters came to her house on the weekend and hung up a noose. 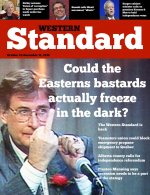