Has no idea what Article 4 is, clearly.

Stuff your Bolshevism up your Katsap sroka.
Reactions: Twin_Moose

Tecumsehsbones said:
Has no idea what Article 4 is, clearly.
Click to expand...

Katsaps are a century behind. They are the FASD hillbillies of Europe and Asia.
Reactions: Twin_Moose

Dixie Cup said:
Apparently, the S-300 missals are only used by the Ukrainian military.
Click to expand...

The engines were originally made by Ukraine for all of the USSR then after independence Russia started making them as well, the S 300's are the old system Russia upgraded now to the S 400 and 500's but still have a huge inventory of the S 300's

Me thinks a deal is getting close

Zelensky says ‘I don’t know what happened’ over Poland blast​

Ukrainian President Volodymyr Zelensky said Thursday he was not fully sure what led a missile to fall on a Polish village near the Ukrainian border, after laying blame on Russia.

“But it is impossible to talk about something specific today — that it was the air defence of Ukraine.”

If a suface to air, that grain drier will be riddled with bow tie shrapnel holes.

Is it loaded with bow tie holes? 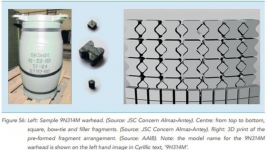 attacked country by taking "such action as it deems necessary, including the use of armed force."​

However, each country has no obligation to respond militarily.

It added in a statement: "No strikes on targets near the Ukrainian-Polish state border were made by Russian means of destruction."

The Kremlin did not immediately respond to requests for comments.

Russia was pounding cities across Ukraine with missiles on Tuesday, in attacks that Kyiv said were the heaviest wave of missile strikes in nearly nine months of war. Some hit Lviv, which is less than 80 kilometres from the border with Poland.

With files from Reuters and CBC's John Mazerolle
Click to expand...

Oh boy, just more anti-Russian nonsense coming from the pro-Nazi Zelensky mob here. They know phuk all about who may be responsible, but yet they like to act and pretend like they really know as to who the bad guy is here. The Zelensky mob here could careless as to what is going on in Ukraine. If it were not for the MSM western media constantly talking about Ukraine those pro-Zelensky mobsters here would be probably bitching about conservatives like usual.. Well, at least this Ukraine bullshit has taken a bit of the heat off our conservatives back.
You must log in or register to reply here.
Top Bottom