Now she is out of the Drake video.

Mowich said:
Those claws of hers would make a raptor envious.
Click to expand...

Did she go to Court or a welding class?

VERIFIED: Chair Girl receives Instagram's coveted check mark
Eddie Chau
Published:
January 6, 2020
Updated:
January 6, 2020 5:24 PM EST
Chair Girl Marcella Zoia has received a verified badge on Instagram to ensure that it's indeed her. (Instagram)
Toronto’s Chair Girl is now Instagram official.
If there was ever doubt that Marcella Zoia was truly the mastermind behind her page of clevage-baring selfies, then that blue check mark on the top of the page should put that to rest.
The Facebook-owned photo and video sharing site recently awarded Zoia with its coveted verification badge, an authentication mark that’s previously been given to notable celebrities, professional athletes, media personalities and influencers.
According to Instagram, “Verified badges help people more easily find the public figures, celebrities and brands they want to follow.”
To get a verified badge, Instagram states that account holders must meet certain requirements.
Story continues below
These criteria include being authentic (representing an actual person or business), unique, have a complete bio, profile picture and at least one post, and be a notable entity that’s highly searched by other users.
GIRL GONE WILD: How Toronto's Chair Girl spends her summer break
Chair Girl could hurt her case by partying in Punta Cana
BRAUN: Chair Girl still getting lots of attention
It’s not known when Zoia got verified, but there’s no doubt her chair-throwing infamy, endless selfies and bikini-baring vacation posts attracted plenty of attention to earn her the distinction.
Zoia became famous after a video of her tossing a chair off the 45th floor of a condo balcony in February 2019 went viral. The woman pleaded guilty to mischief causing danger to life in relation to the idiotic incident.
She is currently awaiting sentencing for her charges. The Crown is seeking a six-month jail sentence.
Zoia currently has 43,400 followers on Instagram.

Chair Girl disputing the posting of infamous toss video
Sam Pazzano Courts Bureau
Published:
January 14, 2020
Updated:
January 14, 2020 4:17 PM EST
Chair Girl’s fling at fame has been extended to next month.
The sentencing for Instagram sensation Marcella Zoia, now 20, was postponed from Tuesday until Feb. 7 because she’s disputing that she posted the video of her hurling a chair from a 45th-storey balcony to her Snapchat account last February.
It’s the initial video that went viral and her Instagram has been since fuelled by Zoia’s posting of cleavage-baring, partying selfies. It’s now a verified account, a status afforded to celebrities and brands that people wish to follow.
Crown attorney Heather Keating will aim to prove that Zoia posted the chair-throwing video to her Instagram account as an aggravating factor.
“The Crown’s theory is she posted the video and the Crown thought it was a non-contentious issue,” Zoia’s lawyer, Greg Leslie, told reporters outside court. “Zoia said she didn’t post this video to Snapchat.
“She is the one tossing the chair so she’s not taking the video.”
Leslie said the prosecution has to prove this fact beyond a reasonable doubt to buttress its bid to get a six-month jail sentence for his client.
“She shouldn’t serve any time in jail. She should get a suspended sentence, regardless of the posting of the video,” said Leslie. “She’s working as a model right now. It’s aggravating if she posted it because she’s trying to get on social media to benefit herself.
“She’s anxious. She’s under duress. She wants this to be over with. She’s not going to admit to something she didn’t do.”
Zoia pleaded guilty in November to public mischief causing danger to life.
VERIFIED: Chair Girl receives Instagram's coveted check mark
'Chair Girl' Marcella Zoia in, then out, of new Drake video
HUNTER: OMG! Chair Girl crashes to earth with guilty plea
She appeared briefly on a dance floor in a Drake video but was edited out of the video almost immediately, something Leslie thought was unnecessary.
Zoia currently has 43,400 followers on Instagram.
spazzano@postmedia.com

Chair Girl irks judge by showing up late for court
Kevin Connor
Published:
February 4, 2020
Updated:
February 4, 2020 7:59 PM EST
Marcella Zoia, 19, is pictured while leaving Toronto's College Park courts on Feb. 13, 2019. (Jack Boland, Toronto Sun)
A judge took the young woman known as Chair Girl to task when she showed up late for court on Tuesday.
“I’m astonished,” Judge Mara Greene said to Marcella Zoia. “I do have another case of great importance.”
Zoia is scheduled to be sentenced Friday at Old City Hall for throwing a chair off a 45th-storey condominium balcony towards the Gardiner Expressway in February 2019.
No one was injured as a result of the chair toss. Video of the incident went viral.
The 20-year-old has pleaded guilty to one count of causing danger to life.
On Tuesday, she was in court to hear Crown attorney Heather Keating argue that there’s an onus on Zoia to prove that she didn’t post a video of her tossing the chair on social media.
Zoia has maintained she didn’t post the video.
Chair Girl disputing the posting of infamous toss video
VERIFIED: Chair Girl receives Instagram's coveted check mark
CRIME HUNTER: Executed spree killer's moll wants full pardon
Keating argued that while she has no proof that Zoia pushed the button to put the video online, it’s logical to assume the young woman posted it.
Greene will rule on the Crown’s motion at a later time.
The Crown is calling for Zoia to be jailed for six months while the defence is asking for a suspended sentence.
http://torontosun.com/news/local-news/chair-girl-shows-up-late-for-court

MANDEL: Chair Girl should lose phone, go directly to jail
Michele Mandel
Published:
February 7, 2020
Updated:
February 7, 2020 8:06 PM EST
Surely her 15 minutes were up long ago.
It’s time Chair Girl, aka Marcella Zoia, turns off her cellphone, stops preening and selfieing her puckered duck lips, and takes her ill-earned notoriety directly to jail.
Only then is there a chance that these publicity-seeking, self-obsessed millennial narcissists get the message that endangering others by doing something stupid on social media may earn them thousands of likes but it will also cost them their freedom.
“It was just jokes,” Zoia told her probation officer.
This was not funny.
As Crown Heather Keating said in her sentencing submission Friday, it’s “lucky someone didn’t get killed.”
As we all know ad nauseam, Zoia was filmed sending a wood and metal chair hurling off a 45th-floor balcony to the ground below last February, narrowly missing cars on the Gardiner Expressway and pedestrians walking below near the Lake Shore, including a woman pushing a stroller.
The video, which she admits was filmed on her cellphone but denies posting to her account on Snapchat, went viral and made Chair Girl into an international sensation.
It also proved to be conclusive proof of her crime. The aspiring medical aesthetician turned herself into police and pleaded guilty in November to mischief causing danger to life.
At her sentencing hearing, the prosecutor brought the mangled chair into the grand Old City Hall courtroom and argued denunciation and deterrence should be the key goals since Zoia has turned her infamy into a “brand” she’s still trading on to this day.
Zoia is now modelling and even had a fleeting cameo appearance in a Drake music video before the superstar had her edited out, saying “certain people we don’t condone.”
Zoia told her probation officer she hates all the attention. Like most of us, the prosecutor found that hard to believe.
Keating urged Justice Mara Greene to send the self-created social media sensation to jail for four to six months and order 240 hours of community service, alcohol abuse counselling and two years of probation.
“The public will be aware that when you do something like this, you will go to jail,” the Crown insisted.
But what might hurt her most of all, Keating also requested a ban on Zoia’s posting to social media for a period of time to be determined by the judge.
At that recommendation, Zoia suddenly stopped flicking her long blonde hair and examining her hot pink nails. It hardly seemed possible but her selfie pout face became even more puckered at the possibility.
related links Chair Girl irks judge by showing up late for court
Chair Girl disputing the posting of infamous toss video
Defence lawyer Gregory Leslie insisted a jail term and social media ban were too harsh — that Zoia was young, suffering from alcohol issues, peer pressure and ADHD. A suspended sentence and two years of probation would be punishment enough, he said.
Asked if she had anything to say, Zoia read from a handwritten statement: “I am sorry, I know that people could have been seriously hurt as a result of my actions,” she said.
“I never intended to hurt anybody and I know this was a very immature and stupid mistake, which I take full responsibility for.”
The statement read by Marcella Zoia, aka Chair Girl, during her sentencing hearing at Old City Hall court on Friday, Feb. 7, 2020.
In a soft voice, Zoia added that she recognizes she needs counselling in alcohol and mental health and has a lot of “growing” to do. “Once again, I am very sorry for my actions, I am aware that someone could have been hurt or I could have caused an accident, that was never my intention.”
The prosecutor had a hard time believing she’s truly remorseful and also doubted Zoia’s claim that she wasn’t the one who posted the video.
“Quite simply this is nonsense,” she said.
Because for this generation, it didn’t happen if it wasn’t captured and shared on your phone.
During the proceeding, Zoia’s friend pulled out a cellphone and actually took her photo in court — despite being told by the ancient columnist behind her that it’s strictly verbotten.
She hissed at me.
Everyone expected — hoped — this never-ending Zoia saga was finally coming to an end on this day, but Greene announced she won’t deliver her sentence until March 12.
And so the circus continues.
Just before exiting the courthouse to the waiting throng of photographers and videographers, Chair Girl — the one who supposedly hates all the publicity — pulled out her phone to check her lipstick and her hair.
mmandel@postmedia.com
http://torontosun.com/news/local-news/mandel-chair-girl-should-lose-phone-go-directly-to-jail 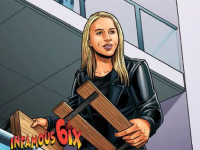 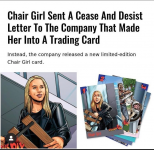 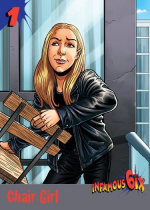 Chair Girl may be on a trading card, but her manager is hoping to put a stop to that by threatening legal action.

I would love to be a trading card!

Except, no one would want to collect me.

Chair Girl is apparently throwing a hail Mary to extend her 15 minutes of fame.

torontosun.com
Reactions: TheShadow
You must log in or register to reply here.
Top Bottom