Why doesn't each side start with the same number of strikes?
Reactions: Twin_Moose

IdRatherBeSkiing said:
Why doesn't each side start with the same number of strikes?
Click to expand...

Apparently the City struck a settlement deal with the Floyd family

Mayor Jacob Frey will join other elected officials and members of Floyd’s family on Friday afternoon for a news conference to discuss the settlement, the city announced.


Floyd, a 46-year-old Black man, died in May as Derek Chauvin, a white Minneapolis police officer, kneeled on his neck for nearly nine minutes. Floyd’s dying pleas for help were captured on widely seen bystander’s video, which helped spark one of the largest protest movements ever seen in the United States.

The trial of Chauvin, who was fired by the police force, began earlier this week in Hennepin County’s district court on charges of murder and manslaughter. Chauvin has pleaded not guilty and said he properly followed his police training.

This advertisement has not loaded yet, but your article continues below.
Article content
Judge Peter Cahill has set aside about three weeks for jury selection in the high-profile case. So far, six jurors have been seated.


The settlement announced on Friday includes a $500,000 contribution from Floyd’s family to the community at the Minneapolis intersection where Floyd died, which has been barricaded against police access by residents and is filled with flowers and other tributes to Floyd.

Chauvin was helping arrest Floyd on the evening of May 25 on suspicion of his using a counterfeit $20 bill to buy cigarettes at the Cup Foods grocery store at the intersection.

The other three officers are due to go on trial later this year on charges of aiding and abetting Chauvin in Floyd’s death, which was ruled a homicide by the medical examiner. The Minneapolis Police Department fired all four officers the day after the deadly arrest.

The city of Minneapolis will pay $27 million to settle a lawsuit by the family of George Floyd over his death in police custody, a case that stirred national…

Resist arrest for 8 minutes and your family gets money for nothing.
Reactions: Twin_Moose 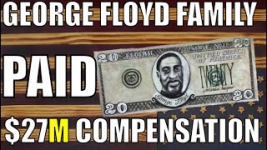 Crime pays, especially when you weren’t killed and you’re a member of a protected demographic it seems.

petros said:
Resist arrest for 8 minutes and your family gets money for nothing.
Click to expand...

It should be the innocent coppers, wrongly arrested for murder, who get paid the compo.

If cops were better funded it would probably be easier to restrain a flailing whacked out junkie with more members able to respond to a situation.
Reactions: Twin_Moose

Imagine being one of those jurors and they all decided to come back with a not guilty verdict? There will be riots in the streets and those jurors may be found out as to who they are and then be assaulted and maybe have to run for their lives. I heard that cop Chauvin has a good chance of possibly winning his trial. Oh-oh.
Reactions: Twin_Moose
T

Just BLM and Antifa having a little excitement and letting off steam for themselves. We all have to be use to this by now. Until some politicians decide to call BLM and Antifa a bunch of domestic terrorists they will continue on with their bull shit. Pretty much Trumps supporters have been called racists and white supremacist domestic terrorists by the FBI. Yet those same supporters have come nowhere close to what those communist red guard BLM and Antifa thugs have been doing for over a year now. WTH, eh?
Reactions: Twin_Moose and petros

taxme said:
Imagine being one of those jurors and they all decided to come back with a not guilty verdict? There will be riots in the streets and those jurors may be found out as to who they are and then be assaulted and maybe have to run for their lives. I heard that cop Chauvin has a good chance of possibly winning his trial. Oh-oh.
Click to expand...

Is he being defended by Robert Shapiro or Johnnie Cochran ?
Reactions: Twin_Moose and petros
T

DaSleeper said:
Is he being defended by Robert Shapiro or Johnnie Cochran ?
Click to expand...

Calling the timing of Friday’s settlement announcement “unfortunate,” Judge Peter Cahill of the Hennepin County District Court said he would recall seven jurors seated last week to ask if they had seen news of the settlement and whether it would affect their impartiality.


“I wish city officials would stop talking about this case so much,” the judge said before resuming jury selection on Monday morning. “At the same time, I don’t find any evil intent that they are trying to tamper with the criminal case.”

Chauvin, who is white, was captured in a bystander video with his knee on Floyd’s neck for nearly nine minutes as Floyd, a 46-year-old Black man in handcuffs, cried out for his life. The death ignited global protests against racism and police brutality. The Minneapolis Police Department fired Chauvin and three other officers involved in the arrest the next day.

This advertisement has not loaded yet, but your article continues below.
Article content
Floyd’s family filed a federal wrongful-death lawsuit against Chauvin and the city last year. The city called a news conference to announce the settlement, which included emotional comments by Floyd’s brothers and Mayor Jacob Frey.

“By my count, this is the third highly prejudicial press leak or press release that has very suspicious timing, to say the least, and has an incredible propensity to taint a jury pool,” he told the court.

Besides asking to recall the seven jurors already seated, Nelson requested the judge reconsider his request to move the trial to a different county, which Cahill said he would do.

Prosecutors from the Minnesota attorney general’s office told the court they had no control over the city’s mayor, council or news media.

“You would agree that this is unfortunate, wouldn’t you?” the judge responded to the prosecutors. “That we have this reported all over the media when we’re in the midst of jury selection?”

Cornell University law professor Valerie Hans, who studies the jury system, said the settlement’s impact could be mixed. Minneapolis’ move to settle may suggest to potential jurors that the city thought Chauvin was in the wrong, she said by email.


“However, the substantial size of the settlement might give people — including jurors, if they hear about it — a sense that the Floyd family has been compensated for the wrong done to their family member, which could lessen the urge to punish Chauvin and the other police officers by convicting them,” she said.

This advertisement has not loaded yet, but your article continues below.
Article content
Sarah McKenzie, a city spokeswoman, said city leaders were “following Judge Cahill’s guidance” and declined to comment.

The judge dismissed the first potential juror seen on Monday, who appeared to be a white woman in her 50s, after she expressed surprise at the size of the settlement, saying it suggested the city felt it could not win a civil trial.

Two additional jurors were seated on Monday, bringing the total to nine.

They joined seven jurors seated last week who comprise three white men, one Black man, one Hispanic man, one mixed-race woman and one white woman, according to the court. Cahill has promised the jurors anonymity for the trial’s duration.

The eighth juror, a Black man with a banking background, said he strongly supported the message of the Black Lives Matter movement and that he could be impartial in weighing Chauvin’s conduct.


“I don’t think he had any intention of harming anyone,” he said of Chauvin, “but somebody did die.”

The ninth juror, a white woman in her 50s, said she was a single mother working as an executive assistant. When asked her views on Black Lives Matter, she said that, above all, “all lives matter.”

The court plans to have opening arguments commence on March 29. Chauvin faces up to 40 years in prison if convicted on the most serious charge.

The judge in the trial of Derek Chauvin, the former Minneapolis police officer charged with murdering George Floyd, said on Monday he was concerned publicity…