What is the deal?

Russia totally abandons the region and leaves them alone?

Have not heard the deal yet.

Hoid said:
Have not heard the deal yet.
Click to expand...

A good story turns to a Trump hit piece

The Russians should give Crimea back to the English: https://www.caitlingreen.org/2015/05/medieval-new-england-black-sea.html?m=1

Blackleaf said:
The Russians should give Crimea back to the English: https://www.caitlingreen.org/2015/05/medieval-new-england-black-sea.html?m=1
Click to expand...

A good story turns to a Trump hit piece
Click to expand...


Did you really expect anything else?

Do you actually pray to Trump, or are you waiting for a second term?

Now that Trump is gone is Russia testing Biden?

Russian forces massing on the border with Ukraine have prompted the U.S. European Command to raise its watch level to its highest point of “potential imminent crisis”, according to a New York Times report Tuesday night. On Wednesday, Chairman of the Joint Chiefs of Staff Gen. Mark Milley spoke to senior Russian Gen. Valery Gerasimov about the buildup, according to Russia. 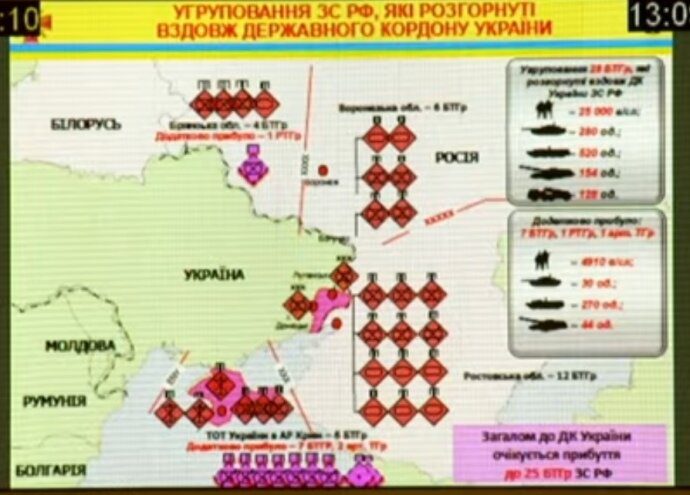 Four Ukrainian soldiers were killed last week in an extended battle in the contested Donetsk Region against Russia-backed separatists. Russian forces that were thought to have gathered for training exercises near the border have stayed and grown in numbers, prompting concerns.

Under Presidents George W. Bush and Barack Obama, Russia under Vladimir Putin took territory in the former Soviet republics of Georgia and Ukraine, respectively. When Donald Trump was president, Russia took no territory. Now with Joe Biden in the White House, Russia appears to be testing his mettle.

NY Times excerptt:
The war in eastern Ukraine, which has been on a low simmer for months, drawing little international attention, has escalated sharply in recent days, according to statements on Tuesday from the Ukrainian and Russian governments.

In the deadliest engagement so far this year, four Ukrainian soldiers were killed and another seriously wounded in a battle against Russian-backed separatists in the Donetsk Region of eastern Ukraine, the country’s military said.

The soldiers’ deaths, along with a buildup of Russian forces on the border, has seized the attention of senior American officials in Europe and Washington. In the past week, the U.S. military’s European Command raised its watch level from possible crisis to potential imminent crisis — the highest level — in response to the deployment of the additional Russian troops.

Some officials believe Russia is mostly engaging in saber rattling and is not eager to renew its offensive. Others are more worried, believing that Mr. Putin’s intentions are not clear and that an operation meant to test a new president could quickly escalate into something more ominous.

This week, Gen. Tod D. Wolters, the head of U.S. European Command, raised the American military’s watch level for the second time in several days after Russian troops failed to leave Ukraine’s border region. American strategists had expected the troops to depart the area, about 30 miles from Ukraine’s border, after the conclusion of a military exercise on March 23.

American estimates of how many additional Russian troops had been sent to the border have varied. One official said there were roughly 4,000......More

The EU started this war.

A good place to keep up to what's happening

A deepening water crisis in Crimea is putting severe strain on the Russian government’s finances and increasing pressure on Moscow to deliver on the promises it made when illegally occupying the peninsula, internationally recognised as Ukrainian territory, in 2014.

This crisis dates back to 2014 when Crimea, already under Russian occupation, voted in a referendum widely regarded as not free or fair to become a province of the Russian Federation. Ukrainian authorities subsequently blocked the North Crimean Canal which had been supplying over 85 per cent of the peninsula’s water supply.

Crimea has always been an arid region with comparatively little rainf and snowfall. What rivers there are are significantly smaller in volume than the Dnipro, for example. In the 1950s, only 155 out of 926 settlements had consistent access to clean drinking water. This prompted Soviet authorities to begin constructing the Crimean Canal in 1957 – three years after administration of Crimea was transferred to the then Ukrainian Soviet Socialist Republic.

Completed in 1971, the canal diverted water from the Kahkovka Reservoir in southern Ukraine, fed by the Dnipro. With independence, maintenance of the canal was neglected and by 2013, water flows were just one-third of 1980s levels. Despite this, the situation did not reach critical levels until the canal was fully dammed in 2014.

For Ukraine, blocking the canal was one of the few methods it could employ to put pressure on Russia.

Although a statement by the Ukrainian Foreign Ministry asserted that “Russian occupation authorities in Crimea demand water for the accelerated development of military enterprises and facilities”, this explanation doesn’t quite hold up to scrutiny. According to Ukraine’s Deputy Foreign Minister Emine Dzheppar (herself a Crimean native), there are currently 32,500 Russian troops stationed in Crimea. Even if Russia were to scale this up to 100,000, this would still be a fraction of the population of the peninsular, which has risen to over three million since its secession.

Instead, the Ukrainian blockade can be seen as a tactic to hike the costs of Russia’s administration of Crimea – an asymmetric sanction of sorts.

And it certainly has been effective: according to former deputy head of Russia’s Central Bank, Sergei Aleksashenko, the first five years of the occupation cost Russia 1.5 trillion roubles (roughly 23 billion US dollars in 2019). This represents three years of Russian state expenditure on healthcare.

Satellite images from as early as 2018 show increasing desertification in the already arid region, particularly in the central and northern steppes. Agricultural output has plummeted, with cultivation of water-intensive crops like rice coming to a halt. In 2014, only 17,000 hectares of land were being tilled, compared to 140,000 the previous year and 400,000 in the Soviet era.

People are reported to be selling their property in the most severely affected areas for knockdown prices. Weather conditions last year exacerbated the crisis: 2020 saw a mild winter with little snowfall followed by a scorching summer, the driest year in 150 years in Crimea. This further depleted alternate sources of freshwater, like smaller reservoirs and underground streams.

Any question of resuming the flow of water to Crimea is shot down by political considerations with representatives of both Ukraine and Russia using inflammatory language.

On March 1, Arsen Avakov, Ukraine’s minister of internal affairs, said in an interview that “Ukraine will not supply water to Crimea until it returns to Ukraine”.

Russia’s permanent secretary to the Organisation for Security and Co-operation in Europe (OSCE), branded Ukraine’s blockade of the canal as an “attempt at genocide” – although according to the Geneva Conventions, the responsibility of providing water to an occupied territory is borne by the occupier.

Elizabeth Thorsell, a spokesperson for the UN High Commissioner for Human Rights called on both Kyiv and Moscow to do their part in providing water to Crimea...........More

Russia moved military hardware from Siberia to near Ukraine #shorts​

Ashley Mulroney, Director of Canadian Development Program in Ukraine, said that Canada is proud to support the mobile service delivery network in the conflict-affected communities of Donetsk and Luhansk regions. “We hope this mobile ASC will help the Kurakhove community to ensure that each and every member of the community has access to quality administrative, social and legal services. A needs-based and citizen-focused service provision is a key priority for Ukrainian Government and we are happy to support this effort and make sure it reaches the most vulnerable conflict-affected Ukrainians.”

The mobile ASC will provide services almost identical to those that are currently available at stationary centres. For example, people will be able to:

Manal Fouani, UNDP Deputy Resident Representative in Ukraine, said that developing a public and administrative services network is an essential element of the reform agenda.

"We’re striving to systematically support local authorities in bringing administrative services closer to vulnerable groups in remote communities," Fouani said. "Together with partners, we’re thinking of sustainable ways and methods to operate the service system and keep pace with the times, and meeting new digital standards."

Fouani also stressed that the priority is to ensure that children, young people, people with disabilities, the elderly, internally displaced persons and other vulnerable groups are not left behind.
-
-
-
-
-

Twelve international partners support the Programme: the European Union (EU), the European Investment Bank (EIB), the U.S. Embassy in Ukraine, and the governments of Canada, Denmark, Germany, Japan, the Netherlands, Norway, Poland, Sweden & Switzerland.
You must log in or register to reply here.
Top Bottom