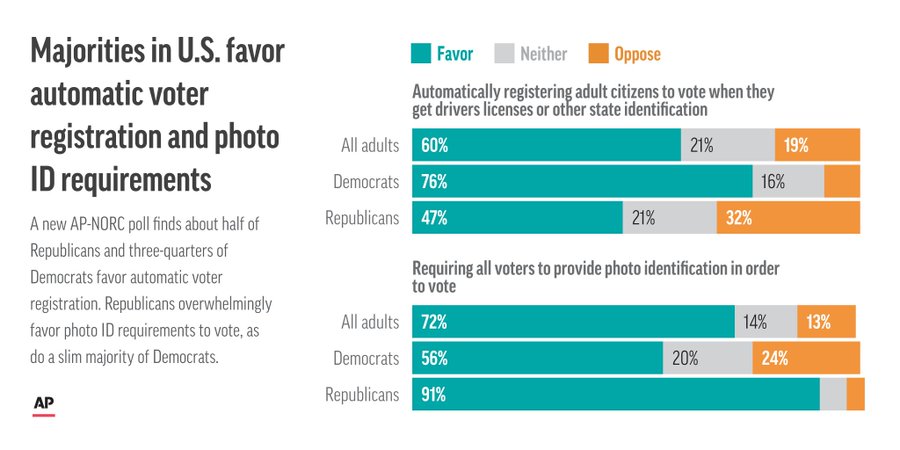 Giuliani’s lawyer said in a court filing that Dominion Voting Systems’ lawsuit should be dismissed for lack of jurisdiction, and because the company has not adequately justified its request for money damages.


The filing said Giuliani denies defaming Dominion, adding that the former New York City mayor would present a more forceful defense on the merits if his jurisdictional arguments are rejected by the federal judge in the District of Columbia who is assigned to the case.

“Should this matter reach legal or factual adjudication on the merits, Giuliani will provide a vigorous and complete response,” the court filing stated.

Megan Meier, a lawyer for Dominion, said in a statement that “Giuliani said he wanted to present the ‘evidence’ for his defamatory statements about Dominion, but now he’s trying to avoid a trial and still offering no evidence at all.”

This advertisement has not loaded yet, but your article continues below.
Article content
Trump and his allies spent two months denying his election defeat, and claiming without evidence that it was the result of widespread voter fraud, before the then-president’s supporters launched a deadly attack on the U.S. Capitol on Jan. 6.

Denver-based Dominion alleged in its Jan. 25 lawsuit that Giuliani “manufactured and disseminated the ‘Big Lie,’ which foreseeably went viral and deceived millions of people into believing that Dominion had stolen their votes and fixed the election.”


Dominion said it filed the lawsuit “to set the record straight” and to “stand up for itself, its employees, and the electoral process.”

Founded in 2002, Dominion is a major U.S. manufacturer of voting machines, and various Dominion machines were used in more than two dozen states during the 2020 election.

Trump adviser Giuliani asks judge to throw out $1.3B lawsuit over his 'big lie' election claims

Based on the affidavits and other evidence, the judge in the case found probable cause to conditionally unseal the county's ballots for a forensic audit. Voter GA was given until March 25 to submit a plan to the judge detailing what the audit would look like — which experts they were going to use, where the audit would take place, etc.

Last week, Raffensperger, who is not a party to the suit, filed an amicus brief in an attempt to block the effort to unseal and examine the ballots. a Republican who has resisted demands by former President Donald Trump and others to investigate claims of vote-counting mischief in the state's 2020 presidential vote,
-
-
-
-
In his brief, Raffensperger cites Georgia's new election security bill, signed into law by Republican Governor Brian Kemp on March 25, as allowing the "public disclosure of ballot images, but not ballots," meaning the auditors would have access to digital images of the ballots, created by the tabulation machines, but not the physical ballots themselves.

"In creating this limited exception, the General Assembly expressed its clear intent to only allow public disclosure of ballot images while maintaining the confidentiality of ballots from public," asserts the secretary of state's brief.......Much More 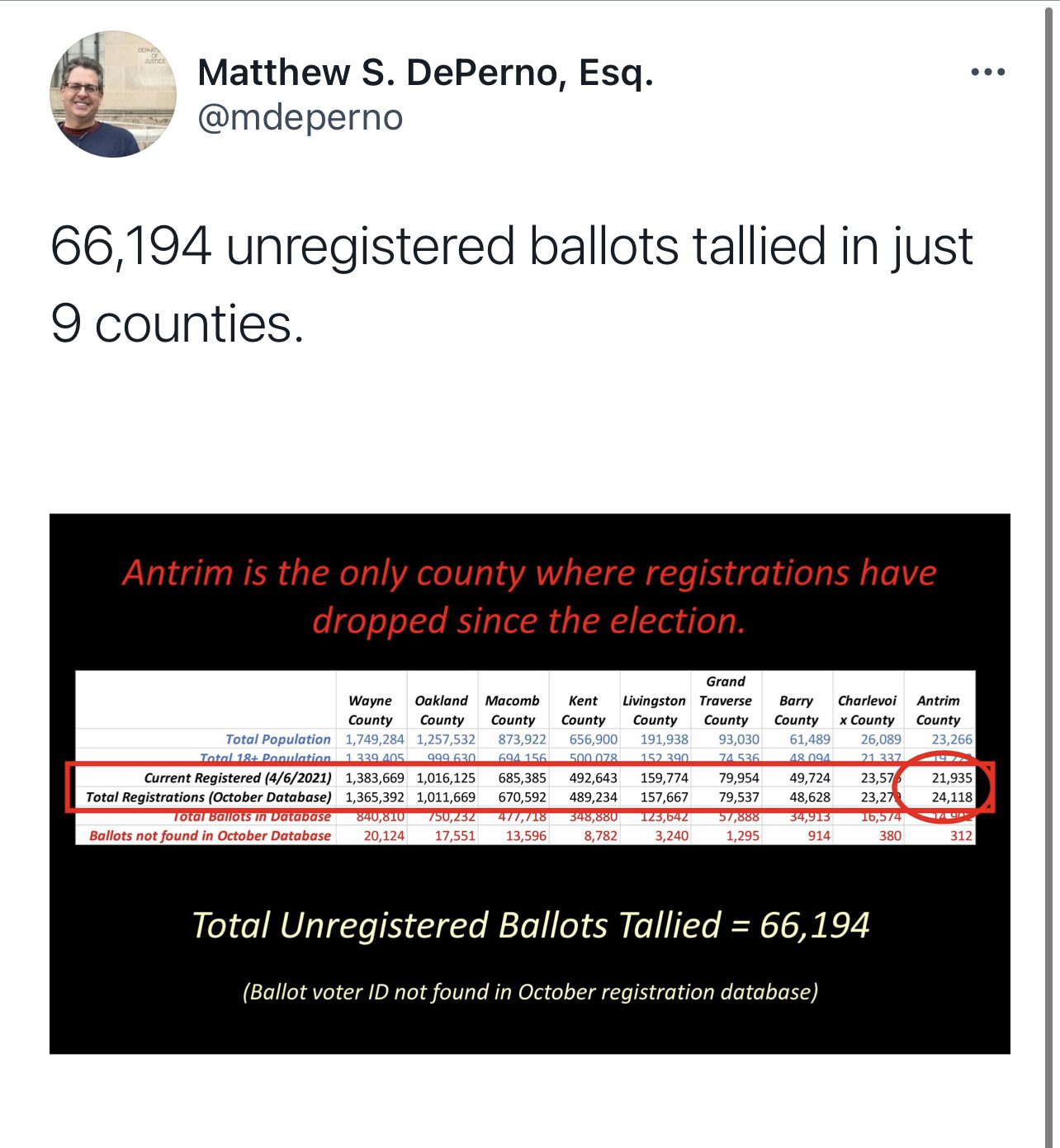 For months the companies behind the computer voting systems claimed their computers did not have internet access.

In his report that was filed in Michigan court, DePerno revealed that the ES&S DS200 voting machines contain a Telit LE910-SV1 Modem Chip installed on its motherboard.

The instructions, obtained by Just the News through a Freedom of Information Act (FOIA) request, were crystal clear concerning signature matching and ballot dating: Verification of signatures on absentee ballots was mandatory, and ballots were to be stamped with the date on which they are received.

Detroit election worker Jessy Jacob, a longtime city employee, testified in November that she was instructed by supervisors to ignore signatures on absentee ballots and to fraudulently backdate late-arriving absentee ballots to make them appear to be valid.

Yep, but the conjecture is now being proved true

A big dig at Trump during the election cycle proves false

From #3 in the GOP to censured in her home state with less than 15% support in her upcoming election, this will be the final nail in the coffin IMO

As the story of Russian bounties on U.S. troops gained traction in the press, Liz Cheney seized the opportunity to undermine her own party.

“The United States intelligence community assesses with low to moderate confidence that Russian intelligence officers sought to encourage Taliban attacks on U.S. and coalition personnel in Afghanistan in 2019 and perhaps earlier,” a senior administration official said, according to the readout of a call with reporters in the Daily Beast.

Officials said their conclusion of “low to moderate confidence” in the story, which effectively means it’s at best unproven and potentially false, came “in part because it relies on detainee reporting,” an often unreliable source of intelligence on which to base such explosive claims.

As the story picked up traction in the corporate press, however, Cheney appeared to sense a prime opportunity to capitalize on what was treated as a scandal, to not only undermine Trump, but also justify a prolonged military presence in the region while the administration took steps to pull out. Neither to Cheney, nor legacy media, appeared to hesitate due to the claims’ poor sourcing.

The viral public post below generated a series of news stories in major publications including Axios and The Hill, and was cited in dozens of others while catching airtime on national networks as an admonishment to the president of her own party......More

Author in Chief21 hours ago
Reactions: bob the dog

President Biden became the first Democratic presidential nominee in decades to secure a victory in the county.

Maybe the watermark rumor was true for the '20 elections, definitely looking for something under the Black light

Judicial Watch announced today that it received 540 pages and a supplemental four pages of documents from the office of the Secretary of State of California revealing how state officials pressured social media companies (Twitter, Facebook, Google, and YouTube) to censor posts regarding the 2020 election.

Included in the treasure trove of documents were “misinformation briefings” emails that were compiled by communications firm SKDK, that lists Biden for President as their top client of 2020.

The records were obtained in response to Judicial Watch’s open records request. Judicial Watch filed the requests after a December 2020 report surfaced that the a California state agency was surveilling, tracking, and seeking to censor the speech of Americans.

The December report showed that the California Office of Election Cybersecurity in the California Secretary of State’s office monitored and tracked social media posts, decided if they were misinformation, stored the posts in an internal database coded by threat level, and on 31 different occasions requested posts be removed. The report also reveled that that in 24 cases, the social media companies agreed and either took down the posts or flagged them as misinformation, according to Jenna Dresner, senior public information officer for the Office of Election Cybersecurity.

Responding to the December report, Dresner said, “We don’t take down posts, that is not our role to play,” She continued, “We alert potential sources of misinformation to the social media companies and we let them make that call based on community standards they created.”

The documents also include a 30-page “Misinformation Tracking Sheet” which lists social media posts that the office disagrees with and asked the social media companies to remove.

Documents also show emails from California Secretary of State’s Office, Facebook and Twitter from April of 2020. In the emails, the secretary’s office asks the social media companies to remove tweets and posts the government labeled “misinformation.”

Great news—Twitter is now on-boarding states into their mis/disinformation partner support portal! Once on-boarded, you will be able to directly report mis/disinformation instead of having to submit it to me first….” [Emphasis in original]
Click to expand...

Benson also gives contact information for Facebook and Google complaints, and says: “If any of the items you reported do not get prompt attention, please let me know and I can also reach out the companies.”

“These new documents suggest a conspiracy against the First Amendment rights of Americans by the California Secretary of State, the Biden campaign operation, and Big Tech,” said Judicial Watch President Tom Fitton.

“These documents blow up the big lie that Big Tech censorship is ‘private’ – as the documents show collusion between a whole group of government officials in multiple states to suppress speech about election controversies.”

The actual amount of people who voted for Biden.. 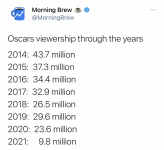 Interesting why are election routers a concern they should be clean since there shouldn't be any connected to election machines and the internet. Election board is still fighting the audit

Surrendering the materials could "put the lives of law enforcement personnel at risk."
Reactions: Danbones

Interesting stats for a bigot and racist


https://twitter.com/i/web/status/1391774948478398464
If Trump's numbers went up in these categories where did the actual numbers come from that voted Biden?
Reactions: Danbones
You must log in or register to reply here.
Top Bottom