The Origin of the Wuhan Coronavirus

Article content
A House of Commons order to produce the documents was terminated, along with all other business before the House, when Parliament was dissolved Sunday for an election.

Trackerdslogo
Consequently, a Justice Department official says no purpose would be served in continuing the government’s application to the Federal Court to block the release of the documents which it maintained would be injurious to national security.

The government has served the Federal Court with a notice of discontinuance in the case.

The decision leaves unresolved the question of whether the House of Commons is supreme and has unfettered power to demand the production of any documents it sees fit, no matter how sensitive and regardless of privacy or national security laws.

Opposition parties joined forces to demand the documents in hopes that they’d shed light on why scientists Xiangguo Qiu and her husband, Keding Cheng, were escorted out of Winnipeg’s National Microbiology Laboratory in July 2019 and subsequently fired last January.

The sun seems to have replaced the National enquirer tabloid
Reactions: taxslave

its to let people know that the article continues after the ads.

DaSleeper said:
The sun seems to have replaced the National enquirer tabloid
Click to expand...

never claimed that it was a great source.

It's the only one you ever quote!

Article content
U.S. officials said only China can help solve questions about the true origins of the virus that has now killed 4.6 million people worldwide. “China’s cooperation most likely would be needed to reach a conclusive assessment of the origins of COVID-19,” they said.


President Joe Biden, who received a classified report earlier this week summarizing the investigation he had ordered, said Washington and its allies will continue to press the Chinese government for answers.

“Critical information about the origins of this pandemic exists in the People’s Republic of China, yet from the beginning, government officials in China have worked to prevent international investigators and members of the global public health community from accessing it,” Biden said in a statement after the summary was released.

Article content
The summary, released by the Office of the Director of National Intelligence, was set to worsen discord between Beijing and Washington at a time when the countries’ ties are at their lowest point in decades. In the United States, activists worried the investigation could also encourage violence against Asian Americans.

Reuters earlier reported that administration officials did not expect the analysis to settle debate about the virus’ origin.

China has ridiculed a theory that COVID-19 escaped from the state virology lab in Wuhan and pushed fringe theories including that the virus slipped out of a lab in Fort Detrick, Maryland, in 2019.

The U.S. report revealed new detail about the extent of the disagreement within the Biden administration over the so-called lab leak theory.

Article content
Several organizations within the sprawling U.S. intelligence community thought the novel coronavirus emerged from “natural exposure to an animal infected with it or a close progenitor virus,” according to the summary.

But they had only “low confidence” in that conclusion, the summary said. Other groups were not able to come to any firm opinion at all on the origins.

One intelligence community segment, however, developed “moderate confidence” that the first human infection with COVID was likely due to a “laboratory-associated incident, probably involving experimentation, animal handling, or sampling by the Wuhan Institute of Virology” in China.


A team led by the World Health Organization (WHO) that spent four weeks in and around Wuhan in January and February dismissed that theory. But their March report, which was written jointly with Chinese scientists, has been faulted for using insufficient evidence to dismiss the theory.

Article content
The new U.S. report concluded that analysts would not be able to provide “a more definitive explanation” without new information from China, such as clinical samples and epidemiological data about the earliest cases.

Initially, U.S. spy agencies strongly favoured the explanation that the virus originated in nature. But people familiar with intelligence reporting have said there has been little corroboration over recent months that the virus had spread widely and naturally among wild animals.

“While this review has concluded, our efforts to understand the origins of this pandemic will not rest,” Biden said. “We will do everything we can to trace the roots of this outbreak that has caused so much pain and death around the world, so that we can take every necessary precaution to prevent it from happening again.”

The World Health Organization’s director-general, Tedros Adhanom Ghebreyesus, has said the group has not ruled out any hypothesis. The Geneva-based organization is set to impanel a new committee to develop next steps on studying the virus SARS-CoV-2.

But epidemiological experts said the window was closing for any useful data to be collected, particularly from people infected by the disease in 2019, when the virus likely first emerged.

WASHINGTON — The U.S. intelligence community does not believe it can resolve a debate over whether a Chinese laboratory incident was the source of COVID-19…

REVEALED: 26 out of the 27 Lancet scientists who trashed theory that Covid leaked from a Chinese lab have links to Wuhan researchers​

By CHRIS JEWERS FOR MAILONLINE

Interesting twist after being outed as paid Chinese operatives

By GLEN OWEN and STEPHEN ADAMS FOR THE MAIL ON SUNDAY

Article content
Two samples from horseshoe bats were collected in 2010 in Stung Treng province near Laos and kept in freezers at the Institut Pasteur du Cambodge (IPC) in Phnom Penh.


Tests done on them last year revealed a close relative to the coronavirus that has killed more than 4.6 million people worldwide.

An eight-member IPC research team has been collecting samples from bats and logging their species, sex, age and other details for a week. Similar research is going on in the Philippines.

“We hope that the result from this study can help the world to have a better understanding about COVID-19,” field coordinator Thavry Hoem told Reuters, as she held a net to catch bats.

Host species such as bats typically display no symptoms of pathogens, but these can be devastating if transmitted to humans or other animals.

Dr. Veasna Duong, Head of Virology at the IPC, said his institute had made four such trips in the past two years, hoping for clues about the origin and evolution of the bat-borne virus.

“We want to find out whether the virus is still there and … to know how the virus has evolved,” he told Reuters.

But Veasna Duong said humans were responsible for the devastation caused by COVID-19, due to interference and destruction of natural habitats.

“If we try to be near wildlife, the chances of getting the virus carried by wildlife are more than normal. The chances of the virus transforming to infect humans are also more,” he said.

The French-funded project also aims to look at how the wildlife trade could be playing a part, said Julia Guillebaud, a research engineer at the IPC’s virology unit.

“(The project) aims to provide new knowledge on wild meat trade chains in Cambodia, document the diversity of betacoronaviruses circulating through these chains, and develop a flexible and integrated early-detection system of viral spill-over events,” Gillebaud said. 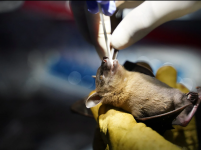 Cambodia bat researchers on mission to track origin of COVID-19

STUNG TRENG — Researchers are collecting samples from bats in northern Cambodia in a bid to understand the coronavirus pandemic, returning to a region where a…

By CHARLIE COË and LEVI PARSONS FOR DAILY MAIL AUSTRALIA

Why am I not surprised.
Reactions: Twin_Moose

Article content
A new book about the pandemic, however, insists the coronavirus was leaked from a Wuhan research lab and the country is covering it up.


The first case of the novel coronavirus was reported in Wuhan in December 2019, believed to be originated at the Huanan Seafood Wholesale Market.

Author and investigative journalist Sharri Markson says there is evidence the virus was leaked, reported the Mirror.

Her new book, What Really Happened in Wuhan, explores the theory that the outbreak accidentally came from the Wuhan Institute of Virology, which China has always maintained is untrue.

David Stilwell, an American former diplomat in East Asia, told Markson that China’s repeated assertion the virus had natural origins is “the cover-up of the century” before adding, “This makes Watergate look easy.”

Markson backed up her leak beliefs with key evidence that points to an “unusual” military exercise that reportedly took place at Wuhan airport before the October 2019 Military World Games.

According to the Mirror, Chinese media reported a practice drill that simulated the responses to a new coronavirus was carried out.

Those who were infected for that exercise “now appear difficult to track down.”

Then there’s Huang Yanling, the Wuhan lab worker who allegedly vanished in January 2020, which only fuels her speculation fire.


And it doesn’t help that China has rejected plans for further investigation into the virus’ origins.

But while Markson could be bang on, former MI6 chief Sir Richard Dearlove does not believe the leak was intentional.

“If you look at the evidence coldly, the likelihood is this is an escape from a laboratory, and it’s up to the Chinese to demonstrate conclusively to us that it isn’t, not just to tell us,” he told Markson.

“I’m not saying they deliberately released it, I’m saying this is a Chinese accident but there was a cover-up from day one.” Covid 'leaked' from Wuhan lab in cover up worse than Watergate', book claims

'What Really Happened in Wuhan', a new book on the pandemic, questions the idea that coronavirus had natural origins while suggesting a leak from China's Wuhan Institute of Virology was "covered up"

It’s widely believed COVID-19 may have leaked from a Wuhan lab, despite China's vehement denials.

Sure don’t know where to find the Toronto Sun , glad Spamminator posts it everyday .

pgs said:
Sure don’t know where to find the Toronto Sun , glad Spamminator posts it everyday .
Click to expand...

But after 6 in a roll with no response shows no one is interested in the topic at hand .

pgs said:
But after 6 in a roll with no response shows no one is interested in the topic at hand .
Click to expand...

perhaps some threads should be automatically locked and or deleted if they become too old and or not enough activity.

Ugh… The site is intelligently designed in such a way that threads can go back for years and there could be an archive of thousands and thousands of them….

The active ones come to the top and Less active once fade to the back….& if you look hard you can find threads going back years and years if you search for them. Who knows what google search will bring someone new to explore the rants & raves from over the years….

There’s is not a problem with the site but just sour grapes in general at times. Nobody forces anyone to read anything…
Reactions: Twin_Moose
You must log in or register to reply here.
Top Bottom