For everyone who voted PPC thanks for re-electing Trudeau

For everyone who voted PPC thanks for re-electing Trudeau​ 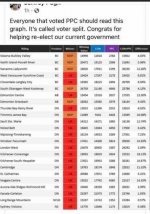 For everyone who voted PPC thanks for re-electing Trudeau​

Yeah, that's right. Don't blame the utter morons who were brain dead enough to vote for Groper THREE times now. Only a complete fucking idiot, or a partisan shit pump (same thing really) could look at the last six years and say, "Ooooo gimmie more of that".
Reactions: taxslave and Dixie Cup

Jinentonix said:
Yeah, that's right. Don't blame the utter morons who were brain dead enough to vote for Groper THREE times now. Only a complete fucking idiot, or a partisan shit pump (same thing really) could look at the last six years and say, "Ooooo gimmie more of that".
Click to expand...

AMEN!! God forbid that someone's choice affects yours. Hopefully, the PPC will do better as it evolves as a Party. Starting a new Party isn't easy so it'll take time. People just need to realize that the hyperbole that the PPC is "extremist" is simply wrong. They don't advocate violence, or rioting etc. They're advocating FOR Canada and Canadians and common sense.

As long as they continue with the types of policies that will actually help Canadians and not bow down to some foreign conglomerate or the UN, I think they'll eventually get to where they'll be a Party to contend with but they have to start somewhere. Unfortunately, common sense is decried in this and other countries but Leftist policies that drain the economies of countries and make people poorer are strong and are able to "de-platform" Parties like the PPC so it's even more difficult to get the public attention. Patience is the key!
Reactions: Serryah

You can’t win on a hard right platform there’s way to many centrist and left leaning Canadians, you just witnessed what happens to harder right 5%
Reactions: Serryah and taxslave

B00Mer said:
You can’t win on a hard right platform there’s way to many centrist and left leaning Canadians, you just witnessed what happens to harder right 5%
Click to expand...

Federally, no. But if you're the CAQ you get elected for pushing right-wing extremist views. And things like re-working Canada's criminally irresponsible immigration policy isn't "hard-right". Unless common fucking sense is a hard-right trait now. OH that's right it is. According to the ALT-leftards things like objectivity are now "racist" traits.
Reactions: taxslave 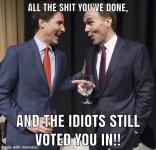 Reactions: taxslave, IdRatherBeSkiing, Ron in Regina and 1 other person

Article content
In a tweet Wednesday, Bernier called three journalists from mainstream news outlets “idiots” and listed their emails, writing: “They want to play dirty, we will play dirty too.”


He encouraged his 160,000 followers to contact the reporters, posting excerpts of their requests for comment after Monday’s federal election.

“(T)ell them what you think of their disgusting smear jobs,” Bernier wrote.

The journalists from CTV News, Global News and the Hill Times had asked about the People’s Party’s endorsement by white nationalist groups, fears among racialized Canadians about what the party represents and whether it tolerates potential acts of hate by supporters on the campaign trail.


Hill Times reporter Neil Moss told The Canadian Press he experienced an uptick in harassment in the form of emails.

The People’s Party did not respond to a request for comment from The Canadian Press.

The Canadian Association of Journalists said journalists have a legal and ethical obligation to send questions to politicians and that going after reporters for doing their job is “unacceptable and dangerous.”

“Mr. Bernier’s effort to harass journalists, to sic his followers on journalists for basically just doing their job and asking questions and holding them to account, it is absolutely deplorable,” he said in an interview.

Jolly compared Bernier’s tack to some Republicans’ efforts at “demonizing the press.”

“He’s channelling, it seems, a lot of the same behaviours that we see from American politicians and their relationships with the media,” he said. “This is what we’ve seen with Donald Trump and other right-wing politicians.”

Article content
Founded by Bernier in 2018 after he narrowly lost the Conservative leadership race to Andrew Scheer, the People’s Party of Canada occupies turf to the right of the Tories, advocating drastically reduced immigration levels, withdrawal from the Paris climate accord and opposition to COVID-19 restrictions and vaccine passports.

During the election campaign, some protesters against vaccination measures touted PPC signs. The party booted one of its Ontario riding association presidents after allegations surfaced he threw gravel at Prime Minister Justin Trudeau at a whistle stop in London, Ont.

Police later charged Shane Marshall in the incident. The suspect shared the name of the former PPC riding association president, but the party did not confirm he was the same person.

The former Tory cabinet minister, who self-identifies as a “limited-government conservative,” drew boisterous crowds over the past month as he campaigned against vaccine mandates and pandemic lockdowns amid a surging fourth wave.

The CBC said in a release that reporters’ work is vital to an informed public and a healthy democracy, and that online harassment of journalists puts their safety at risk.

“When the incitement to harass journalists comes from public figures, it is even worse,” Canada’s public broadcaster said Thursday.

“That the worst of this abuse targets women and racialized journalists should make clear just how dangerous this is.”

The Crown corporation said it will join with other public broadcasters from across the globe next week in a commitment to take joint action against the problem.

You assume every PPC voter was previously a Conservative voter and we're finding that is not the case.
Reactions: taxslave and Ron in Regina

I think PPC has a certain appeal to libertarians on both sides. Or they are using it as a protest vote as we once did with Reform since there is still no real difference between liberal and conservative parties other than conservatives understand fiscal responsibility.

taxslave said:
I think PPC has a certain appeal to libertarians on both sides. Or they are using it as a protest vote as we once did with Reform since there is still no real difference between liberal and conservative parties other than conservatives understand fiscal responsibility.
Click to expand...

I think PPC is a protest ‘Flash in the Pan’ like ‘Idle No More’ or ‘Black Lives Matter’ in reaction to current divisiveness that will quickly fade away, but maybe this ‘Maverick Party’ that’s still young might become something in a few more election cycles like ‘Reform’ did but it’s too soon to tell….but I can see the parallels.
Reactions: taxslave

I know that Saskatchewan is its own microcosm in the heart of the prairies, but the results are interesting relating to what I’m trying to state above. PPC is going to diffuse like a fart in a large room, but this young Maverick Party (?) might grow into a ‘something’ given time & direction. Here’s what we saw out here & the %’ages are interesting:

Probably right. PPC is another eastern based party, so I don't expect too much traction in the West. Also too far from the center, where the deciding votes are to make many inroads. As turdOWE keeps making life difficult in the west I can see Maverick doing better on the prairies. Probably not in BC where we have an overload of extreme left and quite a few far left.Lots are imports from OntariOWE and bring their bad politics with them. For some reason I don't understand the farther left the more they like government control of their lives and money.
Reactions: Ron in Regina

Also to far from the center . Well there you are in a nutshell . The center is occupied by liberals .
You must log in or register to reply here.
Top Bottom