'Zack Snyder's Justice League' review: The director's cut is truly a new film -- and a knockout

It’s no wonder that in the years since Hollywood got eaten alive by comic-book culture, the superhero movies that have achieved a genuine sweeping transcendence can just about be counted on one hand: “The Dark Knight,” “Spider-Man 2,” “Black Panther,” a few others.


To that hallowed list I would now add “Zack Snyder’s Justice League,” the thrillingly restored four-hour-long director’s-cut version of the 2017 DC Comics extravaganza. The new movie — and make no mistake, it really is a new movie — is , a team-of-heroes origin story that, at heart, is classically conventional, yet it’s now told with such an intoxicating childlike sincerity and ominous fairy-tale wonder that it takes you back to what comic books, at their best, have always sought to do: make you feel like you’re seeing gods at play on Earth.

This advertisement has not loaded yet, but your article continues below.
Article content
It was online fans who first dubbed this project “the Snyder cut.” In March 2017, Snyder, after creative conflicts with the studio (and the suicide of his daughter), walked away from the film and saw it handed over to Joss Whedon, who rewrote and reshot more than half of it.

In the minds of the Warner Bros. executives, still reeling from the bumpy launch of their DC multiverse, Snyder’s version was too long and too dark. Whedon chopped out the backstory, and a fair amount of the front story, swapping in jokes and glib patter and a kind of brightly lit gee-whiz aura. In other words, he churned out a hastily shot “audience friendly” version of “Justice League,” synced to the processed beats of corporate storytelling, that wound up pleasing next to no one.


Timing, they say, is everything, and there are two ways that the new “Justice League” turns out to be karmically well-timed.

It’s premiering a year into the pandemic, which means that audiences have now gone for 12 months without experiencing the primal joys of high-flying fantasy escapism on the big screen.

We’re starved for it, and though it’s true that “Justice League” will be seen, by and large, on HBO Max, the film is such a feast of bravura eye candy and emotionally serious spectacle that it seems to be delivering all the excitement we’ve been missing. As someone who has never been shy about dissing the global obsession with comic-book cinema, I found that the film totally tapped my inner fanboy. The four hours of it glide by in an addictive trance.

This advertisement has not loaded yet, but your article continues below.
Article content
But the other way the experience of “Justice League” is shaped by timing is that now that Snyder has restored the film to its pop operatic grandeur, it strikingly echoes the sinister extravagance of the “Avengers” saga, notably the last two installments of it, which hadn’t come out when the bowdlerized, trimmed-to-the-bone “Justice League” appeared in 2017.

“Justice League” accomplishes in four hours what those films did in nine. It unites a team of superheroes, but never forgets that each of them is seriously worthy of his or her own story. It pits them against a humungous slab of rock-jawed evil — in this case the molten Darkseid (who got trimmed out of the 2017 version) and his loyal demon henchman Steppenwolf — who seeks to control all life in the universe. And it’s finally a startling tale of death and resurrection

The five members of Justice League, gathered up by Batman and Wonder Woman, realize that they can’t save Earth without Superman, who is no longer with them. So they use one of the three Mother Boxes, the sources of infinite energy everyone is fighting to possess, to raise Clark Kent from the dead — a plot twist that was there in the 2017 version, but that’s the thing, it was just…there. Here, the hard-won reawakening of Superman becomes a transporting saga of its own.

The new “Justice League” exudes a majestic sense of cosmic historical evil. Its tone is less reminiscent of other DC or Marvel movies than of Peter Jackson’s “Lord of the Rings” trilogy.

This advertisement has not loaded yet, but your article continues below.
Article content
The camaraderie among the superheroes is vastly deepened — with the cheeseball wisecracks excised, they develop a moving affinity for each other. In one of many examples of how sharpened Snyder’s filmmaking is, Ezra Miller’s Flash is introduced with far wittier dialogue than anything Joss Whedon came up with, followed by a mesmerizing bullet-time sequence in which he saves a young woman from a car accident — an episode that beautifully sets up the hidden empathy of his speed-of-light character.

Gal Gadot’s Diana has the stalwart but tensely trepidatious presence that got fumbled in “Wonder Woman 1984,” Ray Fisher’s Cyborg has acquired the resonance of a half-machine Hamlet, and Ben Affleck’s Batman is like a different character: With all that Ben-friendly banter gone, he embraces the gruff-voiced, dread-tinged, sinister Bruce with sterling command.


Beyond that, this has to be one of the most visually spellbinding comic-book movies ever made. The clashing battles never give you that weary, here’s-some-more-CGI feeling, because they’ve been staged with a supreme conviction that’s more “Seven Samurai” than super invincible. Ciaran Hinds’ Steppenwolf, with his horns of evil, is still the prime antagonist, but while he seemed a trifle effete in the 2017 version, here he has been reimagined as a splendid hulk covered in gleaming herringbone platelets that bristle with his emotion, and he’s also a disgraced assassin who will stoop to the unspeakable.

“Justice League” ends with what may be the best post-comic-book-movie teaser ever, as Jesse Eisenberg’s Lex Luthor and then Jared Leto’s Joker hold court in twin lectures of doom that make you hungry to see the movies they promise. It’s not just that these characters are back. So is the thing that too many comic-book films have destroyed: the sensation that something’s at stake.

'Zack Snyder's Justice League' review: The director's cut is truly a new film -- and a knockout

Zack Snyder's Justice League is such a feast of eye candy and serious spectacle that it delivers all the excitement we've been missing.

I’m looking forward to that one, l have the HBO add-on with my Crave account and it’s apparently coming on there on Thursday. A four hour commitment I’ve heard.

Are you excited to see Zack Snyder’s Justice League?

Zack Snyder on the most important addition to his four-hour director's cut of Justice League, the return of Jared Leto's Joker and more.

Well I'm sure if someone had four damn hours to flesh out their plot/story and characters, there's a good chance it would be better than the hacked up version that ended up in the theatres that had to adhere to those type of time limits.

The Godfather and Lord of the Rings movies all float around the 3 hour mark & we're already long as hell.

Four hours is like watching two movies back to back.... Maybe three.

I watched Justice League when it was in the theatres. It wasn't terrible, but it wasn't great either. I'm sure this version would be somehow better, but I'm not going to sit and watch it again for four hours. Any improvements to the story/plot/characters would be cancelled out by me being burnt out after 2 hours of slogging through this Bible of a Movie.

I'll pass. First impressions and all that.

Snyder and his wife Deborah, a producer, left the original film before it was finished following the death of their daughter. The movie was completed by “Avengers” director Joss Whedon and fell flat with critics and fans who thought the storytelling was disjointed and the visual effects messy.

Fans began lobbying for WarnerMedia to release Snyder’s version of the film. They even bought a billboard in New York’s Times Square in October 2019 to promote their cause.

This advertisement has not loaded yet, but your article continues below.
Article content
In an unusual move, the company agreed and let Snyder rework a black-and-white version that he had completed in 2017.

The new movie goes into greater detail about many characters, which include Superman, Batman, Wonder Woman, The Flash, Aquaman and Cyborg, and explains the motives of their enemy, Steppenwolf. Stars include Ben Affleck as Batman, Henry Cavill as Superman and Gal Gadot as Wonder Woman.


Critics have generally applauded Snyder’s version. The film scored a 77% positive rating on Rotten Tomatoes, a website that aggregates reviews, as of Tuesday, compared with 40% for the 2017 movie.

The new film runs four hours and is divided into chapters of around 30 minutes each to give options for viewers watching at home, Deborah Snyder said. 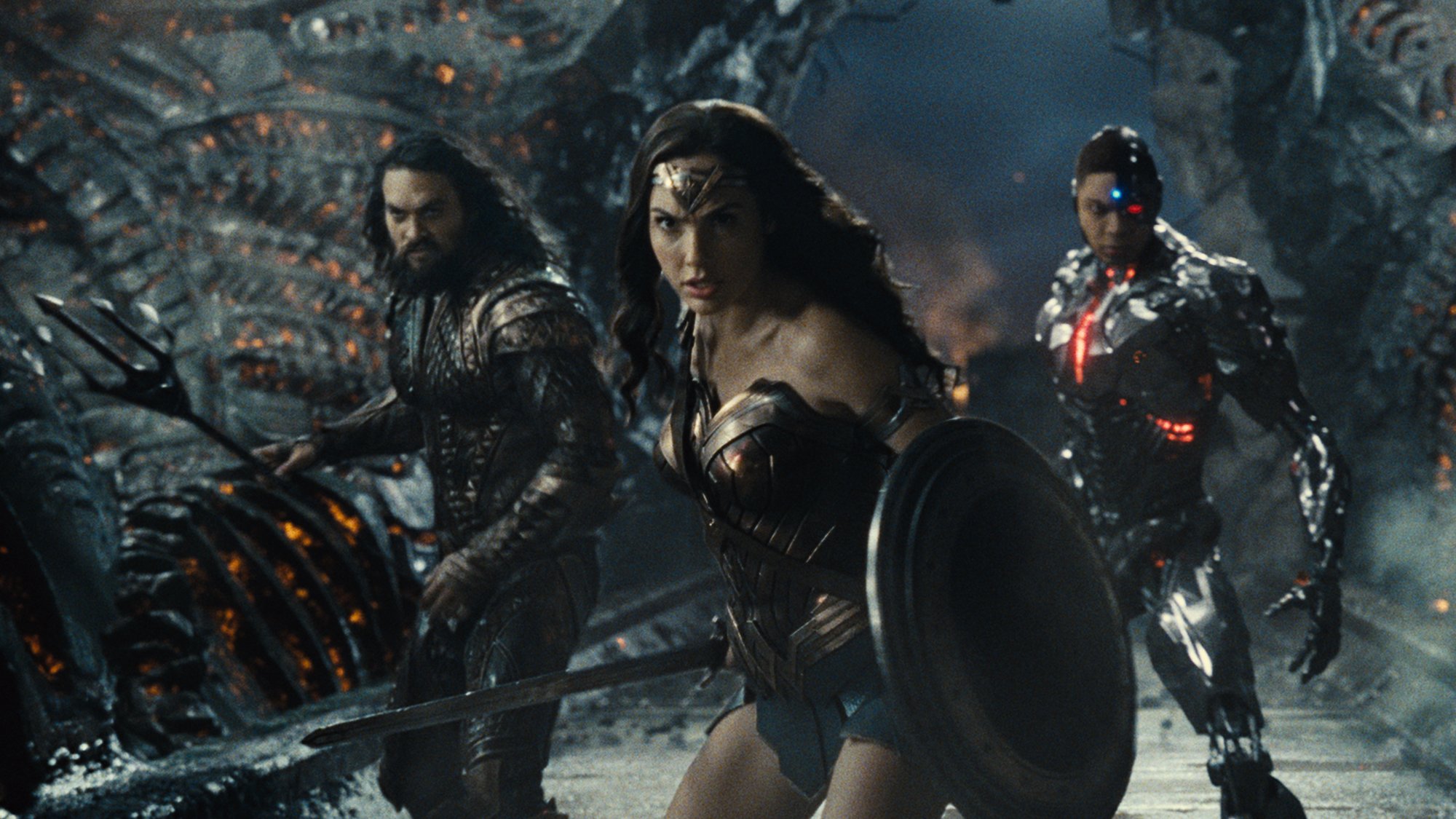 Batman, Wonder Woman, Aquaman, Cyborg, and The Flash unite to stop Steppenwolf, DeSaad, and Darkseid and their dreadful intentions.

Zack Snyder's Justice League gives DC fans the film they wanted: 'This is a love letter'

Zack Snyder says getting a chance to finish Justice League the way he always wanted to was full of "cathartic moments."