Gino's Pizza worker fired over gay slur
Jenny Yuen
More from Jenny Yuen
Published:
February 18, 2020
Updated:
February 18, 2020 4:29 PM EST
Pepperoni pizza.POSTMEDIA
A local pizza joint is under fire after an employee allegedly refused service to a gay customer.
Jeremy Mizu filmed a video of an argument he had with the Gino’s Pizza employee in the Yonge St.-Eglinton Ave. area location Friday night.
“Last night I was called a f—– and told to leave store because I opened the door and it was cold,” tweeted Mizu.
Last night I was called a faggot and told to leave store because I opened the door and it was cold. This is the worker after the manager had been standing up for him. Here he is calling me a faggot and smirking. http://t.co/PJlns46rZK
— Jeremy Mizu (@MizuJeremy) February 15, 2020
In the 16-second video, Mizu is heard saying to a man wearing a red and white Gino’s Pizza shirt, “I can film you. I’m allowed.”
“You are?” responds the worker. “Because you are a f—–?”
The video has been watched more than 27,000 times.
The caption in the tweet — also shared by LGBTQ rights advocate Rob Gill — states Mizu was denied service “for being gay and was called a f—–.”
Toronto man Jeremy Mizu was denied service at @GinosPizzaCDN (Yonge & Eg in Toronto) for being gay and was called a “faggot”.
This. Is. NOT. Okay. #LGBTQtwitter #HateSpeech #cdnpoli #onpoli @JohnTory @kristynwongtam pic.twitter.com/hIzGM5ZrVT
— Rob Gill (@vote4robgill) February 15, 2020
I opened the door once. The Irish girls were with me and were telling the manager how it’s unacceptable and we want a refund. They did not give us said refund. But either way to call me a faggot several times for opening the door? Still unacceptable. http://t.co/m2V31BNxqW
— Jeremy Mizu (@MizuJeremy) February 15, 2020
Gino’s Pizza replied on Twitter, thanking people for bringing the incident to their attention and confirmed the employee has been fired.
“Gino’s Pizza management has been investigating this issue. This was clearly a violation of our staff conduct policies and code of ethics that all our employees must adhere to,” the company wrote in a statement.
Thank you all for bringing this to our attention. We’re taking this matter very seriously. The employee involved has been terminated. pic.twitter.com/6BtSs1JEC9
— Gino's Pizza (@GinosPizzaCDN) February 15, 2020
“We take this matter extremely seriously and as a result, the employee involved has been terminated. Gino’s Pizza is a supporter of the LGBTQ community and apologizes for the actions of this former employee.”
jyuen@postmedia.com
http://torontosun.com/news/local-news/watch-ginos-pizza-worker-fired-over-gay-slur

According to the New York Post, a fight erupted between two customers of a Little Caesars when 25-year-old Brittany Kennedy allegedly got in the face of Emily Broadwater, 22, and yanked the chair from under her, officials from the Richmond County Sheriff’s Office noted.


Much like everything in today’s digital world, the alleged smackdown was captured on video.

In the viral 41-second video filmed by a bystander, screaming can be heard as Broadwater is seen being beaten by Kennedy repeatedly as she’s grabbed by the hair.

During the melee, a toddler can be seen joining in on the fight, as someone shouts “move the baby” repeatedly. The young girl is eventually pulled to safety.

Broadwater tries to mount a comeback but fails as Kennedy fights back and punches her opponent about two dozen times, creating a crimson mask in the process. Kennedy then can be seen dragging Broadwater out of the pizzeria by the hair before being thrown to the ground and getting a stomp to her head.


Broadwater screams “My baby!” as she picks herself off the ground with blood dripping from her nose. It’s not known what provoked the fight.

The Post reported that a wanted poster was issued for Kennedy, who is being sought on assault charges. Cops say Broadwater suffered a “severely swollen” and lacerated bottom lip from the brawl and the woman refused a hospital trip. 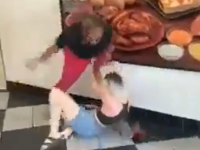 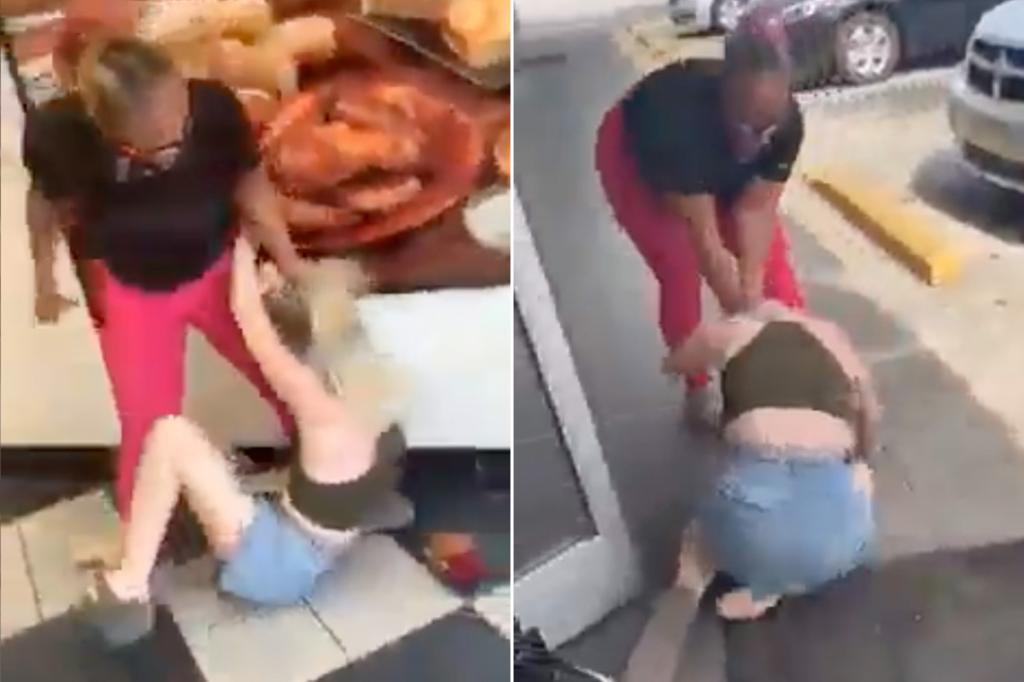 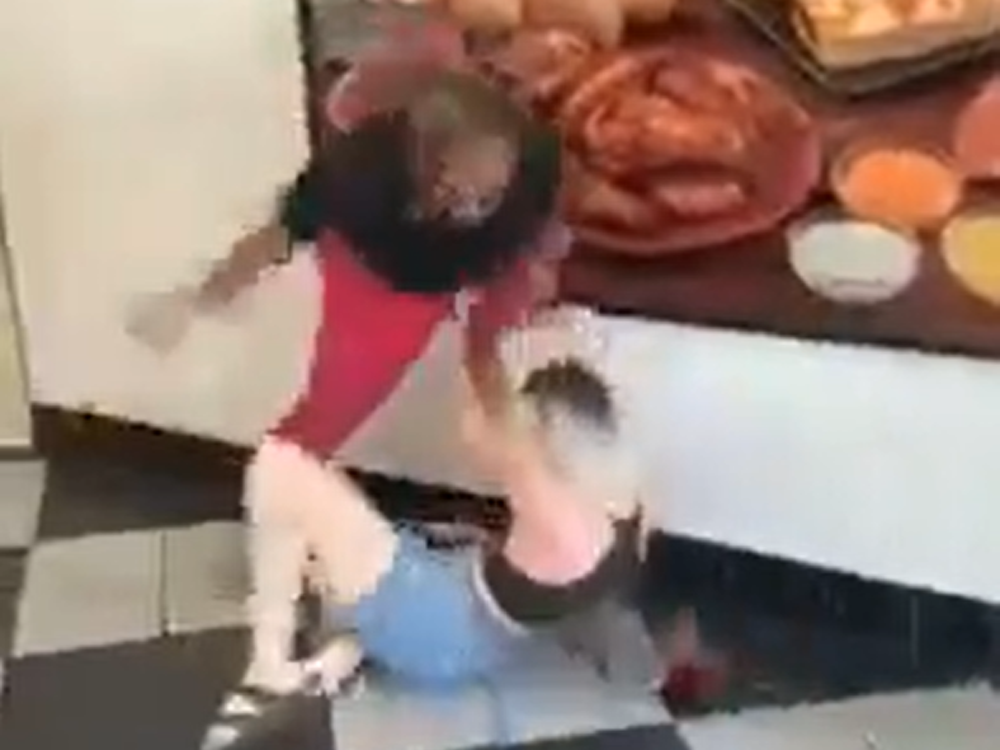 Things were hot-n-ready inside an Augusta, Ga., pizzeria Monday afternoon.