Never liked pizza that much

Would they sprinkle heavy metal onto said pizza if asked??

salt isn't the danger it has been made out to be

Pizza sounds good, but it has to be accompanied by a child for us to abuse while we enjoy the pizza.

It’s Not Delivery. It’s DiGiorno Pizza — all over the interstate 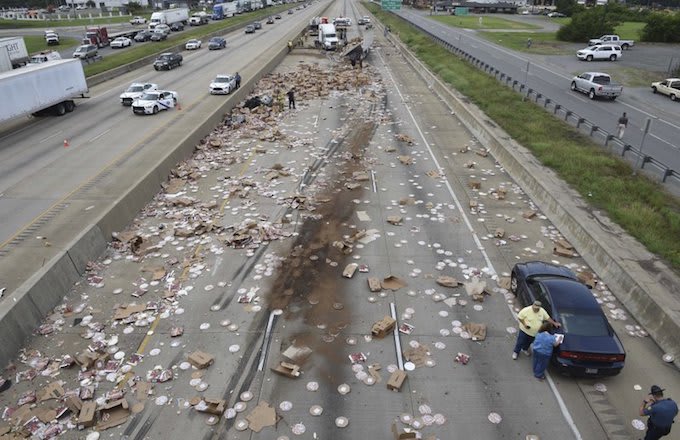 The sweet and savory hawaiian pizza is the best!!!
C

Johnnny said:
The sweet and savory hawaiian pizza is the best!!!
Click to expand...

I like my pizza with all the vegan toppings and no cheese.
C

White_Unifier said:
I like my pizza with all the vegan toppings and no cheese.
Click to expand...

Vegans are way too chewy and lean and they wreck a good pizza.

Curious Cdn said:
Vegans are way too chewy and lean and they wreck a good pizza.
Click to expand...

Cannibal is such an ugly word.

Let's just say that I love my fellow man ... and woman.

'Incoherent' suspect recalls driving into pizzeria: France
Alex Turnbull And John Leicester, THE ASSOCIATED PRESS
First posted: Tuesday, August 15, 2017 05:47 PM EDT | Updated: Tuesday, August 15, 2017 05:50 PM EDT
MEAUX, France — A security guard who deliberately rammed his car into a crowded pizzeria in France told investigators he was a suicidal habitual drug user and had consumed “a large quantity” of painkillers the day before the act that killed an adolescent girl, a prosecutor said Tuesday.
Eric de Valroger, a prosecutor in the town of Meaux east of Paris, described the suspect as “incoherent” and said his interrogation was proving “very complicated” and confusing.
The prosecutor reiterated that he had “totally” ruled out terrorism as a motive for the driver’s as-yet unexplained actions Monday night.
De Valroger said it remains unclear if the 32-year-old man intended to kill when he rammed his BMW into the restaurant that had about 30 people inside and on a terrace outside.
The prosecutor said the security guard simply described the restaurant in the village of Sept-Sorts as an easy, unprotected target.
The suspect — who faces aggravated murder and other charges — told investigators he had no beef with the pizzeria’s owner and that he didn’t know his victims, de Valroger said.
The driver showed signs of paranoia, “saying repeatedly that he felt as though as he was being followed, that the police were investigating him,” he said.
“He describes himself as being out of control at the time of the incident. He is very confused about the motives. He says that if he commits an act that sends him to prison, he will be safe,” the prosecutor said.
The driver was quickly arrested in what was the latest of several attacks in France and elsewhere using a vehicle as a weapon. De Valroger says the investigation promises to be long.
The prosecutor said the man had a 2010 conviction for drunken driving and told investigators he had abused drugs since he was 9 years old.
The driver also told investigators that he consumed large doses of mild painkillers on Sunday but gave conflicting explanations for why.
“He said initially that he aimed to kill himself, knowing full well that these medicines couldn’t end his life,” the prosecutor said. “He later eventually said that it was to help him sleep.”
Tests showed that the driver had consumed drugs but not alcohol before he accelerated into the restaurant, travelling so fast that the car lodged inside.
He tried reversing out, but several restaurant patrons blocked his path and tried to pull him from the BMW before police arrived, the prosecutor said.
Of the five people most seriously injured, a 44-year-old woman remains in danger, the prosecutor said. The others, including a 3-year-old boy who was flown by helicopter to a Paris children’s hospital, are out of immediate danger, he added.
Seven other people with lesser injuries remain hospitalized, he said.
The 3-year-old boy’s adolescent sister was the person killed. The prosecutor said the children’s father also was injured.
Leicester reported from Paris.
'Incoherent' suspect recalls driving into pizzeria: France | World | News | Toro

Delivery without drivers? Domino's Pizza testing self-driving pizza delivery vehicles
Dee-Ann Durbin, THE ASSOCIATED PRESS
First posted: Tuesday, August 29, 2017 10:56 AM EDT | Updated: Tuesday, August 29, 2017 11:03 AM EDT
ANN ARBOR, Mich. — No ring of the doorbell, just a text. No tip for the driver? No problem in this test, where Domino’s and Ford are teaming up to see if customers will warm to the idea of pizza delivered by driverless cars.
Starting Wednesday, some pizzas in Domino’s hometown of Ann Arbor will arrive in a Ford Fusion outfitted with radars and a camera that is used for autonomous testing. A Ford engineer will be at the wheel, but the front windows have been blacked out so customers won’t interact with the driver.
Instead, people will have to come out of their homes and type a four-digit code into a keypad mounted on the car. That will open the rear window and let customers retrieve their order from a heated compartment. The compartment can carry up to four pizzas and five sides, Domino’s Pizza Inc. says.
The experiment will help Domino’s understand how customers will interact with a self-driving car, says company President Russell Weiner. Will they want the car in their driveway or by the curb? Will they understand how to use the keypad? Will they come outside if it’s raining or snowing? Will they put their pizza boxes on top of the car and threaten to mess up its expensive cameras?
“The majority of our questions are about the last 50 feet of the delivery experience,” Weiner told reporters last week.
Domino’s, which delivers 1 billion pizzas worldwide each year, needs to stay ahead of emerging trends, Weiner says. The test will last six weeks, and the companies say they’ll decide afterward what to do next. Domino’s is also testing pizza delivery with drones.
Weiner said the company has 100,000 drivers in the U.S. In a driverless world, he said, he could see those employees taking on different roles within the company.
Ford Motor Co., which wants to develop a fully driverless vehicle by 2021, said it needs to understand the kinds of things companies would use that vehicle for. The experiment is a first for Ford. But other companies have seen the potential for food deliveries. Otto, a startup backed by Uber, delivered 50,000 cans of Budweiser beer from a self-driving truck in Colorado last fall.
“We’re developing a self-driving car not just for the sake of technology,” said Sherif Marakby, Ford’s vice-president of autonomous and electric vehicles. “There are so many practical things that we need to learn.”
Only one car will be deployed in Ann Arbor, and it has a special black-and-white paint job to identify it as a research vehicle.
Customers in the test area will be chosen randomly when they order a pizza, and will get a phone call to confirm they want to participate. If they agree, they’ll get a text message letting them know when the vehicle is pulling up and how to retrieve their food.
This Friday, Aug. 24, photo, shows the specially designed delivery car that Ford Motor Co. and Domino’s Pizza will use to test self-driving pizza deliveries, at Domino’s headquarters in Ann Arbor, Mich. (AP Photo/Dee-Ann Durbin) 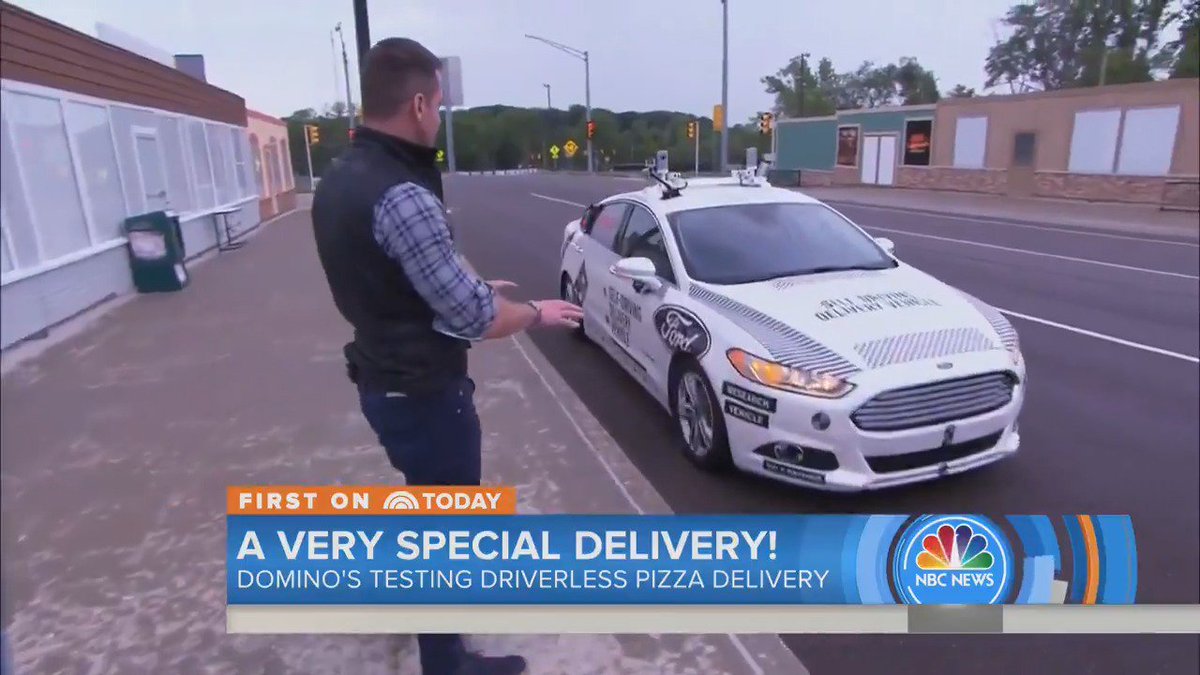 Fed up 'Breaking Bad' house owner erects fence to stop pizza tosses
Postmedia Network
First posted: Thursday, October 12, 2017 12:50 PM EDT | Updated: Thursday, October 12, 2017 01:02 PM EDT
A New Mexico woman who owns the famed Breaking Bad house is fed up with people tossing pizzas on her roof.
So to combat the issue she's erecting a six-foot-tall fence around her property.
In “Caballo Sin Nobre,” the third episode of the third season of Breaking Bad, character Walter White flings a pizza on the roof of his home.
It's been seven years since the episode has aired and fans still visit the real-life Albuquerque home - owned by the Quintana family – and fling their own pizzas like a frisbee onto the roof.
According to the New York Post, the Quintana family has had enough of the constant pizza pie vandalism that they've put up an iron fence around the home.
“We just feel like we can’t leave because when we do, something happens,” said Joanne Quintana, whose mother owns the home, in an interview with KOB4. “And that's ridiculous.”
Quintana said she's lost count on how many tourists visit the home. While most take pictures of the home, others choose to take landscape rocks as a souvenir while others toss pizza.
Frank Sandoval, who runs a Breaking Bad sightseeing tour, said the pizza tosses happens so frequently that he's shoed off fans and had to remove a number of pies off the roof himself.
It's gotten so bad that at one point the program's showrunner Vince Gilligan, asked fans to stop the pizza toss.
"There is nothing original, or funny, or cool about throwing a pizza on this lady's roof," Gilligan said during an interview on the Better Call Saul Insider Podcast in 2015. "It's been done before -- you're not the first.”
The fence is expected to be completed soon, but fans of the show have still attempted to climb around it to snap pics of the home, KOB4 reported.
Walter White (played by Bryan Cranston) finds a pizza on his roof in Breaking Bad. (Handout photo)