Perhaps There Never Was Any Warming

and I thought things were just doin' vine

According to the preliminary results for April, 2017, from Germany’s DWD national weather service, the month came in at a mean temperature of 7.5°C for the central European country, or 0.8°C colder than the 1981-2010 mean of 8.3°C. This makes the month completely NOT in line with the warming that Germany’s DWD expected"

Meanwhile Alps-dominated of Austria saw it’s coldest April in 9 years – and the coldest in the current decade, according to the preliminary April results form the Austrian ZAMG national weather service.

New cold temperature records for the second half of April were set at the airports in Graz and Innsbruck at -5.5 °C and -4.4 °C respectively.

Meteo Suisse has not yet released it’s preliminary April report, as this is done typically around the 10th of the following month. But media reports show that the late April cold and frost did not spare Switzerland or northern Italy.

Bitter cold and crop destruction occurred in hard hit Switzerland. According to the online NZZ here, as a cold wave in the second half of April “caused great damage to fruit and vineyards in large parts of Switzerland“.

The cold wave also hit Italy’s farmers at a bad time, the NZZ reports, as some regions saw temperatures fall below zero and was accompanied by by icy winds. Frost destroyed the early white budding grape varieties such as the Chardonnay, Sauvignon and Pinot grigio. Also red grape sorts such as Cabernet and Merlot were hit, the NZZ reports.

The NZZ characterized the the vineyard damage as dramatic in the regions of Val d’Aosta and Friuli Venezia Giulia, where it reports that “many crops froze”.

In Piemont foremost in the region around Asti and Barolo there was heavy damage. In Lombardy the provinces of Padua, Mantua and Modena are hard hit.”

So where were the grapes being grown after? Answer:France and further south. Rains don't go away, they move south and it brings moistuer to arid locations. That is never published as it would be saying food production goes up during a ice-age and that is nothing to be afraid of let alone spending billions that end up just going to the Banksters, the same shitheads that started the false rumors.

Last solar cold spell the French suddenly couldn't grow above ground crops, and instead of switching to below ground crops, the resulting starvation led to the revolution.

I'm not saying this is accurate, it is the only one I've found and the ones about the tip of South Africa being the only safe place is bullshit.

Perhaps they should just leave it where God put it and stay with the good life theme as ir was the best of times. (rather than best of 'The Times')


Danbones said:
Last solar cold spell the French suddenly couldn't grow above ground crops, and instead of switching to below ground crops, the resulting starvation led to the revolution.

Jeez, I would have thought wood would have burned better...
Click to expand...

Witches need a big fire to be able to 'move on' or they just get pissed off and that is never a good thing.

petros said:
Time. Does your kettle get cold the instant you unplug it?

No chinooks North of Ded Reer? Lay off the smurfberry wine.
Click to expand...

My kettle begins to cool the instant it is unplugged. It does not keep on heating up the way the world has been doing for the last three decades. Your apologies for global warming are getting weaker and weaker.

I live north of Red Deer. We get about one Chinook-like event every decade. Maybe this map of the Chinook zone will help. 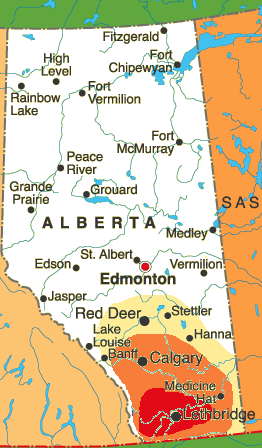 I'm going to assume you know winter winds coming from the west are Chinook Winds. (notice I didn't say 'bet')

I thought that the map showed the flow of Newfoundlanders going home for Christmas.

That is to show them how long to stay there after X-Mass. The more Chinook days the less frost and the less frost the easier the digging. Catching on ??

They are if they are in the areas marked yellow brown and red. The others areas don't qualify as the wind speeds are too low and the air hasn't been compressed enough to generate any heat. We used to call the Chinooks in the south (Yes I have lived there) snow-eaters. But I can only remember such a phenomenon about twice in the fifty years I've lived in the Edmonton area.
W

Bar Sinister said:
Except it is not happening.

Sun's Current Solar Activity Cycle Is Weakest in a Century

It's always nice to know that total fools like bar sinister who doesn't know what is going on with the Milankovich cycles is willing to make himself look even more stupid than usual.


Bar Sinister said:
Well, it should be getting colder. Why isn't it?
Click to expand...

Tell us something moron - when I showed the NASA temperatures from satellite reporting exactly why are you talking temperature changes? Why were you questioning whether NASA knew that when they HAVE the record? Are you so ignorant that you can't read what I wrote or are you just the normal uneducated fool who HAS to have some sort of cause to bitch about?

Wake said:
It's always nice to know that total fools like bar sinister who doesn't know what is going on with the Milankovich cycles is willing to make himself look even more stupid than usual.


Tell us something moron - when I showed the NASA temperatures from satellite reporting exactly why are you talking temperature changes? Why were you questioning whether NASA knew that when they HAVE the record? Are you so ignorant that you can't read what I wrote or are you just the normal uneducated fool who HAS to have some sort of cause to bitch about?
Click to expand...

Two insults. A sure sign that you have lost the argument. A real debater relies on facts, but you don't have any do you? Just fake science and the specious claim that you are some scientific expert. But as I keep pointing out, the argument about global warming is completely moot. Green tech is now cheaper than fossil fuels. Your beloved oil and coal industry is on the way out.

Michael Mann is an unrepentant and belligerent Technocrat who deceived the whole world with his so-called ‘hockey stick’ temperature model. His humiliation in a Canadian court should be a fatal blow to the entire climate change scam. Defying a judges direct order, Mann has refused to provide his data for public scrutiny. ⁃ TN Editor
Penn State climate scientist, Michael ‘hockey stick’ Mann commits contempt of court in the ‘climate science trial of the century.’ Prominent alarmist shockingly defies judge and refuses to surrender data for open court examination. Only possible outcome: Mann’s humiliation, defeat and likely criminal investigation in the U.S.

The defendant in the libel trial, the 79-year-old Canadian climatologist, Dr Tim Ball (above, right) is expected to instruct his British Columbia attorneys to trigger mandatory punitive court sanctions, including a ruling that Mann did act with criminal intent when using public funds to commit climate data fraud. Mann’s imminent defeat is set to send shock waves worldwide within the climate science community as the outcome will be both a legal and scientific vindication of U.S. President Donald Trump’s claims that climate scare stories are a “hoax.”

As can be seen from the graphs below; Mann’s cherry-picked version of science makes the Medieval Warm Period (MWP) disappear and shows a pronounced upward ‘tick’ in the late 20th century (the blade of his ‘hockey stick’). But below that, Ball’s graph, using more reliable and widely available public data, shows a much warmer MWP, with temperatures hotter than today, and showing current temperatures well within natural variation.
https://www.technocracy.news/index....ourtroom-act-ruins-michael-hockey-stick-mann/

...after the adjustments of course.
You must log in or register to reply here.
Top Bottom