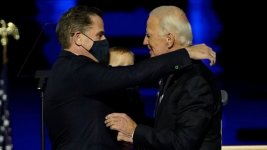 Nothing to see , move along. That prosecutor was corrupt by the way .
Reactions: petros and Twin_Moose

Big Tech like big government is not your friend .
Reactions: Twin_Moose, taxslave, B00Mer and 1 other person

Hunter Biden’s former business partner sent him an email in 2017 saying he did not disclose on his tax returns $400,000 in income from the Ukrainian natural gas company where he sat on the board, according to a copy of the email obtained by NBC News.

The message from Eric Schwerin, then president of Rosemont Seneca Partners, says Hunter Biden would need to “amend” his 2014 returns to reflect the “unreported” income, according to the copy of the email.

“In 2014 you joined the Burisma board and we still need to amend your 2014 returns to reflect the unreported Burisma income,” says the email dated Jan. 16, 2017.

The email goes on to note that Hunter Biden, who is now the subject of a federal tax probe, netted more than $1.2 million for the year. The earnings include the $400,000 from Burisma as well as income from Rosemont Seneca Advisors and a legal firm..........More Here

WASHINGTON — A subpoena seeking documents from Hunter Biden asked for information related to more than two dozen entities, including Ukraine gas company Burisma, according to a person familiar with a Justice Department tax investigation of President-elect Joe Biden's son.

The breadth of the subpoena, issued Tuesday, underscores the wide-angle lens prosecutors are taking as they examine the younger Biden’s finances and international business ventures.

Hunter Biden's ties to Burisma in particular have long dogged the policy work and political aspirations of his father, Joe Biden, now the president-elect of the United States. It's unclear whether Hunter Biden's work at the Ukrainian company is a central part of the federal investigation or whether prosecutors are simply seeking information about all his sources of income in recent years.

The person was not authorized to discuss an ongoing investigation publicly and spoke to The Associated Press on condition of anonymity.

A lawyer for the younger Biden, George Mesires, did not immediately return a phone message seeking comment for this story and a spokesman for the Biden transition team declined to comment.

Hunter Biden confirmed Wednesday that his taxes are under federal investigation. The revelation comes at a delicate time for the president-elect, who is building out his Cabinet and will soon decide on his nominee to run the Justice Department, the same department overseeing the investigation into his son.

The probe was launched in 2018, the year before his father announced his candidacy for president. At one point in the investigation, federal prosecutors were also examining potential money laundering offences, two people familiar with the matter told the AP......More Here
Reactions: taxslave

Hunter Biden requested in 2017 that keys be made for his new "office mates," listing his father, President-elect Joe Biden, Jill Biden and his uncle, Jim Biden, for space he planned to share with an "emissary" for a chairman of a Chinese energy company, according to an email obtained by Fox News.


The Sept. 20, 2017 email, obtained by Fox News, shows Hunter requesting keys for Joe and Jill Biden, along with his uncle, Jim Biden, to the general manager, Cecilia Browning, at the House of Sweden -- a building in Washington, D.C., which contains multiple office suites, as well as a number of embassies.

The email was first reported on by The Daily Caller.

In the email, Hunter Biden also requests keys for Gongwen Dong, whom he describes as an “emissary” for Chairman Ye Jianming -- the chairman of CEFC Chinese Energy Co.

“I would like the office sign to reflect the following,” he continued, requesting “The Biden Foundation” and “Hudson West (CEFC US).”

“The lease will remain under my company’s name Rosemont Seneca,” he continued, providing details about Dong and Ye, whom he referred to as "my partner," as well as their contact information..........Much More in the link 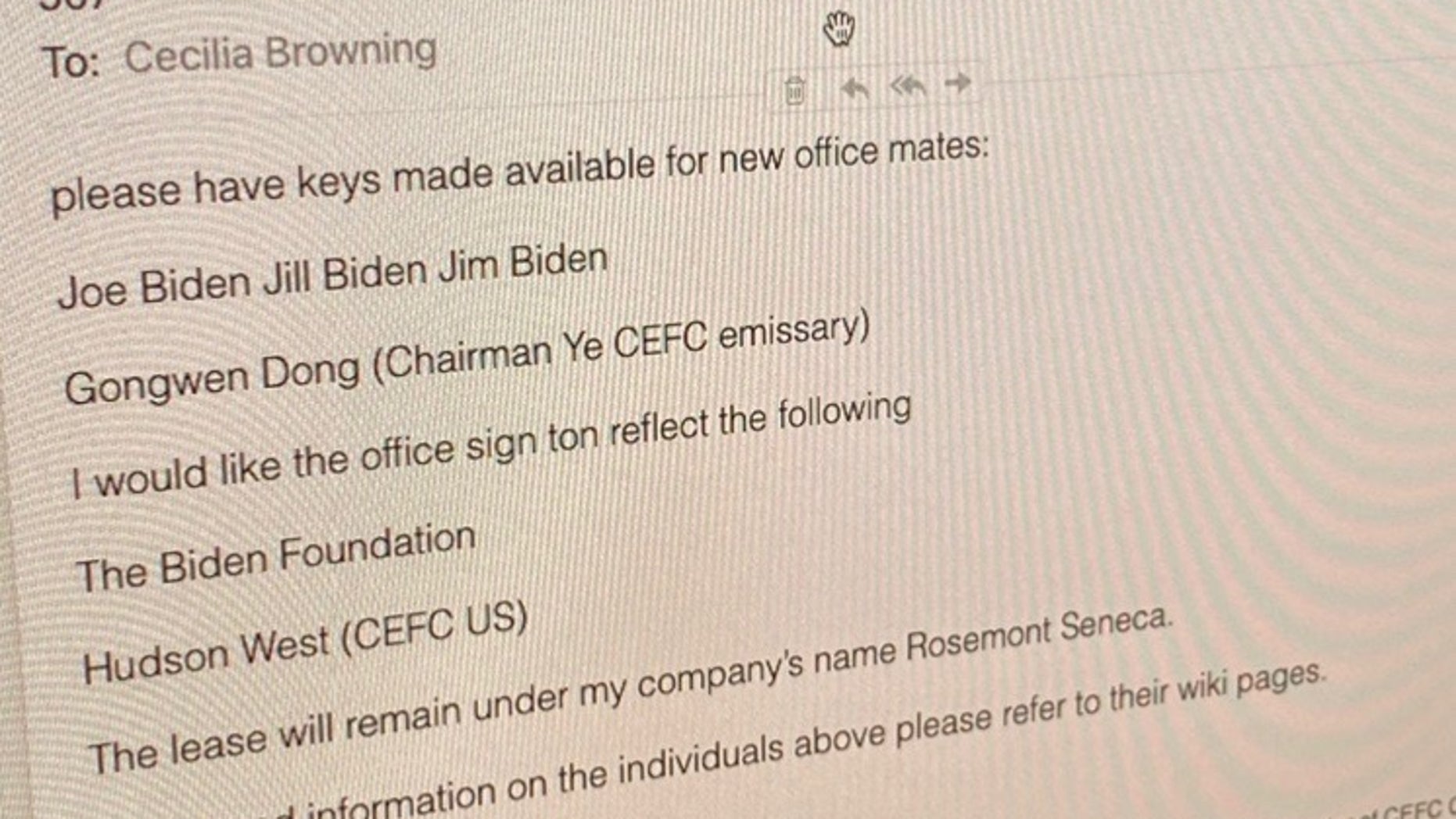 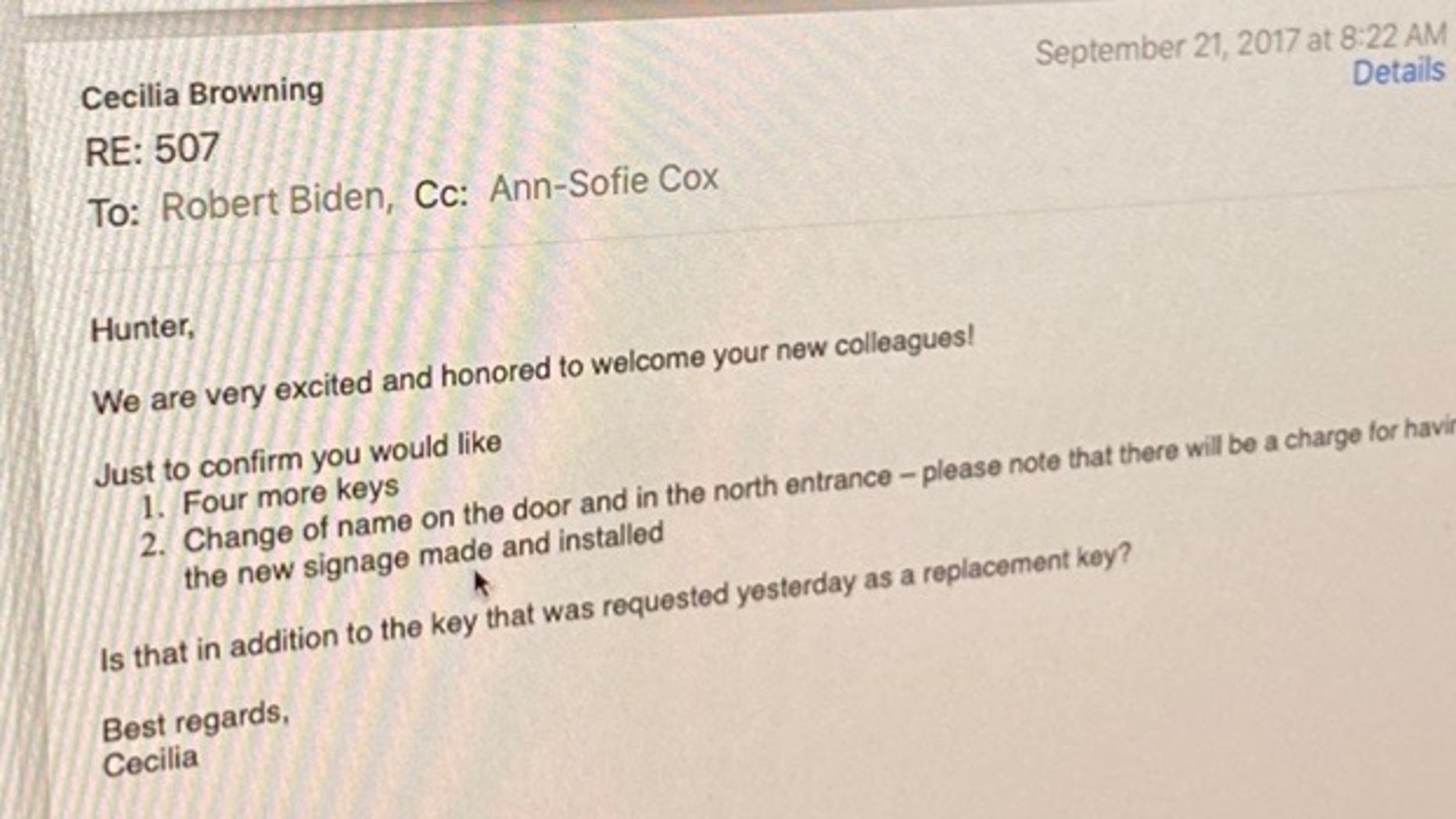 sounds like a future president in the making.
Reactions: Twin_Moose, B00Mer and petros

Strange! I can lip read, so I can tell that they are laughing as they talk about Trumps micro-p*nis.
G

Joe Biden may or may not be a fairly reasonable & competent POTUS. However, the fact that he isn't (no one could be) a narcissistic pathological liar, serial adulterer etc.as Trump is, is all that is needed at this time. His refusal to accept election results borders on the infantile.
G

It is also phony bullsh**

It's been out for a couple of days and no one is refuting it
You must log in or register to reply here.
Top Bottom