Eerie Planet of the Apes experiment sees scientists insert human genes in monkey brain
Author of the article:
Postmedia News
Publishing date:
Nov 20, 2020 • Last Updated 5 hours ago • 1 minute read
Tim Roth, left, and Mark Wahlberg in Planet of the Apes. Photo by archives
In an experiment that could foreshadow a real-life Planet of the Apes scenario, scientists successfully spliced human genes into a monkey’s fetus to substantially increase the size of the primate’s brain.
Researchers from Germany’s Max Planck Institute of Molecular Cell Biology and Genetics and Japan’s Central Institute for Experimental Animals introduced a human gene, ARHGAP11B, into the fetus of a common marmoset monkey, causing the enlargement of its brain’s neocortex.
The scientists reported their findings in the journal Science.
The expansion of the human brain during evolution, specifically of the neocortex, is linked to our cognitive abilities such as reasoning and language.
The experiments evoke images of the Planet of the Apes films, where genetically modified primates wage a war on humanity.
“We found indeed that the neocortex of the common marmoset brain was enlarged and the brain surface folded,” said study author Michael Heide of the German-based institute. “(We also saw) increased numbers of upper-layer neurons, the neuron type that increases in primate evolution.”
The human neocortex, the evolutionarily youngest part of the cerebral cortex, is about three times bigger than that of our closest relatives, the chimpanzees, and its folding into wrinkles increased during evolution to fit inside the restricted space of the skull.

In an experiment that could foreshadow a real-life Planet of the Apes scenario, scientists successfully spliced human genes into a monkey’s fetus to…

The hubris of humanity will be their downfall.
Reactions: Twin_Moose and Aetheric

This can only end well.

I hope this means we can finally fling poop without being ostracized by our peers.
Reactions: petros

Check out the big brain on Brad.
Reactions: Twin_Moose

if only they could inject brain cells into politicians.

spaminator said:
if only they could inject brain cells into politicians.

sorry i should have said if only they could put brains into politicians.

TheShadow said:
I hope this means we can finally fling poop without being ostracized by our peers.
Click to expand...

Become a politician. They do it all the time. 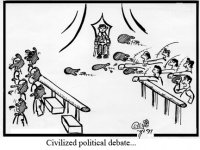 Cliffy said:
Become a politician. They do it all the time.View attachment 2966
Click to expand...

Notice it's the left that's flinging the poop?
Reactions: petros, Twin_Moose and DaSleeper
You must log in or register to reply here.
Top Bottom