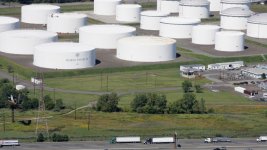 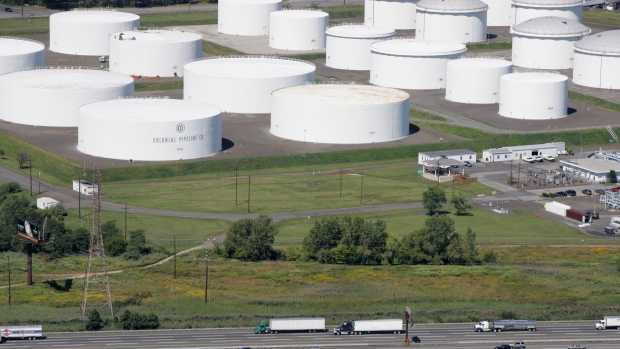 B00Mer said:
Even posting that on the Internet is cause for the USA to invade Canada

Lake Superior , or the Saint Lawrence Seaway , they don’t want that pert .
Reactions: Twin_Moose, taxslave, petros and 1 other person

B00Mer said:
Even posting that on the Internet is cause for the USA to invade Canada

If Trump was still in power, maybe. Biden doesn't have the balls. Nancy might though.
Reactions: Twin_Moose

Top U.S. fuel pipeline operator Colonial Pipeline shut its entire network, the source of nearly half of the U.S. East Coast's fuel supply, after a cyberattack on Friday that involved ransomware.
www.ctvnews.ca
Click to expand...

That should be a hanging offense.

The people that do this should be shot.
Reactions: B00Mer

If only the USA was Energy Independent again, they wouldn't be having this spike in prices..

The attack on the Colonial Pipeline, which carries nearly half the fuel consumed along the U.S. East Coast, is one of the most disruptive digital ransom schemes ever reported.


While the impact remains to be quantified, the pipeline shutdown will reduce fuel availability in the near term, push up prices and force refiners to cut production because they have no way to ship the gas.

The privately owned company said on Monday it was working on restarting in phases with “the goal of substantially restoring operational service by the end of the week.”


The FBI attributed the cyberattack to DarkSide, a group believed to be based in Russia or Eastern Europe. Its ransomware targets computers that do not use keyboards in the languages of former Soviet republics, cyber experts said.

This advertisement has not loaded yet, but your article continues below.
Article content
President Joe Biden said there was no evidence thus far that Russia’s government was involved.

‘GOAL IS TO MAKE MONEY’

A statement issued in the group’s name on Monday said: “Our goal is to make money, and not creating problems for society.” Its statement did not mention Colonial Pipeline by name.

Ransomware is a type of malware designed to lock computers by encrypting data. The hackers demand payment to let the owner regain access. It is unknown how much money the hackers are seeking, and Colonial has not commented on whether it would pay.

Anne Neuberger, deputy national security adviser for cybersecurity, told reporters that the Biden administration is not offering advice on whether Colonial should pay the ransom.

Colonial on Friday shut its 5,500-mile (8,850-km) pipeline network, which moves fuels including gasoline, diesel and jet fuel, to protect its systems.

A spokesman for United Nations Secretary-General Antonio Guterres said the attack showed that U.N. member states needed to combat cybercrime to avoid a “devastating impact on the world that we all live in.”

Colonial restarted some smaller lines on Sunday between fuel terminals and customer delivery points, releasing fuel stored locally to customers. On Monday, it also began manually operating its 700,000-barrel-per-day multi-product fuel line between Greensboro, North Carolina, and Maryland for a limited time while it has existing inventories.

This advertisement has not loaded yet, but your article continues below.
Article content
But its main lines remained shut, and an alternative, smaller conduit operated by Kinder Morgan Inc serving the same region reached capacity.

The outage hit ahead of the summer vacation season, when gasoline demand and airline travel tend to peak.

PAIN AT THE PUMP?

The American Automobile Association said the national average gasoline price climbed to $2.96 a gallon and could climb to its highest level since 2014.

Florida resident Katina Willey went to several gas stations before she found one that had fuel available. “There were lines at three of the five stations I tried,” she said.

If the disruption stretches on, fuel suppliers could ship by truck and rail instead. The Department of Transportation on Sunday lifted driver restrictions on fuel haulers in 17 states affected by the shutdown.

U.S. fuel importers are booking tankers to bring gasoline from Europe. U.S. refiners including Motiva Enterprises and Total cut output at Gulf Coast plants on Monday because of a lack of transport.

“Do not fill plastic bags with gasoline” the agency said on Twitter, followed by “Use only containers approved for fuel.”


A ransomware attack on the Colonial Pipeline last week halted 2.5 million barrels per day of fuel shipments. On Wednesday, fuel shortages worsened in the southeastern United States, as gasoline stations ran out of supply in some cities.

The supply crunch and panic buying have brought long lines and high prices at the pump ahead of the Memorial Day holiday weekend at the end of this month, which traditionally marks the start of the peak summer driving season.

Getting consumers to think more carefully was an important theme for the agency, which also tweeted an acknowledgement that “when people get desperate they stop thinking clearly.” The agency asked consumers to tell people using a container not meant for fuel: “please let them know it’s dangerous.”

This advertisement has not loaded yet, but your article continues below.
Article content
The agency stressed that it does not mean to talk down to consumers.

“Sometimes when we put out a safety message like this people use it as a way to look down on others. We ask that instead you use this as an opportunity to reflect on safety in your own life,” it said in another tweet.

This advertisement has not loaded yet, but your article continues below.
Article content
Privately owned Colonial Pipeline manually opened portions of the line to release needed supplies in Georgia, Maryland, New Jersey and the Carolinas. It has accepted 2 million barrels of fuel to begin a restart that would “substantially” restore operations by week’s end, the company said.

The supply crunch sparked panic buying by motorists, bringing long lines and high prices at gas stations ahead of the Memorial Day holiday weekend at the end of this month, the traditional start of the peak summer driving season.

The average national gasoline price rose to above $3.00 a gallon on Wednesday, the highest since October 2014, the American Automobile Association said.

Nearly 60% of gas stations in metro Atlanta were without gasoline on Wednesday, tracking firm GasBuddy said. More than 70% of stations were out in metro Charlotte and Raleigh, North Carolina, and Pensacola, Florida. Virginia and South Carolina also saw relatively high outages.

The FBI has accused a shadowy criminal gang called DarkSide of the ransomware attack. DarkSide is believed to be based in Russia or Eastern Europe.

Russia’s embassy in the United States rejected speculation that Moscow was behind the attack. President Joe Biden on Monday said there was no evidence so far that Russia was responsible.

This advertisement has not loaded yet, but your article continues below.
Article content
It is unknown how much money the hackers are seeking, and Colonial has not commented on whether it would pay.

Citgo said it was moving products from Lake Charles and “exploring alternate supply methods into other impacted markets.” Marathon Petroleum, another large refiner, said it was “making adjustments” to operations.

'Do not fill plastic bags with gasoline' U.S. warns as shortages grow over ransomware attack

WASHINGTON — The U.S. Consumer Product Safety Commission on Wednesday warned Americans to not fill plastic bags with gasoline as fuel shortages worsened on the…

Let this be a lesson in computer dependency.

Should be a hanging offense.

The company paid the ransom in untraceable cryptocurrency within hours after the attack, according to the report.

Trackerdslogo
After a six-day outage, the top U.S. fuel pipeline on Thursday moved some of the first millions of gallons of motor fuels after a crippling cyberattack led to fuel shortages across East Coast states.

Colonial, which carries 100 million gallons per day of gasoline, diesel and jet fuel, said Thursday it had begun supplying some fuel to most areas along its 5,500 mile (8,850 km) route.


The shutdown caused gasoline shortages and emergency declarations from Virginia to Florida, led two refineries to curb production, and had airlines reshuffling some refueling operations.

This advertisement has not loaded yet, but your article continues below.
Article content
The pipeline’s restart should bring supplies to some hard-hit areas as soon as Thursday, said U.S. Energy Secretary Jennifer Granholm. She added that the fuel market should return to normal by the end of the weekend.

Motorists’ tempers frayed as panic buying led stations to run out even where supplies were available.

The average national gasoline price rose above $3.00 a gallon, the highest since October 2014, the American Automobile Association said, and prices in some areas jumped as much as 11 cents in a day.

As FBI cybersleuths dug into an attack that paralyzed a large part of the U.S. energy infrastructure, the group believed to be responsible said it was publishing data from breaches at three other companies, including an Illinois technology firm.


It was not known how much money the hackers were seeking and the pipeline operator has declined to comment. Colonial has a type of insurance that typically covers ransom payments, three people familiar with the matter told Reuters on Thursday.

The U.S. also issued a waiver to an undisclosed shipper allowing it to transport gasoline and diesel from the U.S. Gulf coast to East Coast ports on foreign-flagged vessels. The U.S. restricts deliveries between domestic ports to U.S.-built and crewed vessels.

Gulf Coast refiners that move fuel to market on the Colonial Pipeline had cut processing as an alternative pipeline filled to capacity last weekend. Total SE trimmed gasoline production at its Port Arthur, Texas, refinery and Citgo Petroleum pared back at its Lake Charles, Louisiana, plant.

Airlines began refueling planes at their destinations, instead of usual departure points. On Wednesday, Delta Air Lines Chief Executive Ed Bastian said more fuel would be available “hopefully by the end of the week and as long as those predictions come true, hopefully we’ll be OK.”