And again... (Another US Shooting)

GIve me a frucking break.
Reactions: taxslave, Twin_Moose, B00Mer and 1 other person

It is a little too soon to be coughing this tragedy for a separate cause…
Reactions: taxslave and Twin_Moose

This country was freed from tyranny by crazy assholes with guns!

This country was freed from tyranny by crazy assholes with guns!
Click to expand...

Jailah Silguero, among the fourth graders killed in the Uvalde, Texas, elementary school mass shooting, didn’t want to go to school that morning, according to her grandmother.


But with only two days left, her mother told her she must.

“Jailah didn’t want to go to school yesterday,” grandma Linda Gonzales told the Daily Beast, according to the New York Post. “That’s what her momma was really upset about last night: ‘If only I had let her stay home.’”

The girl’s cousin, Jayce Carmelo Luevanos, was also among the 19 children killed.

Gonzales said Jailah and Jayce were the babies of the family and the former loved to dance and the latter loved to make people laugh.

“They were just so sweet,” she told The Daily Beast. “They were sweet kids and lovable. What can you say about little innocent kids?”

Gonzales said Jailah’s mother Veronica Luevanos spent hours going back and forth between the school and the civics center where parents were being reunited with their children.


“They didn’t realize there were dead children in the school,” Gonzales said.

“They kept telling them: go to (the) hospital or go to the civic center. Nobody was told there’s dead kids in there. Nobody.”

Overall, 21 people were killed, including two teachers, when 18-year-old Salvador Ramos entered the school and allegedly started shooting at “whoever’s in his way.”

Gonzales told The Daily Beast one her nephews, who works with the local sheriff’s department, left the horrific scene of the mass shooting drenched in blood.

“He picked up some children to lay them in someplace so they could be covered,” said Gonzales. “He’ll never forget the scene.”

Jailah Silguero, among the fourth graders killed in Uvalde, Texas, didn’t want to go to school that morning, according to her grandmother.

"Please excuse li'l Juanito from school today. He is allergic to bullets."
Reactions: taxslave and pgs

IdRatherBeSkiing said:
If they violated procedures, they should face whatever disciplinary action comes from that. If they followed procedures and the procedures were weak, then they should be updated.
Click to expand...

We've been "updating" them for over 20 years. Cowards gonna cower.

Since the 1999 massacre at Columbine High School, police have been instructed to go after an attacker as soon as possible, a change from the previous tactics of waiting until a tactical group, such as a SWAT team, could assemble.
After Columbine, and then again after the Sandy Hook massacre in 2012, “law enforcement aggressively began training to respond immediately to neutralize a shooter,” said Katherine Schweit, a retired senior FBI official who started the bureau’s active-shooter program.
“Under all circumstances, that is their first priority.”
Schweit cautioned that it was still early and that more information would probably emerge about the Uvalde shooting. But a decade of working on this issue, she said, has taught her that it’s pivotal for officials to stop the shooter “in whatever way that needs to happen.”
Click to expand...

IdRatherBeSkiing said:
If you require meds, then no gun for you is how it should be. Too many cases of a crazy person killing someone after they thought they were better and stopped taking their meds.
Click to expand...

How it should be, but it's not. Moreover, you ask any of the pro-gun types about mental health and guns, they avoid the questions like you're the media.

Serryah said:
How it should be, but it's not. Moreover, you ask any of the pro-gun types about mental health and guns, they avoid the questions like you're the media.
Click to expand...

It goes beyond just guns. The whole idea of leaving someone to their own recognizance with the promise they take their pills is ludicrous too. Not how it should be but how it is. The guy who severed the guy next to his head on a bus was 'cured with pills' but left to take his own pills which he didn't and we know what happened. No gun in that case, just a machete. Some doc sees the guy is doing better inside the institution, writes a script for some pills and moves them along. I think the killer is back out on day passes now because he has pills again.
Reactions: taxslave and Twin_Moose

"Biden Is A Traitor"

"Biden Is A Dictator"

The mass acceptance of this colossal CLUSTERFUCK of a shitshow is just... disgusting and yet heartbreakingly unsurprising.
Reactions: Ron in Regina

“Unlike Some, I Didn’t Disappoint You By Not Showing Up” – President Trump at NRA Convention in Houston (VIDEO)​

The mass acceptance of this colossal CLUSTERFUCK of a shitshow is just... disgusting and yet heartbreakingly unsurprising.
Click to expand...

Normally I would describe a situation like this as a goat rodeo but I don’t think the term is strong enough so let’s just call it a cluster fuck as you’ve done. Holy Christ…. I cannot comprehend, policy are not, how anybody cannot step in and step up when children are in danger.

I’m sure this story is going to change and evolve as the different entities try to cover their arses in hindsight, but wow… 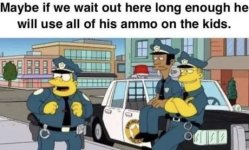 What if (?)…. What if this situation wasn’t located close enough for CBP to step in?
Reactions: Twin_Moose
You must log in or register to reply here.
Top Bottom