Looks like it may only work in BC and Alberta right now, meh.
Found via:Website tracks temporary foreign workers | Globalnews.ca

It's similar to what we've seen elsewhere, with businesses offering more unpaid internships to bus tables and serve food...there's merit to the program, but when parasitic business models take it over it loses the luster.
T

I'll bet you've already guessed what Step #2 is -- replying to the Canadian applicants.


"Employers are required to post job listings seeking Canadian workers first, and leave those ads up for four weeks, before they can be given the green light to hire temporary foreign workers."I probably apply for about five jobs a month from the job bank and I have for a few months," said one job-seeker, speaking on condition of anonymity for fear of harming his employment prospects."I have never heard a word back from any of the companies I've applied to." An email address set up by The Canadian Press in recent weeks has also failed to garner any responses from employers when asking for more information about postings in various sectors. One of the jobs included a shelf-stocking position at a Canadian Tire in Red Deer, Alta., that already employs several temporary foreign workers.Employers need only tell the government that they were unable to find a qualified Canadian after posting their positions on the job bank.


" Canada's economy unexpectedly loses 28,900 jobs in April"The number of employees plunged in April to a loss of 46,000 jobs, a figure that was offset in part by the addition of 17,200 self-employed positions. ....the biggest loss struck the accommodation and food services industry, where 32,200 fewer people found work."
http://ntfw.ca/map-companies-hiring-temporary-foreign-workers/ 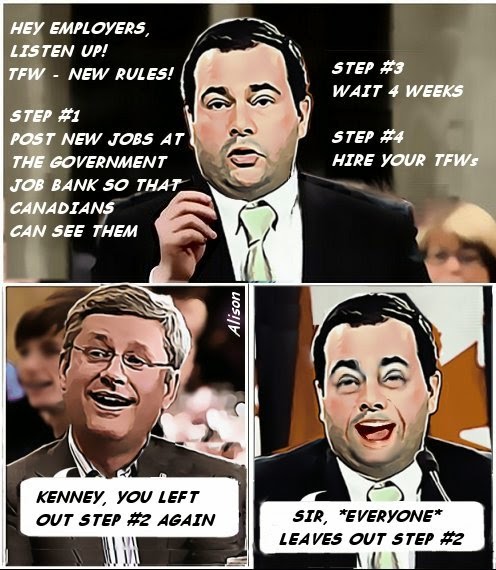