Stricter Ontario COVID measures before cabinet
Curfew is a non-starter, but stronger measures may be coming Tuesday
Brian Lilley
Jan 12, 2021 • Last Updated 7 hours ago • 3 minute read
Ontario Premier Doug Ford at a media availability at Pearson International Airport in Toronto on Wednesday, January 6, 2021. Photo by Nathan Denette /The Canadian Press
A curfew is off the table, but declaring a second state of emergency is not.
The Ford cabinet began meeting at 5 pm Monday to go over a series of proposals on what they could do next to try and contain COIVD-19.
Closing certain businesses or workplaces including big box stores, construction sites and some manufacturing plants are all on the table.
The new measures will be announced Tuesday after the province unveils new modelling that will show all key indicators heading in the wrong direction.
Far beyond being about daily case counts, the province is focused on hospital capacity, including ICU admissions.
On Monday morning the Ontario Hospital Association said that there were 409 COVID-19 patients out of a province wide total of 1,756 available beds.
That works out to COVID patients taking up 23% of all beds, in some parts of the province COVID patients are taking up 40% or more of ICU beds.
The government is trying to ensure that, unlike the spring, surgeries and other treatments for illnesses such as cancer are not cancelled.
Cancelling those procedures during the first lockdown did allow the province to temporarily add an extra 1,492 ICU bed, but the goal this time is to keep those procedures going.
Thus, the move for greater restrictions — though government officials admit there is little left that they can do.
One option that has been floated and debated over the weekend was following Quebec’s lead and imposing a curfew.
Late Monday morning the government let it be known that public health officials were not recommending a curfew in their package of proposed measures.
“There isn’t very good evidence one way or the other about whether curfews work or not,” Dr. Barbara Yaffe said Monday afternoon.
The province’s associate medical officer pointed to problems of enforcement and stigmatization among others — all for a measure that may not actually reduce spread in any significant way.
“If people were just follow the basic public health measures that we have repeated many, many times, that is what will, in the end, help us reduce the infection,” Yaffe said.
“Keep away from people that are not in your household, wear a mask all the time. Don’t go out if you are sick, wash your hands.”
As for where new infections are coming from, Yaffe said that other than health care settings and nursing homes, workplaces are becoming problematic.
She said that includes break rooms and even people carpooling to work — which is why the government is considering closing more work sites, including some in the construction and manufacturing sectors.
Also up for consideration is restricting big box stores to curbside pick-up only, or limiting what they can sell in-person to essentials such as groceries.
The government has come under fire for not moving fast enough to act after Premier Ford said that the latest models were scary.
I would have liked to have seen the modelling as soon as he mentioned it but the truth is, the modelling wasn’t complete.
Ford had been briefed on part of it and any actions to close business can take time.
Despite the thought that governments can simply demand certain businesses close, there are regulations to draft and the language needs to be precise if it is to stand up to any legal challenges.
This may be part of the reason the province is considering declaring an emergency once again.
Invoking the Emergency Management and Civil Protection Act would give the province sweeping new powers to act quickly as the second wave of the pandemic develops.
The province invoked the act on March 17, but later rescinding it on July 24 and instead relying on the Reopening Ontario Act.
All of these measures, and more, are before cabinet, and their decisions on which proposals to act on will be announced on Tuesday.

Curfew is a non-starter, but stronger measures may be coming Tuesday

"If people were just follow the basic public health measures that we have repeated many, many times, that is what will, in the end, help us reduce the infection,"

⁣Dr. Vernon Coleman needs no introduction. After discussing the latest government and NHS pronouncements on the virus and lockdown measures, Vernon explains WHY he believes we are being locked into our homes as our jobs

brandnewtube.com
(Vernon is the top medical writer in the UK)

ONE PISSED OFF DOCTOR - MASKS ARE KILLING YOU - TAKE THEM OFF NOW! - PLEASE SHARE THIS VIDEO

⁣This U.S. Doctor is telling you the TRUTH about how wearing masks is literally killing you and this is what they hope will happen to all of us. Wake Up now before you're DEAD!

But be warned, you can be waterboarded on a table, on the ground, upside down — in short, nearly any position. The tools of waterboarding are all around, and readily accessible. All that’s needed is water and a t-shirt.

If you're too dumb to understand how masking works then there is no point in explaining it. The same people think that the earth is flat.

i quoted a doctor and being a chemical compounder in a pharma company for three years I do know how masks work
BUB
now go waterboard yourself and please remember ( if you can ) O2 deprivation is irreparable.

also Vernon Coleman is top dr and writer and you are an faceless nobody. 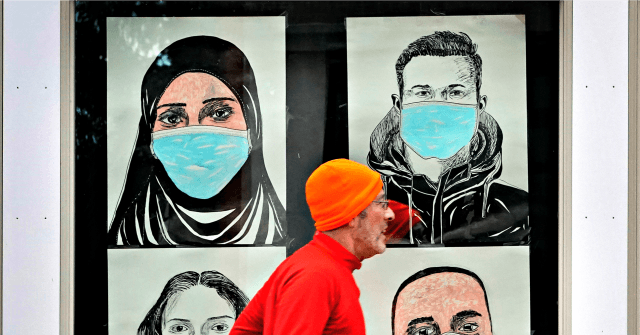 U.S. governors have imposed statewide or limited mask mandates in all 50 states, including 35 that have seen record coronavirus infections.

The number of people infected with COVID-19 continues to climb, but what no one seems to be asking is how accurate are these numbers and the tests we’re using to determine them? How many of us are actually infected and how scared should we really be? I’ve done some digging and the answers may shock you.
​

The Test and the Numbers are Grossly Inaccurate​

man I hate stupid GENOCIDAL NUTBARS... But at least you ain't going to catch the flu though.
Last edited: Jan 12, 2021

lol, a person who can't tell the difference between dying with and dying from callin' me a dumbie...

You probably do but are desperate to prove a narrative that's incorrect.
Which makes you even dumber.
I can quote 30 people to each one of yours.
You're just wrong and you know it.
You must log in or register to reply here.
Top Bottom