The giant rock, which is bigger than the Empire State Building, will come as close as 5.6 million kilometres away from Earth.

The asteroid is known as 388945 (2008 TZ3)and is expected to make its closest approach on Sunday, according to the New York Post.

The same asteroid passed the earth back in May 2020, and came much closer to the Earth — just 2.7 million kilometres away.

About every two years it comes by, although this will be the closest it will be until May 2163, according to the report. 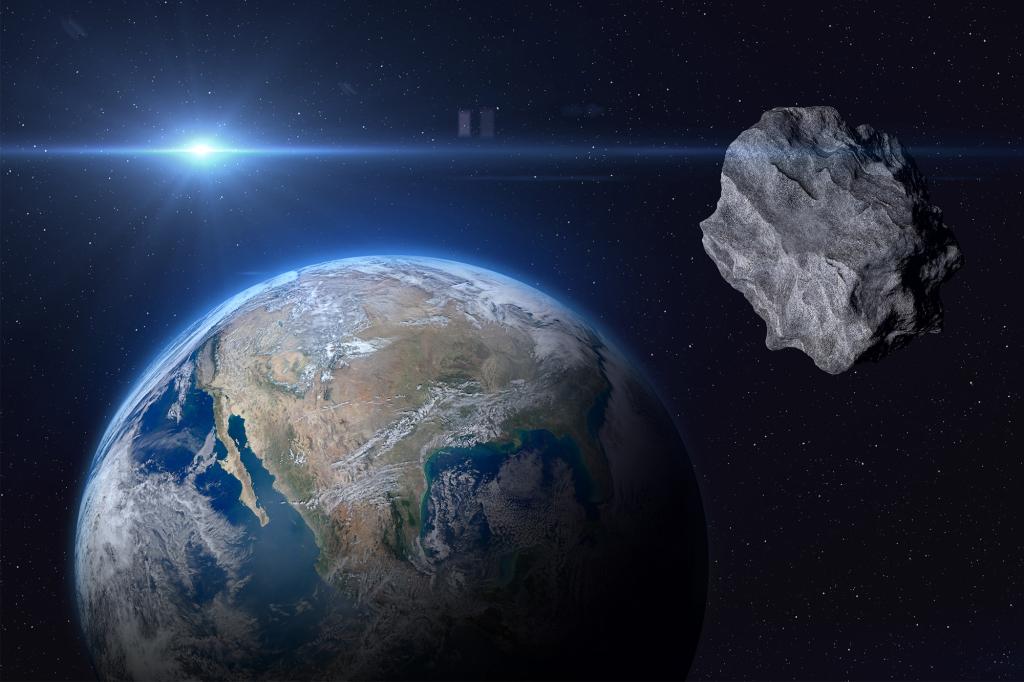 NASA has been keeping an eye on the massive asteroid bigger than the Empire State Building and has revealed it’ll be a “close approach” in space terms. 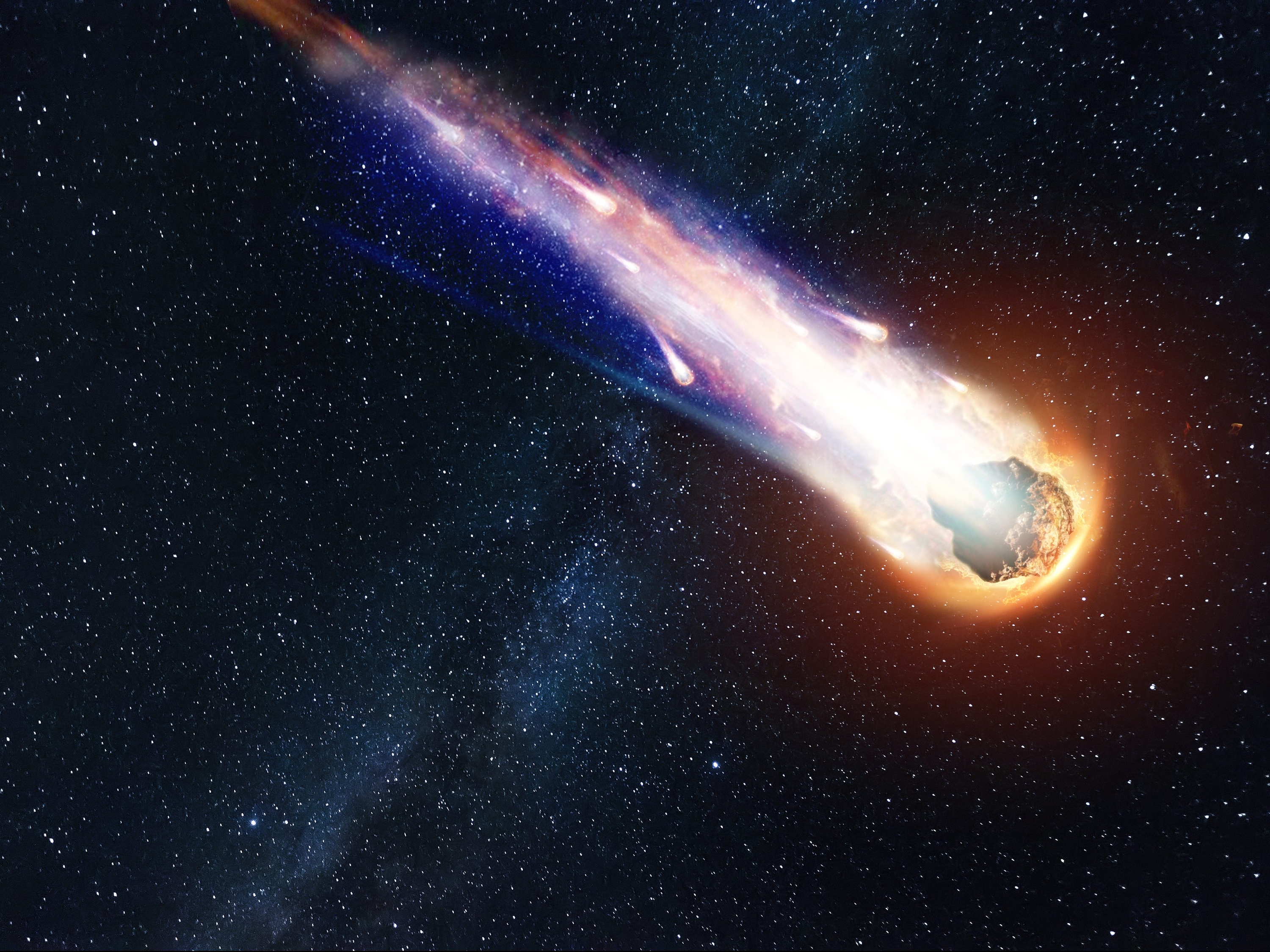 
The black hole – called Sagittarius A*, or Sgr A* – is only the second one ever to be imaged. The feat was accomplished by the same Event Horizon Telescope (EHT) international collaboration that in 2019 unveiled the first-ever photo of a black hole – that one residing at the heart of a different galaxy.

University of Arizona astronomer Feryal Ozel, at a news conference in Washington, hailed “the first direct image of the gentle giant in the centre of our galaxy,” showing a glowing ring of red, yellow and white surrounding a darker centre.

Sagittarius A* (pronounced Sagittarius “A” star) possesses 4 million times the mass of our sun and is located about 26,000 light-years – the distance light travels in a year, 9.5 trillion km – from Earth.


Black holes are extraordinarily dense objects with gravity so strong that not even light can escape, making viewing them extremely challenging. A black hole’s event horizon is the point of no return beyond which anything – stars, planets, gas, dust and all forms of electromagnetic radiation – gets dragged into oblivion.

Project scientists have looked for a ring of light – super-heated disrupted matter and radiation circling at tremendous speed at the edge of the event horizon – around a region of darkness representing the actual black hole. This is known as the black hole’s shadow or silhouette.

“This image shows a bright ring surrounding the darkness, the telltale sign of the shadow of the black hole,” Ozel said. “Light escaping from the hot gas swirling around the black hole appears to us as the bright ring. Light that is too close to the black hole – close enough to be swallowed by it – eventually crosses its horizon and leaves behind just a dark void in the centre.”


“It turned out to be a gentler, more cooperative black hole than we had hoped for in the past decade of simulating its environment,” Ozel added. “We love our black hole.”

The Milky Way is a spiral galaxy that contains at least 100 billion stars. Viewed from above or below it resembles a spinning pinwheel, with our sun situated on one of the spiral arms and Sagittarius A* located at the centre.

The image released in 2019 showed the supermassive black hole in a galaxy called Messier 87, or M87. The M87 black hole is far more distant and massive than Sagittarius A*, situated about 54 million light-years from Earth with a mass 6.5 billion times that of our sun.


The researchers said that Sagittarius A*, despite being much closer to our solar system than M87, was harder to image.

The diameter of Sagittarius A* is about 17 times that of the sun, meaning it would sit within the innermost planet Mercury’s solar orbit. In contrast, M87’s diameter would encompass the entirety of our solar system.

“Sagittarius A* is over a thousand times less massive than the black hole at M87, but since it is in our own galaxy it is much closer and should appear just slightly larger on the sky,” said radio astronomer Lindy Blackburn, an EHT data scientist at the Harvard-Smithsonian Center for Astrophysics.

“However the smaller physical size of Sgr A* also means that everything changes about a thousand times faster for Sgr A* than M87. We must also peer through the messy disk of our own galaxy to view Sgr A*, which blurs and distorts the image,” Blackburn added.


The Event Horizon Telescope is a global network of observatories working collectively to observe radio sources associated with black holes. The project was begun in 2012.

There are different categories of black holes. The smallest are so-called stellar-mass black holes formed by the collapse of massive individual stars at the ends of their life cycles. There also are intermediate-mass black holes, a step up in mass. And finally there are the supermassive black holes that inhabit the centre of most galaxies. These are thought to arise relatively soon after their galaxies are formed, devouring enormous amounts of material to achieve colossal size.

Thursday’s announcement was made in simultaneous news conferences in the United States, Germany, China, Mexico, Chile, Japan and Taiwan. 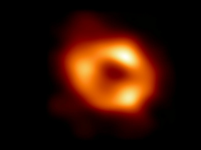 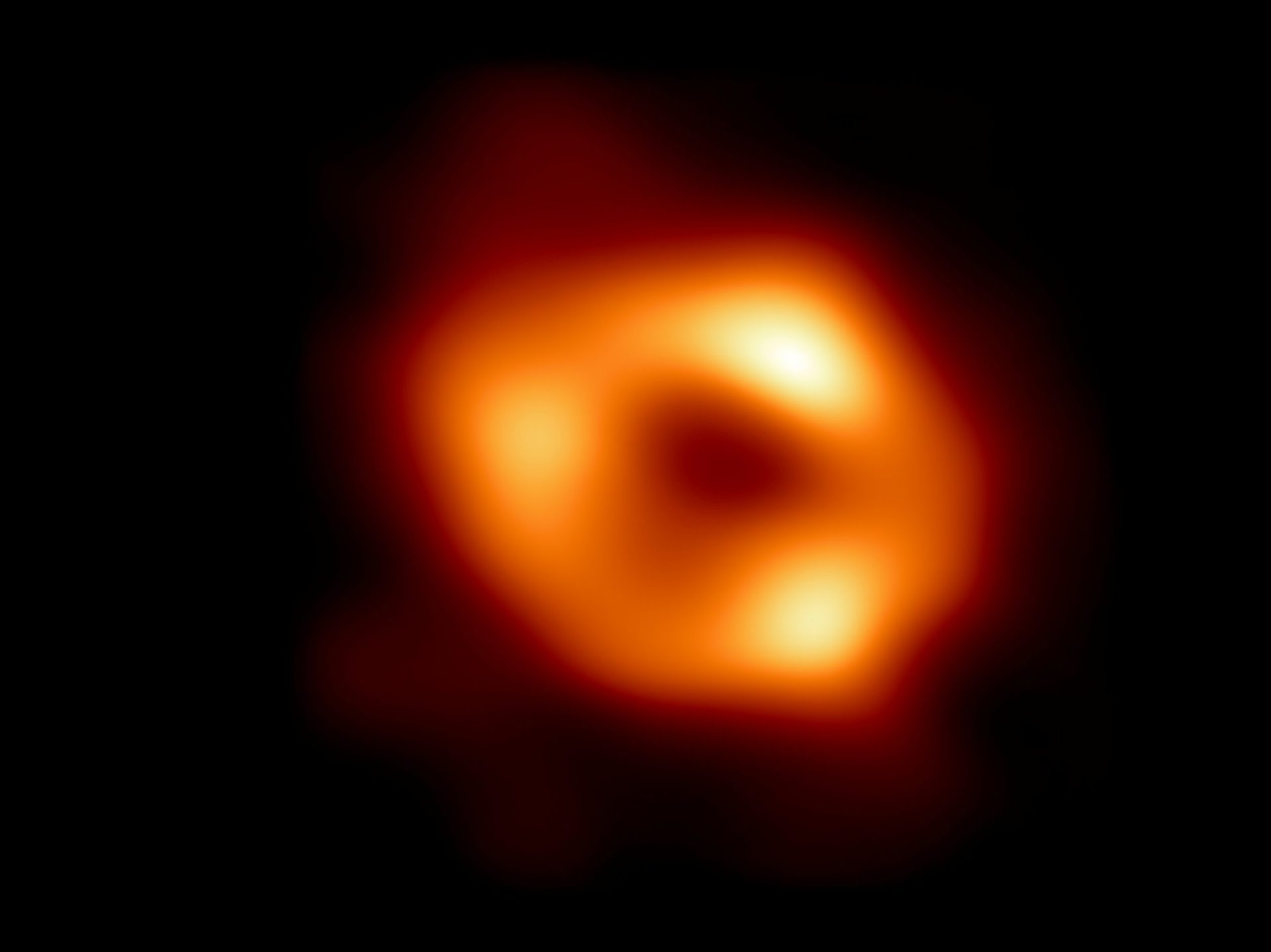 Scientists on Thursday provided the first look at what they called the "gentle giant" lurking at the centre of our Milky Way galaxy.


Researchers said on Thursday they planted seeds of a diminutive flowering weed called Arabidopsis thaliana in 12 small thimble-sized containers each bearing a gram of moon soil, more properly called lunar regolith, and watched as they sprouted and grew. Lunar regolith, with its sharp particles and lack of organic material, differs greatly from Earth soil, so it was unknown whether seeds would germinate.

“When we first saw that abundance of green sprouts cast over all of the samples, it took our breath away,” said horticultural sciences professor Anna-Lisa Paul, director of the University of Florida Interdisciplinary Center for Biotechnology Research and co-leader of the study published in the journal Communications Biology.


“Plants can grow in lunar regolith. That one simple statement is huge and opens the door to future exploration using resources in place on the moon and likely Mars,” Paul said.

The regolith seeds, perhaps unsurprisingly, did less well than the comparison plants. They were slower to grow and generally littler, had more stunted roots and were more apt to exhibit stress-related traits such as smaller leaves and deep reddish black colouration not typical of healthy growth. They also showed gene activity indicative of stress, similar to plant reactions to salt, metal and oxidation.


“Even though plants could grow in the regolith, they had to work hard metabolically to do so,” Paul said.

To the researchers, the fact that they grew at all was remarkable. Study co-leader Rob Ferl, a University of Florida assistant vice president for research, said he felt “joy at watching life do something that had never been done before.”

Arabidopsis, also called thale cress, is widely used in scientific research, including previous experiments in orbit, owing to its speedy life cycle and a deep understanding of its genetics.


NASA made available 12 grams – just a few teaspoons — of regolith collected during the Apollo 11, Apollo 12 and Apollo 17 missions. The researchers planted three or four seeds in a dozen containers moistened with a nutrient solution, then placed them in a laboratory at about 23 degree Celcius under LED lights giving off a pink hue.

The seeds sprouted within three days. After about a week of growth, the researchers removed all but one plant from each container. The one was left to grow until it was 20 days old, with its leaves then harvested to assess gene activity.

The researchers also determined that regolith that had experienced longer exposure to cosmic rays and solar wind on the lunar surface was less hospitable to growth.

Earth plants could help people establish outposts in places like the moon and Mars, as depicted in the 2015 film “The Martian” when an astronaut grew potatoes on the Red Planet. NASA’s Artemis program envisions people returning to the moon’s surface in the coming years.

“Plants are deeply embedded in the science of space exploration because of their life-support role, especially when we consider leaving the Earth for extended periods of time,” Ferl said. 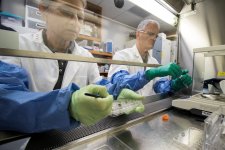 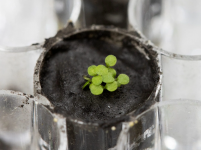 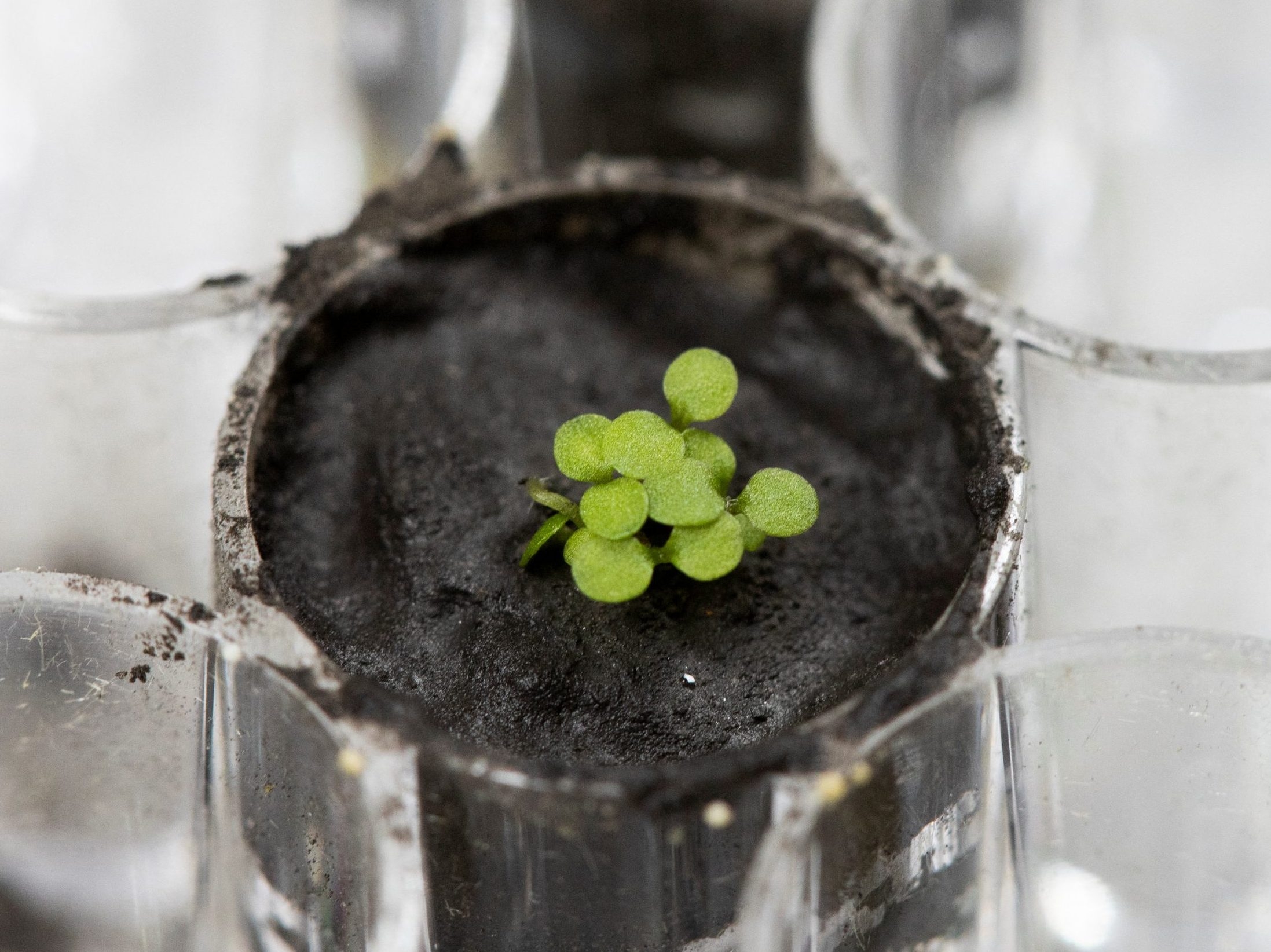 Researchers said on Thursday they planted seeds in containers each bearing a gram of moon soil, and watched as they sprouted.

On an unrelated note, the scientists have disappeared and all that can be heard from the lab is "Feed Me Semour".
Reactions: taxslave and petros

It's not soil, it's a substrate aka dirt.
You must log in or register to reply here.
Top Bottom