Looking at the history of countries that have gone full socialist, it's not very pretty. Socialism has failed in every country that's tried it. Let's look at a few of them.

Socialism is guilty of a fatal conceit: It believes its system can make better decisions for the people than they can for themselves.

Socialism has failed in every country in which it has been tried.

Socialists are fond of saying that socialism has never failed because it has never been tried. But in truth, socialism has failed in every country in which it has been tried, from the Soviet Union beginning a century ago to three modern countries that tried but ultimately rejected socialism—Israel, India, and the United Kingdom.


While there were major political differences between the totalitarian rule of the Soviets and the democratic politics of Israel, India, and the U.K., all three of the latter countries adhered to socialist principles, nationalizing their major industries and placing economic decision-making in the hands of the government.


The Soviet failure has been well documented by historians. In 1985, General Secretary Mikhail Gorbachev took command of a bankrupt disintegrating empire. After 70 years of Marxism, Soviet farms were unable to feed the people, factories failed to meet their quotas, people lined up for blocks in Moscow and other cities to buy bread and other necessities, and a war in Afghanistan dragged on with no end in sight of the body bags of young Soviet soldiers.

The economies of the Communist nations behind the Iron Curtain were similarly enfeebled because they functioned in large measure as colonies of the Soviet Union. With no incentives to compete or modernize, the industrial sector of Eastern and Central Europe became a monument to bureaucratic inefficiency and waste, a “museum of the early industrial age.” As the New York Times pointed out at the time, Singapore, an Asian city-state of only 2 million people, exported 20 percent more machinery to the West in 1987 than all of Eastern Europe.


And yet, socialism still beguiled leading intellectuals and politicians of the West. They could not resist its siren song, of a world without strife because it was a world without private property. They were convinced that a bureaucracy could make more-informed decisions about the welfare of a people than the people themselves could. They believed, with John Maynard Keynes, that “the state is wise and the market is stupid.”

Israel, India, and the United Kingdom all adopted socialism as an economic model following World War II. The preamble to India’s constitution, for example, begins, “We, the People of India, having solemnly resolved to constitute India into a Sovereign Socialist Secular Democratic Republic . . .” The original settlers of Israel were East European Jews of the Left who sought and built a socialist society. As soon as the guns of World War II fell silent, Britain’s Labour Party nationalized every major industry and acceded to every socialist demand of the unions.


At first, socialism seemed to work in these vastly dissimilar countries. For the first two decades of its existence, Israel’s economy grew at an annual rate of more than 10 percent, leading many to term Israel an “economic miracle.” The average GDP growth rate of India from its founding in 1947 into the 1970s was 3.5 percent, placing India among the more prosperous developing nations. GDP growth in Great Britain averaged 3 percent from 1950 to 1965, along with a 40 percent rise in average real wages, enabling Britain to become one of the world’s more affluent countries.


But the government planners were unable to keep pace with increasing population and overseas competition. After decades of ever declining economic growth and ever rising unemployment, all three countries abandoned socialism and turned toward capitalism and the free market. The resulting prosperity in Israel, India, and the U.K. vindicated free-marketers who had predicted that socialism would inevitably fail to deliver the goods. As British prime minister Margaret Thatcher observed, “the problem with socialism is that you eventually run out of other people’s money.” That's because ultimately, reality catches up to the ideological fantasy.

I think one can add Vietnam and China to the list, by opening their economies to foreign investment they were able to keep socialism/communism in place

Twin_Moose said:
I think one can add Vietnam and China to the list, by opening their economies to foreign investment they were able to keep socialism/communism in place
Click to expand...

They have done a rapid change of face to fascism.
Reactions: taxslave and Twin_Moose 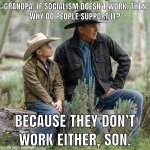 Reactions: taxslave, DaSleeper, Decapoda and 3 others

petros said:
They have done a rapid change of face to fascism.
Click to expand...

Meh, when it comes to the average citizen there's no real difference between communism and fascism. They're just two lumps of shit on the same manure pile.
Reactions: taxslave and Twin_Moose 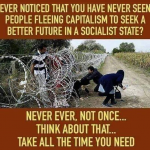 Reactions: taxslave, Twin_Moose, DaSleeper and 2 others

For our Socialized Healthcare, our free schools and colleges, our wonderful social net of Social Services . 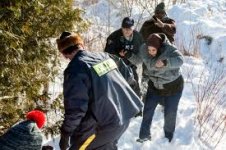 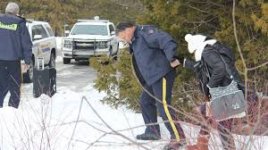 For our Socialized Healthcare, our free schools and colleges, our wonderful social net of Social Services .

You do understand the difference between having social systems and being full on socialist, right?
Reactions: taxslave and Twin_Moose

Jinentonix said:
You do understand the difference between having social systems and being full on socialist, right?
Click to expand...

At the bottom of the article it lists Canada and others having socialist policies enacted in Gov.

Which we already knew

Twin_Moose said:
At the bottom of the article it lists Canada and others having socialist policies enacted in Gov.

Right, which is why I said there's a difference between having a social system and being full-on socialist. However, that's not to say that Prince Groper isn't dragging us into some socialist dystopia. We KNOW that Pierre was a card carrying communist and so's his half-wit, brain dead, demon spawn offspring.
Reactions: taxslave and Twin_Moose
You must log in or register to reply here.
Top Bottom