Virus cases are surging in China, but authorities opt to suspend vaccinations there. That’s as questions rise over the efficacy of Chinese-made vaccines. Short incubation period, rapid transmission, and a high viral load. One expert explains the traits he’s most concerned about, of the virus variant spreading in a Southern Chinese city. A rare clash between students and police strikes multiple Chinese universities. To their surprise, the demonstration proved effective. Apple aims to increase privacy for iPhone users. But not in China. The move marks Apple’s latest compromise in order to maintain its services in China. And the White House launches a task force to boost domestic supply chains. The effort to increase U.S. production seeks to make the country more competitive against China. 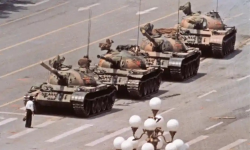