Fossils dated to the humid Late Cretaceous period – almost 100 million years ago – suggest that the Jakapil kaniukura walked on two feet, unlike most other dinosaurs in its family. The plant-eating creature had armored plates to protect it from predators and weighed about as much as a Boston terrier, according to research published last week in the journal Scientific Reports.

The jakapil discovery sheds light on a previously unknown lineage of dinosaurs from the thyreophora family, which includes the much larger stegosaurus, in the Southern Hemisphere.

“For Argentines, Jakapil completes, in a vast succession of discoveries, the missing letter for our dinosaur alphabet, and we can, for the first time, show an alphabet of dinosaurs that lived in Argentina,” researcher Sebastián Apesteguía said in a statement.


The jakapil’s name comes from the crest on the lower part of the dinosaur’s jaw, the function of which is unknown. “Kaniukura” means “crest of stone” in the language of the Indigenous Mapuche people, the researchers said.

The jakapil’s teeth were also unusual. While most herbivorous dinosaurs had leaf-shaped teeth that were similar on both jaws, the newly discovered dinosaur’s teeth were shaped differently on each jaw. Its teeth also appear worn down, which the researchers said indicates that it processed food more efficiently than other members of its family.

The path to reconstructing the dinosaur’s body began in 2012, when Apesteguía toured La Buitrera Paleontological Area – where other dinosaurs have been discovered – and found two small bones that he could not identify. Two years later, he and other scientists found a skeleton with unusual teeth and a block-like jaw.


A researcher recognized the fossil as a type of armored dinosaur and continued collecting bones until 2020, when they finished rebuilding the structure of the species. The desert region is uninhabitable for many species, so it tends to have fossils of few animals, Apesteguía said in the statement.

“Jakapil is a small and very rare dinosaur, and, obviously, he liked to travel through desert environments,” Apesteguía said.

The scientists shared a video reconstruction of the species on Twitter. In it, two jakapils trod along a desert landscape, stretch upward and emit soft guttural growls.

Dinosaur discoveries are somewhat common; paleontologists identify dozens of species every year. In 2021, Australian scientists announced the discovery of a dinosaur the size of a basketball court.

But many dinosaurs would not have been fossilized, which means that we will almost certainly never discover all the kinds that existed, Gizmodo reported. The fact that a dinosaur needs to have died in just the right circumstances for its remains to be findable makes every discovery a notable event. 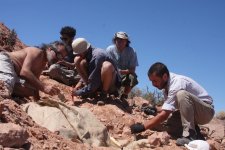 We should totally "jurrasic park" that and bring them back. Basically it's as close to a ninja turtle as we're going to get. It'd sell like hotcakes.
You must log in or register to reply here.
Top Bottom