Inside Trump's Air Force One: 'It's like being held captive'

CNN writes this stuff like it's a combination of comedy and tragedy. Good for a laugh.
https://www.cnn.com/2019/05/24/politics/donald-trump-air-force-one-travel-foreign-trips/index.html
Washington (CNN)President Donald Trump's departure for Tokyo on Friday kicks off a summer of global jet-setting that takes him to five separate countries -- and confines him to the presidential aircraft for more than 80 hours flying overseas.


Not always an eager traveler, Trump has complained in the past about the pace of his foreign travel or the accommodations arranged for him abroad. It's his aides, however, who sometimes dread boarding Air Force One for a lengthy flight overseas, knowing full well the boss will make little use of the bed wedged into the nose of the plane.


"It's like being held captive," one official said of traveling with the President on Air Force One. 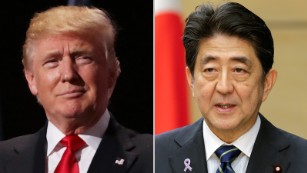 Current and former officials have described White House trips as grueling endeavors accompanied by long hours, but several privately said the flights overseas are easily the worst. The duration can stretch nearly 20 hours. Sleeping space is limited. The televisions are streaming Fox News constantly. And if the headlines flashing across the bottom of the screen are unfavorable to their boss, aides know it's time to buckle up for a turbulent ride.


The President boards Air Force One Friday for the 14-hour flight to Tokyo, and his staff is gearing up for a particularly hellish ride. An event the previous day was supposed to focus on relief for farmers who have been hurt by tariffs, but it quickly devolved into a venting session for Trump, who called the Democratic House speaker "crazy" and said Democrats were trying to inflict a "thousand stabs" on him.


"Keep stabbing," he said in the Roosevelt Room, while surrounded by farmers in cowboy hats.


This account is based on interviews with five current and former officials who have traveled with the President on Air Force One. Trump is expected to notch 36,000 miles of travel this summer, including two trips each to Japan and Europe.

This from a moron who believes Obama was born in Kenya.

Tecumsehsbones said:
This from a moron who believes Obama was born in Kenya.
Click to expand...

I suggest we shove Walter on AF1 and see how he handles the trip with the Orange One.

So we have to shove you off the plane to make room for one more?

I'm sure Tec would be into that. When it comes to parachutes, I bet he is conservative.


I hope you don't use them for your financial information.
Last edited: May 25, 2019

Tecumsehsbones said:
This from a moron who believes Obama was born in Kenya.
Click to expand...

Oh, that old Sydney Blumenthol "get Hitlary selected" rumor is live again?
Last edited: May 25, 2019
You must log in or register to reply here.
Top Bottom