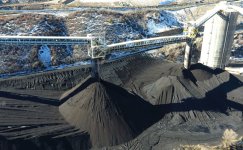 TransAlta Corp. says it will end mining operations at its Highvale coal mine by the end of 2021 and will stop using coal to power its generators in Canada effective Jan. 1, 2022.

Located Wabamun, Alta, about 70 kilometres west of Edmonton, Highvale Mine is one of three TransAlta-owned surface coal mines.

According to the company website, it is Canada's largest surface strip coal mine and covers more than 12,600 hectares. The mine has been in operation since 1970.

TransAlta chief executive Dawn Farrell said the closing will come four years ahead of its original off-coal schedule for the mine.

The company said its Keephills Unit 1 and Sundance Unit 4 will stop using coal and will only operate on gas.

They are unbelievably huge mines

Fine by me, we'll need it again soon.

Graphene is our future, we'll need the coal for other things.
Reactions: Twin_Moose
You must log in or register to reply here.
Top Bottom