From worm-charming to bun-throwing... the age-old traditions Britons can't wait to restart in 2021

Bizarre Britain: From worm-charming to bun-throwing... the age-old traditions Britons can't wait to restart in 2021​ 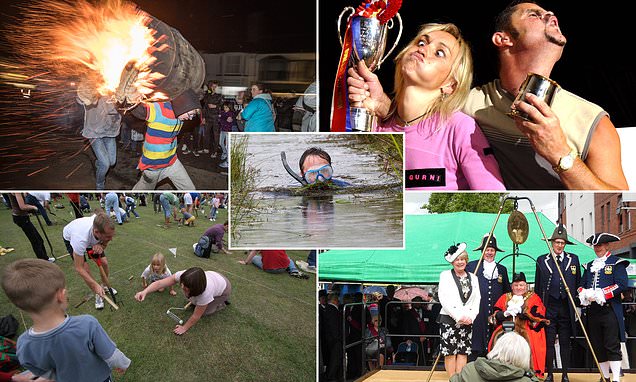 From worm-charming to bun-throwing bouts - it may be nearly 2021 but Britain's historic traditions remain as important as ever. More than 10,000 Britons usually take part in eccentric festivals and competitions every year - with up to 60 events across 35 counties. Covid-19 may have brought a temporary halt to many but here we take a look at some of the weirdest traditions from yesteryear that will hopefully bounce back in 2021. Pictured: Tar Barrel Festival (top left), Worm Charming (bottom left), World Gurning Championships (top right), Weighing the Mayor (bottom right) and Bog Snorkelling (centre).

Worm charming? Is that Brit for "sugaring a churro"?
Reactions: B00Mer

The rules are simple: Competitors are each allotted a 3 x 3-metre plot and given thirty minutes to charm the slimy creatures topside.

No worms are hurt during the Championships and are given their freedom after the event.

Can ya use high amp DC?

petros said:
Can ya use high amp DC?
Click to expand...

That wouldn't be the British way. Tapping the ground with pitchforks suffices.

The Oxfordshire town of Abingdon has a unique tradition of throwing buns from the Oxfordshire County Hall roof on royal and special occasions, this one being to commemorate the Centenary of the end of World War I.

Blackleaf said:
That wouldn't be the British way. Tapping the ground with pitchforks suffices.
Click to expand... 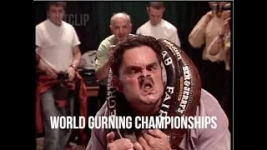 The World Gurning Championships have been taking place at the Egremont Crab Fair in Cumbria since the 1200s, and other traditional sports taking place include pipe smoking and pony leaping! 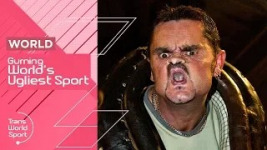 The Gurning World Championships, or the world's ugliest sport, is a traditional competition held in Egremont, Cumbria, where competitors pull the ugliest face possible in order to win! We hang out with Tommy Mattinson, multiple world champion. 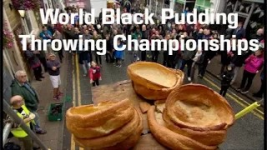 Legend has it that the contest, held in Ramsbottom, Greater Manchester (Ramsbottom was in Lancashire prior to 1974), celebrates the ancient rivalry that exists between Lancashire (red rose) and Yorkshire (white rose), utilising the food from each of these counties (black pudding from Lancashire, and Yorkshire pudding).

The black puddings weigh around three kilograms and their Yorkshire pudding targets sit 20 feet high on a plinth. Each contestant has three throws. Whoever can dislodge the most Yorkshire puddings is the winner.

After several hours of fierce competition, four competitors each scoring 3 points were tied in first place before 45-year-old Nick Pennel made his throw before the 4pm deadline. 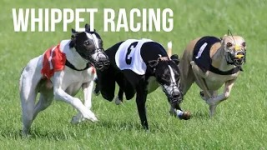 They may sound ferocious, but whippets are in fact lovable pets who also have an amazing ability to sprint a high speed. This makes them perfect for racing.

Each pedigree dog is weighed for its race handicap.

Pedigree whippet racing started after the Second World War and became popular in the late 1960s when most modern clubs were established.

The race track is over 150 yards straight, with modern electrically sprung traps. The lure is a piece of plastic with trailing rags which is taken to the start at the beginning of each race by a motorbike rider. 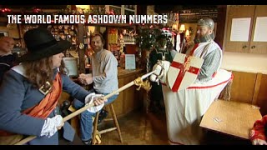 The World Famous Ashdown Mummers are a group dedicated to the performance of a traditional Sussex Mumming Ritual.

They tour hostelries in the Ashdown Forest of Sussex at Christmas time with their traditional Sussex Play. Their characters include Father Christmas, a Doctor, St George, the Turkish Knight, and various shady characters including Beelzebub. 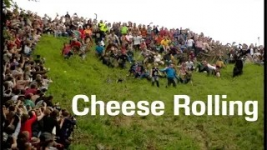 The Cheese Rolling at Cooper’s Hill in Gloucestershire is one of the most spectacular and hazardous of rural English customs. It takes place at high noon on an extremely steep hill (45 degrees) and is open to all. It involves competitors hurling themselves 200 metres down this hill in pursuit of the cheese.

Nobody really knows the actual origins of the Cheese Rolling competition held annually in the Cotswold Hills in South West England. It is thought to be part of an old fertility rite but, whatever the beginnings, it is a tradition that certainly attracts a large crowd of spectators. The cheese weighs approximately 9lbs (4kg) and can achieve a speed in excess of 40 miles per hour (65 km/h).

On several occasions in the past, the cheeses have veered off into the crowd and caused numerous injuries. The winner of the chase gets to keep the prize of a seven to eight-pound Double Gloucester cheese. On the count of three, the first cheese is rolled, and on “four” the competitors launch themselves in pursuit. Inevitably, the wheel-shaped cheese reaches the bottom before it is seized, so the winner is the one to arrive immediately afterwards.

Traditionally, there are 4 pieces of cheese rolled, which have been donated and one is specifically for the girls. The cheeses are, of course, Double Gloucester, as is befitting of the area.

A crowd of several thousand turned out to see this year’s spectacle as dozens of competitors hurled themselves down the very steep hill. Gale force winds and torrential rain add spice to what is already one of the most bizarre and perilous sporting challenges in Britain. 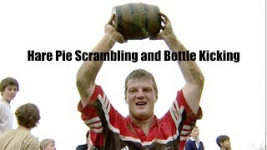 This is an ancient Leicestershire custom with two distinct parts. The first is a charity dole and the second is a mass “ballgame” played with small wooden casks called bottles.

The fun starts with a procession led by the Warrener with his hare-topped staff and his attendants with baskets of bread and the eponymous Hare Pie. The Bottles, be-ribboned,filled with ale and each weighing 5 kg, are carried by three strong players. Once at the church gate, the pie is blessed and distributed to the crowd.

Play is between the villagers of Hallaton and their neighbours from Medbourne and the goals are a mile apart; the bottles are thrown in the air and a fierce contest begins.Injuries are fairly common as the scrum heaves across the fields, over any obstacles including fences and streams in its path. Play can continue after dark and the game is decided by the best of three bottles. There are few rules!