Mr Macron defeated far-right candidate Marine Le Pen by about 65.5% to 34.5% to become, at 39, the country's youngest president, the results show.

Mr Macron will also become the first president from outside the two traditional main parties since the modern republic's foundation in 1958. 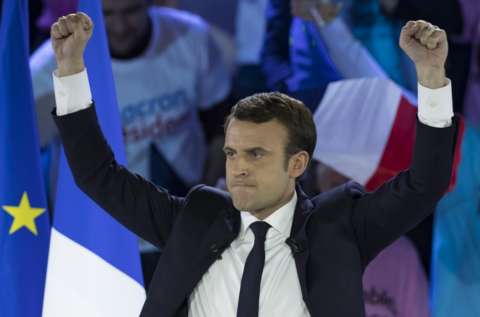 Emmanuel Macron, of the party En Marche!, founded only in 2016, has become France's youngest-ever president, aged 39

Mr Macron defeated far-right candidate Marine Le Pen by about 65.5% to 34.5% to become, at 39, the country's youngest president, the results show.

Mr Macron will also become the first president from outside the two traditional main parties since the modern republic's foundation in 1958.

He said that a "new chapter of hope and confidence is opening".

Mr Macron's supporters gathered to celebrate in central Paris after the bitterly fought election concluded on Sunday amid massive security.

The Macron team said that the new president had had a "cordial" telephone conversation with Ms Le Pen.

In a speech she thanked the 11 million people who had voted for her. She said the election had shown a division between "patriots and globalists" and called for the emergence of a new political force. 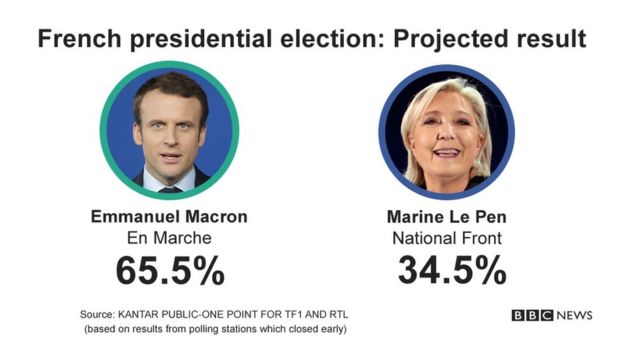 Ms Le Pen said her National Front party needed to renew itself and that she would start the "deep transformation of our movement", vowing to lead it into upcoming parliamentary elections.

She also said she had wished Mr Macron success in tackling the "huge challenges" facing him.

President François Hollande congratulated Mr Macron and said the result showed the French people wanted to unite around the "values of the republic".

The BBC's Hugh Schofield in Paris says this is the most remarkable success story of how a man who three years ago was utterly unknown to the French public, through sheer self-belief, energy - and connections - forged a political movement that has trounced all the established French political parties.

He vowed to ease labour laws and give new protections to the self-employed.

Mr Macron also stood on a pro-EU platform, in stark contrast to his opponent.

What will be his immediate difficulties?

Well, his En Marche! grouping has no seats in parliament at all.

Legislative elections follow on quickly from the presidential poll - on 11 and 18 June.

En Marche! will contest the elections as a party but Mr Macron may find himself needing to pull together a coalition to govern effectively.

Although his presidential candidacy had support from other political parties, much of it stemmed from the need to defeat Ms Le Pen.

He will need to win over the abstainers and those who are sceptical about his political vision. Left-wing voters in particular felt disenfranchised by the choice of the final two candidates.

Mr Macron will also need to tackle the fallout from a hacking attack on Friday, the final day of campaigning, when a trove of documents relating to his campaign, said to include both genuine and fake documents, was released online.

Will his charm work? BBC's Hugh Schofield in Paris 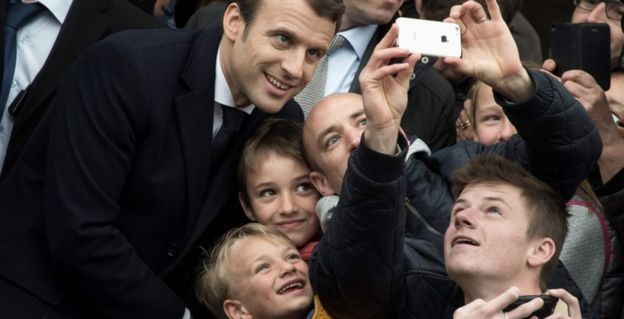 Often with Emmanuel Macron one fears that (in a way that is very French) it is words that are doing his work.

In the campaign it became a joke among journalists how often his answers included the words "au meme temps" (at the same time). It was his way of marrying everything and its opposite, of reconciling every contradiction.

He got away with it because he is who he is.

But in the real life of running a fractious, angry, divided country - will his words have the same effect?

Will his solitary self-belief create the structures of political support which he needs in the rough-and-tumble of government? Will his charm still work?

Macron is the ultimate 'default' candidate. Someone who offered no agenda aside from empty platitudes. He is a true creature of the supranational institutions that formed and sponsored him; banks, global corporations, bureacratic ministries and the École Nationale d'Administration, one the 'Grand Ecoles', from which the French elite are minted to predictable standards of political conformity .

He presented nothing but a somewhat mysterious and amorphous identity, unalligned with established parties and ideologies, but indelibly linked to Europe, Open Borders, Free Trade, Globalism, Monetarism and the Political Establishment.

He is post-nationalist and anti-populist. My guess is he'll be on his backfoot, and off balance from the get go. He'll be unable to forge alliances with a deeply antagonistic and divided electorate and will be faced with defending a fragmenting consensus and collapsing economy. He has no firm electoral franchise from which to work. He lacks imagination, integrity, vision, character and independence.

It was an opportunistic candidacy. A speculative gambit with little substance, considerable marketing savvy and shallow roots. And i think it'll likely start to fall apart with the French Parliamentary Elections in June, when everyone will return to their political trenches.

Le Pen did succeed in surpassing 1/3rd of the total, 11 million votes, in one the lowest electoral participation rates in French history. Macron got a total of about 44% of the potential ballots in the country. Disappointing for Le Pen but it is a solid bridgehead. And i think a lesson in reorienting her party primarily to an economic message which will gain some traction.

Macron got his Parliamentary majority yesterday. Less than expected but more than enough to push through a radical disenfranchisement of labour protections and intensifying his plans of EU integration. Only 43% of the electorate turned out to vote, which might indicate some exhaustion and confusion on their part. It's certainly far from a full scale endorsement of his policies.

He'll double down on the the disastrous economic and multicultural liberalism that has robbed France of its industry, its agriculture and its identity. The downward spiral into global chaos will be accelerated within the conspiracy of these New Age political gurus.. Macron, Merkel, Trudeau and assoc... with a growing revolt from the vast majority who are being systematically impoverished and forgotten. Being France i assume the protests will move on to the streets next.

Only fascism can save Europe now.

Why do nationalists care about what happens in other countries?

If you have never heard the phrase "nothing exists in a vacuum", look it up

the wapo should have a good answer or you.

French President Emmanuel Macron criticized for spending over $30,000 on makeup over 3 months
THE ASSOCIATED PRESS
First posted: Friday, August 25, 2017 10:11 AM EDT | Updated: Friday, August 25, 2017 10:29 AM EDT
PARIS — President Emmanuel Macron’s office has confirmed a report that the French leader spent 26,000 euros (US$30,695) on makeup during his first three months in power, and says it’s trying to find a cheaper alternative.
The report in Le Point news magazine prompted harsh criticism of the president from French social media users. It said the cost includes the pay of a freelance makeup artist following Macron during television appearances and trips abroad.
The president’s office confirmed the amount Friday. The report comes at a bad time for Macron, with polls showing his popularity plunging in recent weeks following the announcement of budget cuts and divisive labour reform.
Le Point said Macron’s makeup expenses are lower than those of predecessor Francois Hollande, who paid a full-time employee about 10,000 euros monthly.

MÉLENCHON ON MACRON'S LABOR LAW: "DON'T COUNT US OUT JUST YET!"


Englids subtitles an be enabled in the bottom right on the video by opening the gear/wheel icon.

Macron later said he had not feared for his safety, and that nothing would stop him carrying on with his job.


In a video circulating on social media, Macron reached out his hand to greet a man in a small crowd of onlookers standing behind a metal barrier as he visited a professional training college for the hospitality industry.

The man, who was dressed in a khaki T-shirt, then shouted “Down with Macronia” (“A Bas La Macronie”) and slapped Macron on the left side of his face.

He could also be heard shouting “Montjoie Saint Denis,” the battle cry of the French army when the country was still a monarchy.

Two of Macron’s security detail tackled the man in the T-shirt, and another ushered Macron away. Another video posted on Twitter showed that the president, a few seconds later, returned to the line of onlookers and resumed shaking hands.

The local mayor, Xavier Angeli, told franceinfo radio that Macron urged his security to “leave him, leave him” as the offender was being held to the ground.

Two people were arrested, a police source told Reuters. The identify of the man who slapped Macron, and his motives, were unclear.

The slogan the man shouted has been co-opted in the past few years by royalists and people on the far-right in France, Fiametta Venner, a political scientist who studies French extremists, told broadcaster BFMTV.

Article content
Macron was on a visit to the Drome region to meet restaurateurs and students and talk about returning to a normal life after the COVID-19 pandemic.

It was one of a series of visits he is making, his aides say, to take the nation’s pulse before a presidential election next year. He later continued his visit to the region.


Macron, a former investment banker, is accused by his opponents of being a part of a moneyed elite aloof from the concerns of ordinary citizens.

In part to counter those allegations, he on occasion seeks out close contact with voters in impromptu situations, but this can throw up challenges for his security detail.

Footage at the start of Tuesday’s slapping incident showed Macron jogging over to the barrier where the onlookers were waiting, leaving his security detail struggling to keep up. When the slap happened, two of the security detail were at his side, but two others had only just caught up.

Article content
In an interview with the Dauphine Libere newspaper after the attack, Macron said: “You cannot have violence, or hate, either in speech or actions. Otherwise, it’s democracy itself that is threatened.”

“Let us not allow isolated events, ultraviolent individuals… to take over the public debate: they don’t deserve it.”

Macron said he had not feared for his safety, and had continued shaking hands with members of the public after he was struck. “I kept going, and I will keep going. Nothing will stop me,” he said.

In 2016, Macron, who was economy minister at the time, was pelted with eggs by hard-left trade unionists during a strike against labour reforms. Macron described that incident as “par for the course” and said it would not curb his determination.

PARIS — A man slapped President Emmanuel Macron in the face on Tuesday during a walkabout in southern France.