Can the Failure stop England this time around?

We've played 13 minutes so far and I don't think Italy have had a touch of the ball for about 9 minutes. 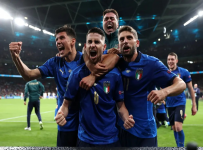 Italy beat Spain on penalties to reach the Euro 2020 final after an enthralling semi-final at a noisy Wembley.

After Alvaro Morata's penalty was saved, Jorginho strolled up to score and set up a final with either England or Denmark in London on Sunday.

Federico Chiesa looked as if he had sent Italy - who are unbeaten in 33 games - to the final in normal time with a delightful curled finish to cap off a quick counter.

But Morata stepped off the bench to slot an equaliser with 10 minutes to go after a one-two with Dani Olmo.

However, the Juventus forward's penalty miss in the shootout proved costly as Spain lost a semi-final for the first time in their history.

Fears about an empty stadium or quiet crowd proved unfounded despite tickets still being on sale during the day, and with fans unable to fly from either country without having to quarantine for too long to watch the game.

Roberto Mancini's Italy side have been arguably the best team in the tournament - and had won their previous 13 games - and deserve their place in the final.

However, this was the toughest they have had to work, and they only managed one shot between Morata's equaliser and the shootout.

It is an especially sad end to the tournament for Morata. He has wasted numerous chances during the tournament - with his family having to endure threats from fans - and his equaliser looked set to change the narrative before he failed from the spot. 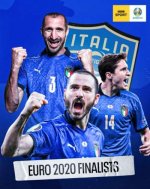 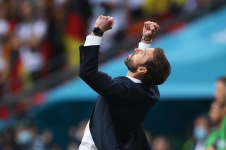 Gareth Southgate has challenged his England players to make history by beating Denmark to reach the European Championship final for the first time.

England are one win away from a first major tournament final since 1966 after reaching the semi-finals of Euro 2020.

They face Denmark in front of a 60,000 crowd at Wembley on Wednesday.

"We don't have as good a football history as we like to believe sometimes," said Southgate. "These players are making massive strides."

The last time England reached a major tournament final was when they lifted the World Cup 55 years ago. They have never got further than the semi-final stage in a European Championship.

However, there is mounting excitement - and hope has turned to expectation - that Southgate's side can finally triumph.

England, who also ended a 55-year wait for a knockout tie victory over Germany with their last-16 success, are the highest-ranked side still left in the tournament. 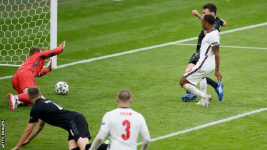 "We've broken down barriers in this tournament and we have another opportunity to do that tomorrow," added Southgate.

"We have never been to a European Championship final so we can be the first England team to do that which is really exciting."

Southgate said knowing the country was behind the team is a "great feeling for us".

Cars and homes are decked out with England flags while pubs have been given permission to stay open an extra 45 minutes until 23:15 BST on Sunday, in case the final at Wembley - which kicks-off at 20:00 - goes to extra time and penalties.

"We are ready for the game, the players are ready, they have got tremendous experience themselves having been in this situation before," added Southgate, who led England to the semi-finals of the 2018 World Cup.

"Our preparations have been calm and we know we are playing a very good opponent. It's going to be a really tight game and an exciting game for everybody."

Southgate is confident his players can handle the pressure against Denmark, who won the European Championship in 1992. 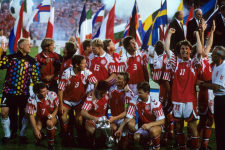 Famously, Denmark won Euro 92 despite failing to qualify for the tournament

"We have had expectation during the whole tournament and I think we dealt with that really well in the opening game, for example, and the game with Germany," he said.

"But we have never been to a final so the pressure is whatever you choose it to be really. It's a motivating thing, a challenge for us.

"If we were a country that had won five titles and had to match what had gone before then I might feel differently. But we're not. Denmark have won it so maybe there is more pressure on them to replicate that."

England supporters have been serenading their team through the tournament with chants of 'Football's Coming Home', the anthem that first became popular when the Three Lions reached the last four of Euro 96.

Asked what it would mean to ruin England's dreams of Euro glory on home soil, Denmark keeper Kasper Schmeichel said: "Has it ever been home? I don't know. Have you ever won it?"

But England captain Harry Kane said the team was in a strong position to put that right.

"He's right in terms it hasn't 'come home' in this competition for us, but we're in a great position in that we are two games away," added Kane.

"It's important our focus is on Wednesday night and is about us and what we can do. We know if we can get it right then it should be enough to get us over the line."

The world rankings of the four Semi-Finalists:

Italy fans celebrate in Rome after their team reached the Final....

So how are things in the covid factory? If the news reports are to be believed you are about to have rounds 3, 4, 5 all at once.

Nice of the boss to let us finish early so we can watch the game. 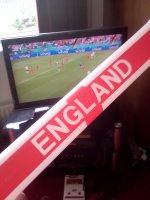 England reach their first Final since 1966 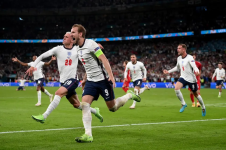 Kane celebrates his winner in the second half of extra time

England's 55-year wait to reach a major final is over at last after victory against Denmark in the Euro 2020 last four, on a night of nerve-shredding tension then unconfined joy at Wembley.

Gareth Southgate's side were on a mission to travel one step further than any England side has done since the 1966 World Cup final win against West Germany and they finally achieved the long-cherished goal as they came from behind to beat Denmark after extra time.

In front of 66,000 fans and in a frenzied, thunderous atmosphere this newer Wembley has not experienced before, England battled their way out of adversity to secure a meeting with Italy in the Euro 2020 final at the same venue on Sunday (20:00 BST kick-off).

How England had to fight for victory against this steely Denmark with an inspired keeper in Kasper Schmeichel, especially after conceding their first goal of the tournament to Mikkel Damsgaard's stunning free-kick after 30 minutes.

Schmeichel was Denmark's hero as England sought the winner, saving brilliantly from Harry Maguire and Harry Kane as the game went into extra time and the prospect of penalties loomed large.

The moment the nation has waited for so long effectively arrived with Wembley's giant screens showing 103 minutes and captain Kane standing over a penalty after Raheem Sterling had been fouled by Joakim Maehle.

In keeping with England's long and tortuous history, it was not straightforward as the normally ice-cool Kane saw an awful penalty saved by Schmeichel - but the rebound fell at his feet for him to score.

Wembley went wild with deafening noise and wild celebrations as finally, after all the years of hurt, England have the golden opportunity to finally claim a major crown on Sunday.

Sir Geoff Hurst, part of the England team that won the World Cup in 1966...

Millions celebrate around England as they see their team beat Denmark to reach their first Final for 55 years...

Beers fly through the air as England fans in Liverpool celebrate as their impressive team score a late winner against Denmark to reach their first Final since 1966...

Heartache for Denmark who played well but ran out of steam in the end against a very strong team... 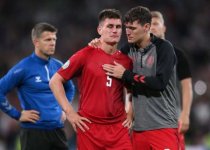 England fans at Wembley sing Neil Diamond's Sweet Caroline - which has become the team's anthem as they have progressed through the tournament - after their Semi-Final victory tonight... 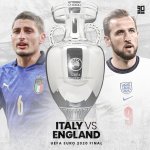 10 men and the free kick seemed to be the pivotal factors. Denmark had a very good tournament.

Good for Italy as well. Their fans are almost like Rider fans with more passion.

Should be a good match.

bob the dog said:
10 men and the free kick seemed to be the pivotal factors. Denmark had a very good tournament.

Good for Italy as well. Their fans are almost like Rider fans with more passion.

It took the first direct free kick to be scored directly in this tournament for England to finally concede a goal for the first time - and even then it should never have been a free kick at all.
You must log in or register to reply here.
Top Bottom