Canada invokes 1977 treaty with U.S. in bid to halt Line 5 closing - The Globe and Mail 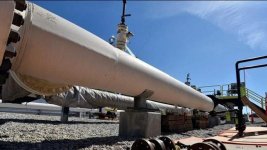 You would think these brains damaged CEO's would build the pipeline through northern ontario and keep assets in Canada..

Fuck those idiots who tried to kidnap Gretchen Whitmer, they sure fucked up

You would think these brains damaged CEO's would build the pipeline through northern ontario and keep assets in Canada..

Fuck those idiots who tried to kidnap Gretchen Whitmer, they sure fucked up
Click to expand...

The cost is tremendous to go through the Canadian shield for 5% of production, Enbridge's biggest customer is the US with it's hub in Superior it just made sense to shoot up to Sarnia from there.

A little more perspective for you the original line that went to Superior Wisconsin and Line 5 was built by Imperial Oil, then bought out by IPL which did the majority of expansion before being sold to Enbridge.

Whitmer squares off against Canadian government in pipeline dispute​

The Canadian government have invoked a 1977 pipeline treaty to inaugurate formal negotiations with the U.S. government.

It didn’t take long for Michigan Gov. Gretchen Whitmer to fire back at the Canadian government’s invocation of a 1977 pipeline treaty to inaugurate formal negotiations with the U.S. government over Whitmer’s attempt to shutter a portion of the Line 5 pipeline under the Straits of Mackinac.

“I am profoundly disappointed that today the Government of Canada chose to invoke Article IX of the 1977 Transit Pipelines Treaty in a bid to help Enbridge, a private oil company, keep crude oil running indefinitely through Michigan’s Straits of Mackinac,” Whitmer said in a statement released Monday afternoon. “So long as oil is flowing through the pipelines, there is a very real threat of a catastrophic oil spill in the Great Lakes.

"I have made clear to Enbridge that it cannot use our state-owned lakebed for these pipelines, but Enbridge has refused to stop," she added. "Moreover, rather than taking steps to diversify energy supply and ensure resilience, Canada has channeled its efforts into defending an oil company with an abysmal environmental track record.”

The letter from the Canadian government was sent in response to the Whitmer’s attempts to shutdown the Enbridge Line 5 dual pipelines, which have been operable for the past 68 years and transport up to 540,000 gallons of hydrocarbon fuels each day. In the letter, sent to the U.S. District Court for the Western District of Michigan, the Canadian government invoked Article IX of the treaty to open international negotiations, effectively putting on hold efforts by the Whitmer administration to close the five-mile portion of underwater pipeline and bringing the U.S. federal government to the negotiating table.

Monday’s move by the Canadian government brings several new variables to the ongoing brinkmanship between Enbridge and the Whitmer administration. For one, Jennifer Granholm, the secretary of the U.S. Department of Energy, is herself a former Michigan governor and was once a Canadian resident, and she has expressed repeatedly her support of pipelines as a safe, effective means to transport hydrocarbon-based fuels.

“The letter from the Canadian Government, revisiting the rights and responsibilities outlined in the 1977 treaty, appears to be the next logical step in the legal battle over who has jurisdiction over Line 5, given the broad impacts closure would have on Alberta, Ontario, and Quebec,” Jason Hayes, director of environmental policy at the Mackinac Center for Public Policy, told The Center Square. “This is especially true when we consider that, 1) the Canadian Minister of Natural Resources, Seamus O’Reagan had stated the pipeline’s closure is ‘non-negotiable;’ 2) The Biden Administration has essentially abdicated any role in addressing the legal conflict and the potential harms the closure will inflict on its most trusted trading partner; and 3) The Whitmer administration has steadfastly refused to consider any other options but immediate closure,” he said.

“As with any legal gambit, however, the next steps remain in the hands of the courts,” Hayes continued. “We are once again waiting to see if Federal Judge Janet Neff believes the 1977 treaty plays a role in her decision. She could still rule on this if she doesn’t believe the treaty constrains her.”

Hayes continued, noting closure of the underwater segment of Line 5 would have significant economic impacts on Canada but, as well, much of the Midwest. He cited a study released by the Consumer Energy Alliance this past summer, which concluded total economic losses of closing Line 5 could reach $20.8 billion in lost economic activity in Michigan, Ohio, Indiana and Pennsylvania.

Additionally, Hayes said, the four states could be on the hook for a combined $8.3 billion reduction in combined Gross State Product; $2.36 billion in lost labor earnings in salaries, wages and benefits; 33,755 lost jobs; and a $265.7 million reduction in annual state tax revenues.

In an email to The Center Square, Michigan Chamber of Commerce President & CEO Richard Studley took issue with the Whitmer administration’s actions to close Line 5.

“The Commerce Clause of the U.S. Constitution clearly provides that Congress (not individual state actors) shall have the power to regulate interstate and foreign commerce,” Studley wrote. “Line 5 is an interstate & international pipeline that safely delivers essential energy every day to millions of homeowners & businesses in Michigan, other Great Lakes states and our friends & neighbors in Canada,” he said.

Studley continued, calling “reckless” campaign promises to close Line 5 without proposing any reasonable alternatives made three years ago by both Whitmer and subsequent Michigan Attorney General Dana Nessel. He added Nessel and Whitmer refused to participate in a good-faith effort to resolve differences with Enbridge through court ordered mediation.

Studley noted Enbridge has reaffirmed its commitment during months of mediation with the state of Michigan to invest $500 million of the company’s own money to build an underground tunnel across the Straits, which would replace the pipelines currently traversing the lakebed.

“Sadly, Dana Nessel and Gretchen Whitmer responded by issuing more threats & ultimatums to shutdown Line 5 immediately,” Studley wrote. “Inexplicably, Gov. Whitmer also seems to have gone out of her way to trigger an unnecessary conflict with our friends and neighbors in Canada on the same day Pres. Biden is in Michigan. Michigan deserves better from our Governor.”
Reactions: taxslave and Ron in Regina

We should stop the flow of oil to ontariOWE until turdOWE drops the carbon scam tax.
Reactions: Twin_Moose and B00Mer

taxslave said:
We should stop the flow of oil to ontariOWE until turdOWE drops the carbon scam tax.
Click to expand...

How ? Sounds easy , however a private company has contractual commitments .
Reactions: Twin_Moose
You must log in or register to reply here.
Top Bottom