Britain and America are marking the 25th anniversary of the Lockerbie bombing.

The Lockerbie bombing of 21st December 1988 is Britain's worst ever terrorist attack. Pan Am flight 103 from London to New York was destroyed by a bomb over the small town of Lockerbie in southern Scotland killing 270 people. All 243 passengers and 16 crew were killed as well as 11 people on the ground.

The wing section hit 13 Sherwood Crescent at more than 500 mph and exploded, creating a crater 154 ft long and with a volume of 730 cu yd. The house was completely destroyed, and its occupants, Dora and Maurice Henry, were killed.

Several other houses and their foundations were completely destroyed, and 21 others were damaged so badly they had to be demolished. Four members of one family, Jack and Rosalind Somerville and their children Paul, 13, and Lyndsey, 10, died when their house at 15 Sherwood Crescent exploded.

Kathleen Flannigan, 41, her husband Thomas, 44, and their daughter Joanne, 10, were killed by the explosion in their house at 16 Sherwood Crescent. Their son Steven, 14, saw the fireball engulf his home from a neighbour's garage, where he had gone to repair his sister's bicycle. Their oldest son, David, was living in Blackpool at the time. David died in 1993 and Steven in 2000.

The fireball rose above the houses and moved toward the nearby Glasgow–Carlisle A74 dual carriageway, scorching cars in the southbound lanes and leading motorists and local residents to believe that there had been a meltdown at the nearby Chapelcross nuclear power station. Father Patrick Keegans, Lockerbie's Roman Catholic priest, was preparing to visit his neighbours Dora and Maurice Henry at approximately 7 pm that evening, when the plane destroyed their home; there was nothing left of their bodies to bury. Keegans' house at 1 Sherwood Crescent was the only one that was neither destroyed by the impact nor gutted by fire.

A wreath-laying and church service will be held today in Lockerbie.

Events will also take place today in London and near Washington DC.

Among the gatherings marking the anniversary of Britain's worst-ever terrorist attack is a remembrance service being staged at Westminster Abbey in London.

In the US, a ceremony will take place at the memorial cairn in Arlington National Cemetery, near Washington DC.

The Lockerbie bombing remains the deadliest act of terrorism ever committed in the UK and until the attacks of 9/11 it was also responsible for the biggest single loss of American lives in such an attack.

Of the 270 people killed, 178 were American and 31 were British. Four Hungarians, three Irish, three Indians, three Canadians and three West Germans were killed, as well as people from 14 other countries.

It emerged on Friday that the family of Lockerbie bomber Abdelbaset Al-Megrahi want to appeal against his conviction.

Just a few days after the Lockerbie bombing, I was a small boy being taken by my parents to see my grandfather in Scotland and we saw the wreckage of Pan Am 103 still lying in a field at the side of the motorway.

Memorial services are to be held in the UK and the US to mark the 25th anniversary of the Lockerbie bombing in which 270 people were killed.

A wreath-laying and church service will be held in the south of Scotland town which was devastated when Pan Am flight 103 was blown from the skies in 1988.

Events will also take place in London and near Washington DC.

It emerged on Friday that the family of Lockerbie bomber Abdelbaset Al-Megrahi want to appeal against his conviction.

Among the gatherings marking the anniversary of Britain's worst-ever terrorist attack is a remembrance service being staged at Westminster Abbey in London.

In the US, a ceremony will take place at the memorial cairn in Arlington National Cemetery, near Washington DC.

The Lockerbie bombing remains the deadliest act of terrorism ever committed in the UK and until the attacks of 9/11 it was also responsible for the biggest single loss of American lives in such an attack.

The Boeing 747 was just over half an hour into its flight from London to New York when it exploded, seconds before 19:03 UK time, on 21 December 1988.

The wing section hit 13 Sherwood Crescent at more than 500 mph and exploded, creating a crater 154 ft long and with a volume of 730 cu yd. The house was completely destroyed, and its occupants, Dora and Maurice Henry, were killed. They were never found.


All 243 passengers and 16 crew died, and a further 11 people were killed in their homes when wreckage hit the ground in Lockerbie.

Canon Patrick Keegans, who was parish priest at Lockerbie at the time of the bombing, said the anniversary had "brought to the surface many, many emotions people have had over the past 25 years".

"Other anniversaries have been calmer. This one makes us remember the devastation and horror that all of us experienced 25 years ago," he told BBC Breakfast.

The majority of the passengers and crew on board the aircraft were US citizens.

In the United States, a service of "hope and remembrance" is planned at the Hendricks Chapel of Syracuse University in New York state, which lost 35 students who had been studying at its London campus. The service will be followed by a procession to its Wall of Remembrance.

A further service will also take place at the university's Lubin House in New York.

Events at the Arlington National Cemetery in Virginia will centre on its Pan Am 103 Memorial Cairn.

It is made of 270 blocks of Scottish sandstone - one for each of the victims of the bombing.

One man, Libyan Abdelbaset al-Megrahi, was convicted of the bombing at a special Scottish court sitting in the Netherlands in 2001. 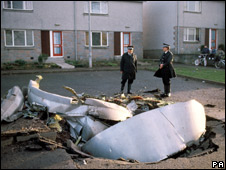 He was released from jail on compassionate grounds in 2009 after he was diagnosed with advanced prostate cancer.

He died at his home in Tripoli last year.

In an interview with the BBC, his family have repeated their intention to pursue an appeal against Megrahi's conviction.

His brother Abdel-Hakim Al-Megrahi said the family "wanted the truth to be revealed".

He also said he was hopeful the Libyan government would help to fund the appeal.

Oliver Miles, a former British ambassador to Libya, said the truth behind the bombing might never be known but "if there was a Libyan mastermind, it was Gaddafi". 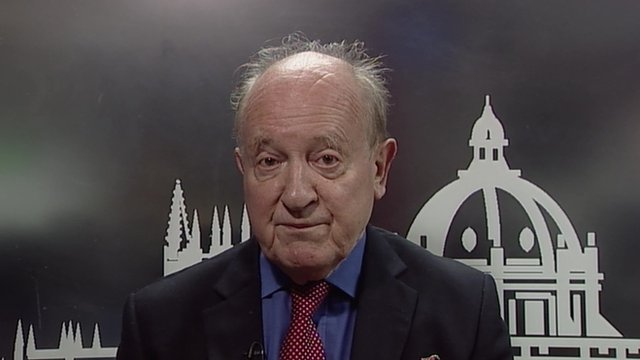 Oliver Miles, former British ambassador to Libya: "I don't think the truth will ever be found"

"It was such a shocking and enormous atrocity that clearly nobody was going to rest until the truth was found," he told BBC Breakfast.

"I don't think the truth possibly ever will be found so perhaps we will be talking about this for years to come."

UK Prime Minister David Cameron paid tribute to the "fortitude and resilience" of those affected by the Lockerbie bombing.

He said: "Over the last quarter of a century much attention has been focused on the perpetrators of the atrocity. Today our thoughts turn to its victims and to those whose lives have been touched and changed by what happened at Lockerbie that night.

"To families, friends, neighbours, loved ones, and all those caught up in the painful process of recovery, let us say to them: our admiration for you is unconditional.

"For the fortitude and resilience you have shown. For your determination never to give up. You have shown that terrorist acts cannot crush the human spirit. That is why terrorism will never prevail."

Scotland's First Minister Alex Salmond, who will be attending the wreath-laying in Lockerbie, said: "On this 25-year anniversary, and as the country prepares once more to relive the harrowing events of that terrible night, it is important that we remember that the pain and suffering of the families and friends of those who died has endured since that winter night in 1988."

Deputy First Minister Nicola Sturgeon will be attending the Westminster Abbey ceremony, as will Secretary of State for Scotland Alistair Carmichael. 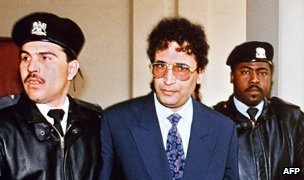 Pan Am flight 103 from London to New York was destroyed by a bomb on 21 December 1988 over Lockerbie, Scotland

All 243 passengers and 16 crew were killed, as well as 11 people on the ground

Prominent among the passenger victims was the 50-year-old UN Commissioner for Namibia, Bernt Carlsson, who would have attended the signing ceremony of the New York Accords at the UN headquarters on 22 December 1988. Also aboard were: Volkswagen America CEO James Fuller and Volkswagen America Marketing Director Lou Marengo, who were returning from a meeting with Volkswagen executives in West Germany; musician Paul Jeffreys and his wife Rachel; poet and former girlfriend of musician Robert Fripp, Joanna Walton, credited with writing most of the lyrics on Fripp's 1979 album Exposure; Jonathan White, the son of actor David White, who played Larry Tate on the American 1960s sitcom Bewitched; Alfred Hill, a promising young physicist.

There were at least four U.S. government officials on the passenger list with rumours, never confirmed, of a fifth on board. The presence of these men on the flight later gave rise to a number of conspiracy theories, in which one or more of them were said to have been targeted.

How many millions have the Brits and Yanks bombed to death over the last 50 years? Oh, but when you do it it is in the name of bringing democracy to the people, not an act of terror. Ya, I'm sure all those dead people really appreciate the gesture.

Abdel Basset al-Megrahi, an intelligence officer who died in 2012, was jailed for life in 2001 for the murder of 243 passengers, 16 crew and 11 residents of the Scottish town of Lockerbie in the deadliest militant attack in British history.


In January, the Court of Criminal Appeal in Scotland rejected an appeal brought by his family, who had argued that there had been a possible misconduct of justice, and their lawyer Aamer Anwar said on Thursday the same court had now refused permission for them to appeal that decision.

“I have now instructed our legal team to seek leave to appeal directly to the UK Supreme Court which is the final court of appeal for my father’s case,” Megrahi’s son Ali said in a statement.

This advertisement has not loaded yet, but your article continues below.
Article content
“I regard my father Abdelbasset Al-Megrahi as the 271st victim of Lockerbie.”


Pan Am Flight 103 was blown up over Lockerbie in December 1988 en route from London to New York, carrying mostly Americans on their way home for Christmas.

Megrahi, who denied involvement in the attack, died in Libya in 2012 after being released three years earlier by the Scottish government on compassionate grounds due to prostate cancer.

Former leader Muammar Gaddafi accepted Libya’s responsibility for the bombing in 2003 and paid compensation to families, but did not admit personally ordering it.

However, Megrahi’s family and some relatives of the Scottish victims have always doubted his guilt and Libya’s responsibility, and say the truth has yet to come out.

I vaguely remember, as a 7-year-old, travelling to visit my grandfather who lived in Paisley near Glasgow just several days after the Lockerbie Bombing and seeing the plane wreckage in the field at the side of the motorway through the window of the car.
You must log in or register to reply here.
Top Bottom