Book: ''' Stephen Hawking. A life in science ''
''Together with Brandon Carter and Jim Bardeen, Hawking wrote a paper,
published in Communications in Mathematical Physics , pointing out . . .
the team commented, '' In fact the effective temperature of a black hole
is absolute zero . . . . No radiation could be emitted from the hole.''
/ page 156./
But later (!) , . . using concepts of entropy and Heisenberg uncertainty
principle and quantum fluctuations (!) Hawking changed his mind
and wrote that black holes can radiate.
/ Book: ''' Stephen Hawking. A life in science '' by Michael White and John Gribbin/
#
So, in the beginning ( according to calculations) the ''black hole''
had absolute zero temperature (like the Cosmic Vacuum: T=0K) . . .
but . . . thanks to entropy, Heisenberg uncertainty principle and
quantum fluctuations the absolute zero temperature was changed.
Conclusion:
Cosmic Vacuum and black holes are one and the same system.
Black holes are parts of the infinite Cosmic Vacuum.

Holy Cow! I think I knew her!! That God I’ve grown up & become more discerning….
Reactions: petros and Dexter Sinister

WTF kind of logic is that socratus? If the cosmic vacuum is at 0K and black holes are not, how can they be the same thing?

3- A black holes will radiate at any temperature above absolute zero,
but at very cold temperatures it is very difficult to detect.

Conclusion:
Black holes are parts of the infinite/eternal Cosmic Vacuum.
The black holes are actually camouflaged the structure of the pure Cosmic Vacuum.
-------
‘'The problem of the exact description ofvacuum, in my opinion, is the basic problem now before physics.
Really, if you can’t correctly describe the vacuum, how it ispossible to expect a correct description
of something more complex?''
/Paul Dirac /
#
Book ''The FermiSolution'''': something seemswrong with our idea of the vacuum.
It is we who abhor a vacuum, who recoil fromthe stillness of the void as from an open grave.''
/Page 37-38, by Hans Christian von Baeyer/
-----
Thermodynamics of the perfect Cosmic Vacuum (aka black holes) is perfectly
in agreement with temperature and laws of Ideal Gas.
=====


Scientists reported Friday that this black hole is 10 times more massive than our sun. And it’s three times closer than the previous record-holder.


It was identified by observing the motion of its companion star, which orbits the black hole at about the same distance as Earth orbits the sun.

El-Badry and his team followed up with the International Gemini Observatory in Hawaii to confirm their findings, which were published in Monthly Notices of the Royal Astronomical Society.

The researchers are uncertain how the system formed in the Milky Way. Named Gaia BH1, it’s located in the constellation Ophiuchus, the serpent-bearer. 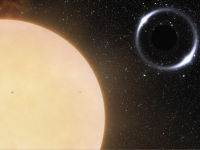 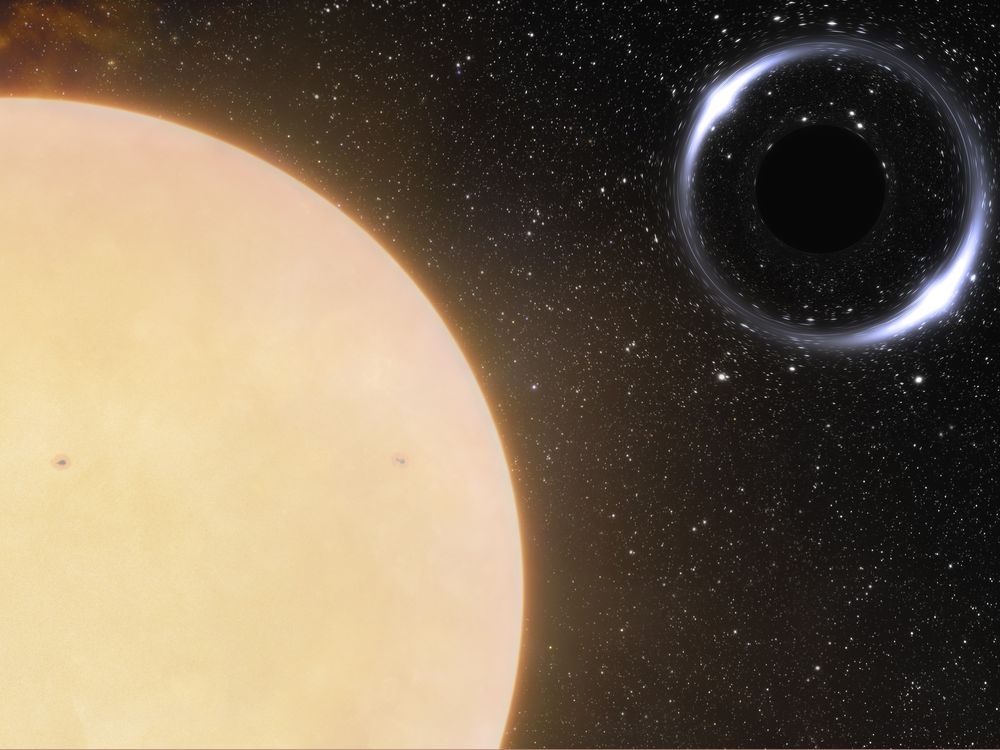 Astronomers have discovered the closest known black hole to Earth, just 1,600 light-years away.


It was one of only four examples – and the first since 2011 – of a black hole observed in the act of tearing apart a passing star in what is called a tidal disruption event and then launching luminous jets of high-energy particles in opposite directions into space, researchers said. And it was both the furthest and brightest such event on record.


Astronomers described the event in studies published on Wednesday in the journals Nature and Nature Astronomy.

The culprit appears to be a supermassive black hole believed to be hundreds of millions of times the mass of our sun located roughly 8.5 billion light years away from Earth. A light year is the distance light travels in a year, 9.5 trillion km.

“We think that the star was similar to our sun, perhaps more massive but of a common kind,” said astronomer Igor Andreoni of the University of Maryland and NASA’s Goddard Space Flight Center, lead author of one of the studies.


The event was detected in February through the Zwicky Transient Facility astronomical survey using a camera attached to a telescope at the Palomar Observatory in California. The distance was calculated using the European Southern Observatory’s Very Large Telescope in Chile.

“When a star dangerously approaches a black hole – no worries, this will not happen to the sun – it is violently ripped apart by the black hole’s gravitational tidal forces -similar to how the moon pulls tides on Earth but with greater strength,” said University of Minnesota astronomer and study co-author Michael Coughlin. (See animation of tidal disruption event)

“Then, pieces of the star are captured into a swiftly spinning disk orbiting the black hole. Finally, the black hole consumes what remains of the doomed star in the disk. In some very rare cases, which we estimated to be 100 times rarer, powerful jets of material are launched in opposite directions when the tidal disruption event occurs,” Coughlin added.


Andreoni and Coughlin said the black hole was likely spinning rapidly, which might help explain how the two powerful jets were launched into space at almost the speed of light.

Massachusetts Institute of Technology astronomer Dheeraj Pasham, lead author of the other study, said the researchers were able to observe the event very early on – within a week of the black hole starting to consume the doomed star.

While researchers detect tidal disruption events about twice per month, ones that produce jets are extremely rare. One of the jets emanating from this black hole seems to be pointing toward Earth, making it appear brighter than if it were heading in another direction – an effect called “Doppler boosting” that is similar to the enhanced sound of a passing police siren.

The supermassive black hole is believed to reside at the centre of a galaxy – much as the Milky Way and most galaxies have one of these at their core. But the tidal disruption event was so bright that it obscured the light of the galaxy’s stars.

“At its peak, the source appeared brighter than 1,000 trillion suns,” Pasham said. 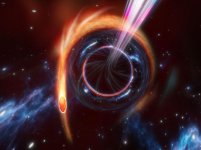 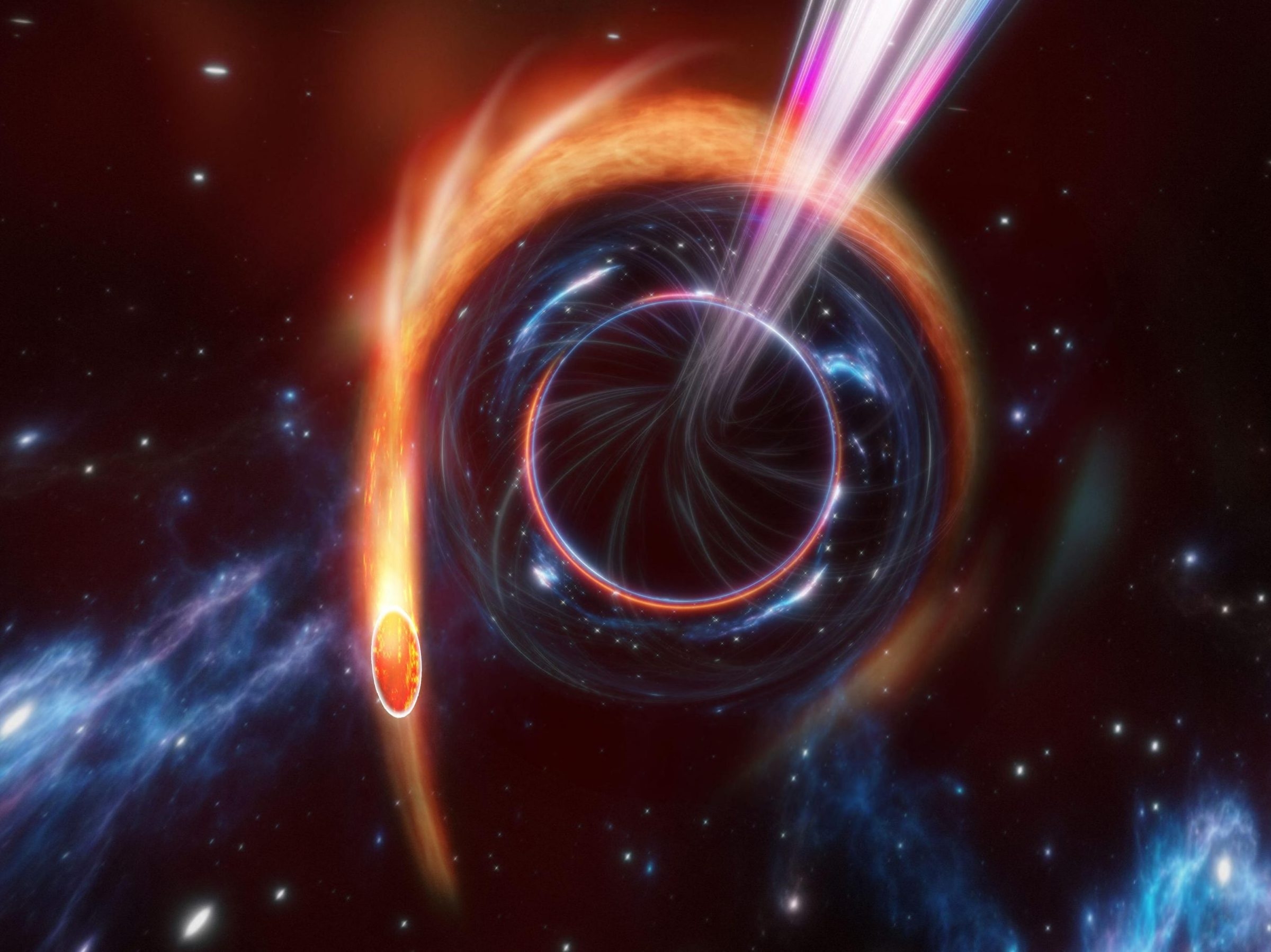 Astronomers have detected an act of extreme violence more than halfway across the known universe as a black hole shreds a star.