Your team is 3-0 up against the African Champions and totally in control in the Last 16 of the World Cup.

No nerves or anxiety or being put through the wringer. Just relaxed and swigging my beer.

1-0 scorer J. Henderson are midfielder in Scousers in number 6 best club in PL.

2-0 scorer Kane are center-forward in Spurs in number 4 best club in PL.

3-0 scorer Saka are right-winger in Arsenal in number 1 best club in PL.

2-0 scorer Kane are center-forward in Spurs in number 4 best club in PL.

3-0 scorer Saka are right-winger in Arsenal in number 1 best club in PL.
Click to expand...

You fail, however, to mention England's Jude Bellingham, midfielder, who also plays for Borussia Dortmund. This guy is utter class. He's one of the best - if not THE best - midfielder in the world right now and he's only 19, which is scary for England's opponents. And when he was interviewed after England's 3-0 win against Senegal on Sunday night he sounded like a really lovely guy and sounded like he was far older than he is and spoke with such clarity and intelligence.

If he doesn't win the World Cup this month then he stands a decent chance of being a future World Cup winner.

France will have to be on their guard against him in the Quarter Final on Saturday night. He'll pose a big threat to the World Champions. They'll be wary of him. 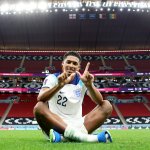 Such a humble guy who doesn't realise what a great player he is at the age of just 19 who seems to love playing for his country. Hopefully he's a future World Cup winner.

What are his thoughts about coming up against France's Mbappe on Saturday night?

The most successful footballing nation on Earth plays the best football at this World Cup to destroy South Korea.

They are ranked No1 in the world and are the World Cup favourites - as is often the case. They will take some beating.

The conquerors of Germany and Spain could not get past Croatia

Spain crash out of the World Cup after a shock defeat against neighbours Morocco.

"Portugal are playing football that only Brazil have matched in this tournament so far."

We now take two days off before the Quarter Finals begin.

If England are to win this for a second time then it looks like we'll have to beat the holders France, then beat Portugal, then beat either Argentina or Brazil.

I was telling my Polish boss in work tonight how I used to have the whole of the 1966 World Cup Final on DVD, the match in which England beat West Germany 4-2.

He then started poking fun at me, basically saying England are rubbish, so I reminded him that Poland are already out of this World Cup and have never won it.

So in the unlikely event he's reading this, here are the highlights of the 1966 World Cup Final, that glorious sunny day on 30th July 1966 on which England won the World Cup. After finishing 2-2 in the 90 minutes, the match went to 30 minutes of extra time. After taking a 3-2 lead in extra time jubilant England fans ran onto the pitch - just as England scored their fourth goal (leading to a bit of commentary by commentator Kenneth Wolstenhome which has gone down in English history: "They think it's all over... it is now!"). Captain Bobby Moore, who died in 1993, was handed the World Cup by Queen Elizabeth II.

Wow. Netherlands equalised against Argentina 11 minutes into injury time at the end of the 90 minutes.

Netherlands Vs Argentina has gone to a dreaded penalty shootout as well.

Oh dear. Argentina have won 4-3 on penalties. The Dutch are in tears.

England Vs France in the Quarter Final tomorrow night.

Unfortunately for France, every time the two nations have met in the World Cup England have won.

Incredibly, it'll also be the first time the two have met in a knockout game in either the World Cup or the Euros.
You must log in or register to reply here.
Top Bottom