What is a piece of hockey history worth? Ontario man looks to sell 19th-century stick

What is a piece of hockey history worth? Ontario man looks to sell 19th-century stick
Wayne Caruk is looking to sell a piece of lumber, a four-foot long vintage piece of Canada’s national pastime that most certainly predates the NHL.
Bruce Deachman
Dec 09, 2020 • Last Updated 11 hours ago • 4 minute read
Wayne Caruk holds his hockey stick, which likely dates back to between 1870 and 1900. Photo by Julie Oliver /Postmedia
Wayne Caruk can’t recall the number of times he’s thought about throwing out the old hockey stick he’s had in his possession for more than 30 years. He never did take it to the curb, however, and is now hoping that decision (or indecision) will pay off.
At 71, the Hastings, Ont., resident is looking to sell the piece of lumber, a four-foot long vintage piece of Canada’s national pastime that most certainly predates the NHL, perhaps by a quarter century or more. If possible, Caruk would like the stick to remain in Canada, ideally in a museum.
The stick found its way to Caruk in the late 1980s when he was a landscaper in Oshawa. A client that he had befriended, a then-80-year-old widow, lamenting that she would have to sell her large King Street house, invited him to look through the years of detritus that had accumulated in her basement and take anything he wanted. The only thing that interested him was a book of Second World War cartoons.
But one day not long after, while Caruck was having tea with the woman, she disappeared to the basement for a moment and returned with the stick. It was her late husband’s uncle’s, Caruk recalls, and she thought her husband would like him to have it.
“I didn’t think too much of it,” Caruk recalls, “but she had tears in her eyes when she was telling me about it.”
Wayne Caruk, left, and Kingston hockey historian Bill Fitsell, with Caruk’s vintage hockey stick. Photo by Courtesy of Wayne Caruk /Courtesy of Wayne Caruk
Caruk took the stick home and pretty much forgot about it. His curiosity about the stick’s possible value was only aroused in 2010, the year of the Winter Olympics in Vancouver, when he saw a television news report of someone who was looking to sell a stick that Caruck thought looked awfully similar to his. Caruk began showing his stick to hockey historians to see what they thought.
One, he says, was London, Ont., historian Brian Logie, whom Caruk visited in 2016, a year before Logie died.
“He told me that the stick was handmade by the Mi’kmaqs in Nova Scotia, probably between 1870 and 1900,” says Caruk. The stick, he adds, was fashioned from hornbeam, or ironwood, a particularly durable hardwood.
The stick was also examined last January by Bill Fitsell, at the time a historian with the International Hockey Hall of Fame in Kingston, who attested to its distinctiveness.
“I have inspected The Caruk Stick twice in the past three years,” Fitsell wrote, “measured and traced it and compared it to other sticks of similar vintage in the 19th century. I deem it ‘unique’ in that it features a rare, knife-blade tip introduced in the 1890 to 1905 period. Weighing just over two pounds, it is a fine sample of the era when hockey sticks were produced by hand in homes and shops. It would make a welcome addition to the library of any serious collector or Museum curator.”
Interviewed in the summer, Fitsell said he viewed hockey sticks of the vintage of Caruk’s from a historic standpoint rather than a monetary one. “They’re an integral part of the history of the game. The stick is the one solid thing we have that tells us about the development and history of the game. Sticks tell a story.”
The blade of Wayne Caruk’s vintage hockey stick. Photo by Courtesy of Wayne Caruk /Courtesy of Wayne Caruk
Phil Pritchard, curator at the Hockey Hall of Fame in Toronto and white-gloved keeper of the Stanley Cup, has also seen Caruk’s stick and says that such artifacts tell an “amazing history about our national sport.
“It’s incredible that they’ve survived. You would have thought that a piece of wood from the late 1800s would have burned in a fire or to keep some house warm, but I’m thrilled they’re still around.
“We all know that the first game was played in 1875, but there’s not a lot about the sticks, the pucks, the sweaters, the skates and things like that, so any time something like that shows up, I think it piques everyone’s interest, but it also adds another story to this chapter of hockey in the late 1800s in Canada.”
The Hall of Fame in Toronto is home to almost 4,000 hockey sticks. Pritchard estimates that about 80 per cent of those are “milestone” sticks, where the person who used it, and when, are identified. The remainder, like Caruk’s stick, help illustrate the game’s evolution. “Wayne’s stick would certainly be a welcome addition to our collection.”
Its value, though, hasn’t been established. Caruk hasn’t had it appraised and cannot estimate its value. But a number of slightly older sticks have commanded handsome premiums in recent years.
Wayne Caruk with his vintage hockey stick. Photo by Julie Oliver /Postmedia
In 2006, the “Rutherford” stick, named for Alexander Rutherford who, in the 1850s, fashioned the stick from a piece of rock elm from his Lindsay, Ont., farm, reportedly sold for $2.2 million before being donated to the Hockey Hall of Fame in Toronto.
In 2015, the Canadian Museum of History paid $300,000 for the “Moffat” stick, the oldest known hockey stick, made from sugar maple in Cape Breton in the 1830s.
The “Morse” stick, found in a Vermont home and carbon-dated to be of 1850-70 vintage, was appraised at $3.5 million U.S. ($4.5 million Canadian) and put up for auction last May, but failed to attract the minimum bid. It is now listed for sale through Artemis Gallery, in Colorado, for $299,995 U.S. ($384,000 Cdn).
Caruk, meanwhile, can be reached at ccaruk@eastlink.ca.
bdeachman@postmedia.com 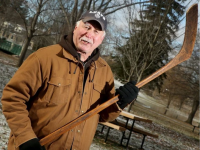 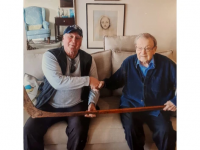 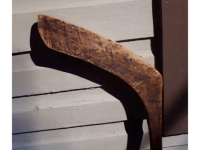 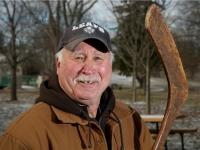 What is a piece of hockey history worth? Hastings man looks to sell 19th-century stick

Wayne Caruk is looking to sell a piece of lumber, a four-foot long vintage piece of Canada’s national pastime that most certainly predates the NHL.