Ukraine have won the Eurovision Song Contest for the first time tonight in Turin.

The country, currently at war with Russia, triumphed in the European music tournament final with the song "Stefania" by Kalush Orchestra.

The United Kingdom, one of the most successful Eurovision nations with five victories and last won it in 1997 but have spent the last 20 years finishing at or near the bottom of the table often with zero points, were winning throughout most of the voting and looking like it was going to get its first victory since 1997, but were just pipped at the post towards the end by Ukraine.

The UK - whose song was "Space Man" by Sam Ryder - finished second, its best performance since 1998.

Having heard the two songs, it's my opinion that had Russia not invaded Ukraine the UK would have won the European Song Contest tonight for the first time in 25 years.

Five time winners UK put in their best performance since 1998 to finish second after many bad performances over the last 20 years or so.

Here is the result of the 2022 Eurovision Song Contest final... 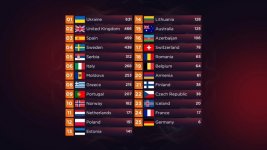 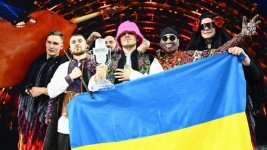 Ukraine's win raises a question over who will host next year's Eurovision ceremony.

The winning country usually stages the show, but Ukraine is unlikely to have that capability.

Its state broadcaster, UA : PBC was targetted in the opening days of the war, and their commentator, Timur Miroshnychenko, had to broadcast his contributions from an underground bunker.

In the past, other broadcasters have stepped in when a country is unable or unwilling to host the contest... most recently in 1980, when the Netherlands took over from Israel, who declined to run the show after winning in two consecutive years.

Eurovision organisers the EBU have just released a statement saying they will consider all options for 2023.

"Obviously, there are unique challenges involved in hosting next year's competition," the statement read.

"However, as in any other year, we look forward to discussing all the requirements and responsibilities involved in hosting the competition with UA : PBC and all other stakeholders to ensure we have the most suitable set-up for the 67th Eurovision Song Contest." 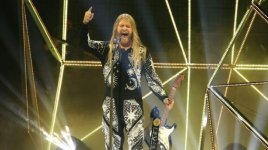 UK entry Sam found fame and a huge fanbase via TikTok after he began posting covers during the first Covid-19 lockdown in 2020.

In a statement, Tik Tok said: “From Sam’s very first TikTok, to his fantastic result at Eurovison, we’ve been fans every step of the way. Our community always knew his star power, his artistic talent and his phenomenal voice, and we’re delighted that the world has seen it too. Congratulations to Sam and all his team on his superb result and of course Ukraine as very worthy winners.”

www.bbc.co.uk
You must log in or register to reply here.
Top Bottom