You are using an out of date browser. It may not display this or other websites correctly.
You should upgrade or use an alternative browser.
P

:lol: :lol: Well last night emma dibbs and mr dibbs watched it for the first time, as they are from britian....evulation: They liked it 8O :wink:
N

Last weeks eppy was a bit better. But there is something "missing" from previous seasons. Maybe they are getting to "smart"?
N

I see now they are making a feature movie to be released in July 2006 in theatres. They are starting to film the movie this summer.

TPB is easily my most favourite show. Ricky is my favourite, he is perfect... why, he was perfect even before he got his Grade Ten, and even not having a mentor and all....

There is a new pseudo-documentary out called 'Incident at Loch Ness' or some such thing, and in it, the producer is EXACTLY like Ricky if Ricky actually got a job as a director. Very funny little flick. Good one way or another, but especially good if you want a glimpse of Ricky As Producer.

I heard about the movie coming out! I hope they do a good job on It.

It sucks though I haven't seen TPB for almost a year now. We moved out into the Country and only have peasantvision. (Fuzzy CBC)

:wink: It makes the kids stay outside longer though.
T

Re: Trailer Park Boys-win a walk on role for TPB tv series

TPB rock. they are filming a full length feature in june with ivan reitman as executive producer...check out this website: www.livethedream.ca i just purchased a lottery ticket to win a walk on role for the TPB tv series. its a fundraiser for a non-profit film cooperative in halifax ns. june 3rd is the draw date...i purchased my tickets through pay pal. use info@livethedream.ca as the email address for purchase. good luck...
www.livethedream.ca
tpb fan

That show rocks, another of Canada's finest, Yo!
T

fyi
u can win a walk on role for the TPB TV series. i just purchased lottery tickets on www.livethedream.ca it's a fundraiser for a non profit film coop in halifax ns. u can purchase tickets through pay pal.
www.livethedream.ca
peace out
N

Oh How the time flies. The season finale is on at 9 pm tonight on Showcase.......Looks pretty good from the previews.

I wonder if they will do a 6th season, since they are filming a movie for theatrical release next July?
Y

Well, I have a relative that lives in the trailer park they originally filmed in! They have now built their own trailer park set in Dartmouth, I was there in May.

Jo Canadian said:
I heard about the movie coming out! I hope they do a good job on It.
Click to expand...

I heard that last night...hope it comes out soon.


Jo Canadian said:
We moved out into the Country and only have peasantvision. (Fuzzy CBC)
Click to expand...

Well I sure hope it's better than their first movie :? That one sucked
L

I found a Trailer Park Boy soundboard it's called the Jim Lahey Shit Board it's located at: www.newgrounds.com/portal/view/244488
see ya! 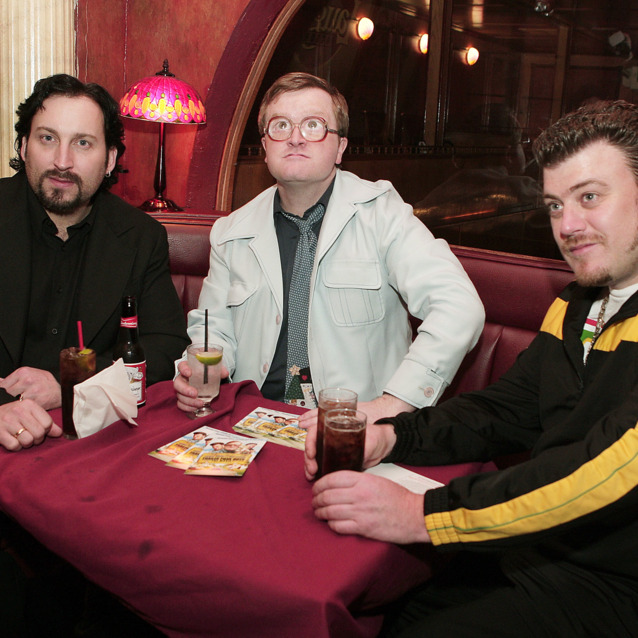 Trailer Park Boys star John Dunsworth, known as Mr. Lahey, dead at 71
By Mark Daniell, Postmedia Network
First posted: Monday, October 16, 2017 06:57 PM EDT | Updated: Tuesday, October 17, 2017 07:17 AM EDT
John Dunsworth, the actor who played Jim Lahey on “Trailer Park Boys,” has died at age 71.
The news was confirmed on Dunsworth’s official Twitter account with a message that was posted Monday night.
“With heavy and broken hearts the family of John F. Dunsworth would like to let people know that our amazing husband, father and grandfather John Dunsworth has passed away. John left this world peacefully after a short and unexpected illness.”
The family has asked for privacy at this time.
Lahey was a trailer park supervisor who was in a relationship with Randy. He was oftentimes drunk and battled Bubbles, Julian and Ricky. Some of his most famous catchphrases included, "Your s----goose is cooked" and "I am the liquor."
A post on the “Trailer Park Boys” Twitter page Monday evening said: "We're in shock and heartbroken by the sudden loss of our dear friend John Dunsworth. We respect the family's wishes for privacy at this time."
Bubbles, played by Mike Smith, tweeted, "I am beyond devastated. John was a beautiful guy. Brilliant and fascinating. I am forever grateful for having known him. RIP my friend."
Dunsworth, originally from Bridgewater, N.S., played Mr. Lahey on the Trailer Park Boys since the show began in 2001. He was also known for playing reporter Dave Teagues on the supernatural drama series, “Haven.”
In a 2010 interview with the Sarnia Observer, Dunsworth joked that he was nothing like his famed Trailer Park Boys character.
"I've been drunk maybe five times in my life but all by mistake. Why would anyone give up their equilibrium and fall over and puke on themselves? Why would anyone want to do that?"
Jonathan Torrens, who played J-Roc on the series, said on Twitter that “Dunsworth was all our father on set yet the biggest kid at heart” and that he was “curious, mischievous and spirited.”
Series co-star Lucy DeCoutere described Dunsworth on Twitter as a “word scrambler, craftsman, surrogate dad, mischievous and forever curious. He made me try harder, dig deeper,” she added.
Actor Bernard Robichaud, who portrays Cyrus on the show, called Dunsworth a Canadian icon.
“My theatre teacher, a loving father, husband, and a friend to many, you will be greatly missed,” he wrote on Twitter.
“Trailer Park Boys” director Mike Clattenburg said via Instagram that it is “sad news” to lose Dunsworth.
“His wild passion for acting was matched by his love of life and family. One of Canada’s greatest.”
Members of legendary Canadian rock band Rush, who appeared as guest stars on the show, posted a message on Twitter saying it was “heartbreaking” to hear of Dunsworth’s death.
“He was truly a great actor and sweet man — kind and considerate of all those around him.”
Rush guitarist Alex Lifeson added, “My sincere condolences to Sarah and family.”
American comedian Tom Arnold also expressed his sympathies, writing on Twitter: “So sad. RIP John Dunsworth. One of the finest men and most brilliant actors I’ve ever had the honour to work with.”
Fans were recalling some of his most notorious moments on the “Trailer Park Boys,” including when Mr. Lahey declared: “I am the liquor.”
Dunsworth was also known for playing reporter Dave Teagues on the supernatural drama series, “Haven.”
- With files from Canadian Press 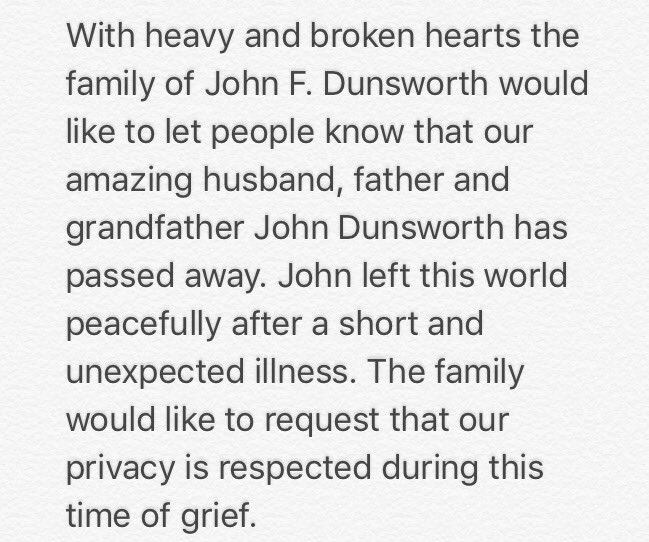 Trailer Park Boys' star John Dunsworth will be missed
By Liz Braun, Toronto Sun
First posted: Tuesday, October 17, 2017 05:14 PM EDT | Updated: Tuesday, October 17, 2017 05:44 PM EDT
Let’s have a little drinky-poo in honour of John Dunsworth.
The actor best known as Jim Lahey — inebriate manager of Sunnyvale Trailer Park in dirty Dartmouth, N.S.— died Monday at age 71.
It’s a hell of a shock to fans of the Trailer Park Boys.
Dunsworth’s daughter, Sarah, said the actor died peacefully after a short and unexpected illness, with no further details given.
All of Canada is in mourning.
A brilliant comic actor, quick with a pratfall or an alcohol-fuelled stumble, Dunsworth was an accomplished theatre vet with the sort of intellect that made him a legend at the bridge table and the Scrabble board.
In real life, he didn’t drink.
Born in Bridgewater into a family of 10 kids, Dunsworth found acting by the age of 20 and became a beloved member of Nova Scotia’s acting community. He had dropped out of Dalhousie and moved west, eventually enrolling at the University of Guelph and finding the drama course that changed his life.
Dunsworth discovered that the collaboration involved in acting suited him right down to the ground. As he once told a Toronto TV writer, “I think maybe I was looking for that collective support you get in a big family. And I found it in acting.”
An award-winning stage actor, Dunsworth has also appeared in countless radio dramas and in such TV shows as Forgive Me, Haven, Lexx and Pit Pony — where he helped discover then child-actor Ellen Page. He made his film debut in 1987 and appeared in all the Trailer Park movies as well as in such features as New Waterford Girl, The Shipping News, Virginia’s Run and Weirdos.
Thanks to the Trailer Park Boys, a TV show seen globally and translated into dozens of languages, a very specific subsection of Canadian humour became known around the world.
On the show, John Paul Tremblay (Julian), Robb Wells (Ricky) and Mike Smith (Bubbles) play hard-drinking, chain-smoking, vaguely criminal dolts who speak in an exaggerated east coast vernacular and sprinkle their dialogue with fantastic malapropisms.
As Mr. Lahey, the park manager, Dunsworth was the closest thing to a villain on Trailer Park Boys. He engaged in endless plotting against his trouble-making tenants, despite a general state of leglessness that led him to pronounce, “I am the liquor,” and other mystical insights born of booze.
Lahey was a bisexual former cop with a lover/mentor relationship with the perennially shirtless Randy (Patrick Roach); it’s almost impossible to explain why these gormless tough guys so touched the national funny bone, but we’ve seen grown men weep with laughter at the Trailer Park Boys.
Laugh with them, actually — not at them.
As for those who found the entire Trailer Park Boys concept a bit tasteless?
Frig off, as Randy would say.
And rest in peace, John Dunsworth.
Trailer Park Boys' star John Dunsworth will be missed | BRAUN | Celebrities | En
You must log in or register to reply here.
Top Bottom