Toronto updating its number of neighbourhoods to 158

Toronto updating its number of neighbourhoods to 158
Population growth has made each neighbourhood’s population "unbalanced," the city says


“Toronto’s existing 140 social planning neighbourhoods have been in existence since the late 1990s,” the city’s website reads.

For instance, for the over 65,000 people living in what’s currently known as “Waterfront Communities — The Island,” that massive block of land will now split into three different areas: Harbourfront-CityPlace, St. Lawrence-East Bayfront-The Islands, and Wellington Place.

Meanwhile, the current “Niagara” neighbourhood will be broken down into West Queen West and Fort York-Liberty Village.

The jump in population, according to most recent Census data in 2016, showed Toronto had increased by 116,511 in the five-year period since 2011. The next Census survey is scheduled for May.


Among the changes include two neighbourhood improvement areas being split — Woburn 137 will be Woburn North 142 and Golfdale-Woburn, and Downsview-Roding-CFB is now Downsview and Oakdale-Beverley Heights.

The new 158 neighbourhoods will be publicly announced in early 2021, the city said, but no definite date has been determined. 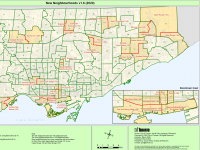 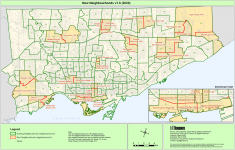 The next census will take place in May 2021. Learn more about how and why it is conducted, and how it was adapted to the COVID-19 pandemic.

Toronto updating its number of neighbourhoods to 158