TICK TICK TICK: Rare bacterial disease on the rise in Ontario
Anaplasmosis is caused by a bacterium that is spread by the same blacklegged ticks that are responsible for Lyme disease.


She eventually ended up in isolation at the Kingston Health Sciences Centre, hooked up to oxygen and barely aware of her surroundings, while doctors tried to figure out what was making her so sick.

After four more negative tests, doctors were convinced it wasn’t COVID-19, but they weren’t sure what it was.

One of her doctors told Hinther they were trying another test, adding: “I am not making any promises.” But he was soon rushing back into her hospital room, saying, “We found it!”

What they found was anaplasmosis — a disease caused by a bacterium that is spread by the same blacklegged ticks that are responsible for Lyme disease.

A blacklegged tick.
A blacklegged tick. PHOTO BY ANTONELLA ARTUSO /Antonella Artuso/Toronto Sun
This tick-borne illness is fatal in about one per cent of cases, according to the U.S. Centres for Disease Control. People over 60 and those who don’t get treatment quickly are most at risk for severe outcomes. It is treatable with doxycycline, the same antibiotics used to treat Lyme. It is rarer than Lyme disease. But doctors in Kingston, like health officials south of the U.S. border, are seeing a sharp rise in cases this year.

Article content
It is one more serious reason to take precautions to avoid being bitten by ticks.

“It was one of the scariest things I have ever been through,” says Hinther, who is now home recuperating.

Warming winters, which have contributed to a rise in ticks that carry the bacterium Borrelia burgdorferi that causes Lyme disease, are also contributing to more cases of anaplasmosis, which can be the result when people and livestock are bitten by ticks carrying the bacterium Anaplasma phagocytophilum.

Until recently, it was practically unheard of in Ontario.

Researchers, including Dr. Gerald Evans, an infectious disease specialist at Queens University and Kingston Health Sciences Centre, reported the first known human case acquired from a blacklegged tick in Ontario in just 2018. The first cases reported in the U.S. date back to 1994, in Minnesota and Wisconsin.

Article content
Until Ontario’s first case was identified, doctors had only seen cases in people who had travelled to parts of the U.S. where cases were more common.

But that has changed this year. Doctors are seeing more cases of anaplasmosis than ever before during a year in which people are not travelling — meaning all of the cases were acquired by tick bites near home.

“There has been a rise in cases. Anecdotally my colleagues and I are seeing a larger number than in past years,” said Evans. Kingston is one of Canada’s hot spots for the ticks that carry Lyme disease.

“This is the first year I can remember that we have seen multiple cases in a relatively short period of time.”

Hinther says one of her doctors told her that he had never seen a case until this year. And he has seen one a week.

Article content
Health officials in upper New York State, where the illness is reportable, have also seen a spike in cases this year. As of early July, cases in Warren County, New York, not far from the Canadian border, had quadrupled from a year earlier.

Officials there say it is one more reason to take precautions to avoid tick bites. That could be even more important with the rise of anaplasmosis. While ticks generally have to be attached to a person for more than 24 hours to transmit Lyme disease, there is evidence that transmission of anaplasmosis can occur in a shorter period of time and there is no telltale rash left behind. Ticks can be as small as a poppy seed.

Hinther was never aware of having been bitten by a tick.

Ottawa Public Health says it does not know of any human cases in the city, although there is no requirement for cases to be reported to public health, as there is with Lyme disease. That could change if anaplasmosis becomes more common in Ontario, said Evans, and public health officials see a need to track cases.

Article content
Ottawa is considered an at-risk area for Lyme disease. Recent research from uOttawa found that one in three blacklegged ticks tested in the city were positive for Lyme disease.

Evans said Lyme and anaplasmosis present quite differently. Lyme disease can appear more subtly, usually beginning with a rash, most often in the shape of a bulls-eye. Symptoms include joint and muscle aches, fatigue, headache and low fever. In later stages, Lyme can lead to cardiac and neurological problems, among other things.

Hinther, 69, a multimedia artist who is known for her cards, calendars and stained glass, is now at home after more than a week in hospital.

“I don’t think you realize how sick you were,” he said to her. “We thought we were going to lose you.”

Hinther is determined to warn others to protect themselves and meticulously check for ticks to avoid a similar ordeal.

“I have been to hell and back,” she said. “I just want people to know it could happen to you if it happened to me.” 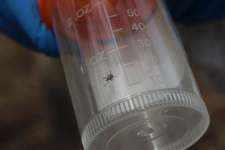 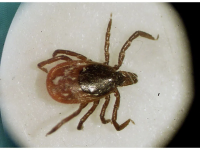 ‘One of the scariest things I have ever been through’: Rare tick-borne disease on the rise in Ontario

Anaplasmosis is caused by a bacterium that is spread by the same blacklegged ticks that are responsible for Lyme disease.