The true story of the Sutton Hoo treasure ship

The true story of the Sutton Hoo treasure ship: How experts discovered 86ft Anglo-Saxon vessel loaded with artefacts in Suffolk as Europe was plunged into chaos on the eve of WWII​ 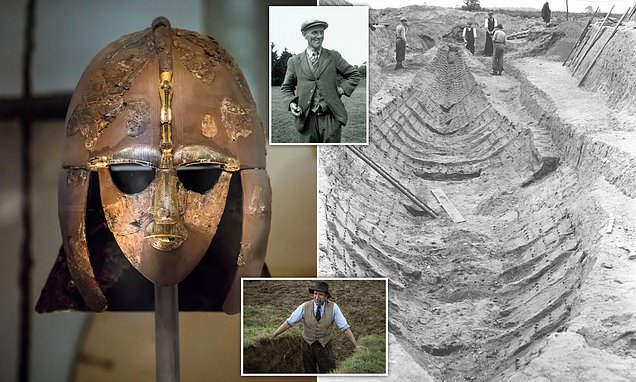 A film has been made about the excavation of an Anglo-Saxon burial ship in Sutton Hoo, Suffolk, in 1939 (picturd right). Based on a historical fiction novel written by John Preston, the nephew of one of the archaeologists involved in the discovery, The Dig follows the uncovering of the 7th-century treasure haul. But the true story of the world renowned archaeological find is just as fascinating as fiction. Amateur archeologist Basil Brown (inset top), played by Ralph Fiennes (inset bottom) in the upcoming Netflix film, first discovered the ship when he found patches of hard earth stained with rust and interspersed with metal rivets. More than 260 items of treasure were later recovered from the boat, including weapons, armour, coins, jewellery, gold buckles, patterned plaques and silver cutlery. The most precious find of all was a sculpted full face helmet (pictured left), leading archaeologists to conclude the site was the final resting place of a 7th Century royal, probably Raedwald, a king of East Anglia. 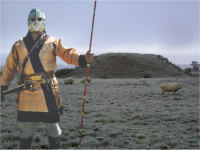