The Scottish National Party is against Scottish independence

Genuine Scottish nationalists would be Brexiteers...

The SNP is against national independence

The upcoming General Election has put the question of Scottish independence and, with it, the future of the Union, centre stage. So for the Scottish National Party leader, and Scottish first minister, Nicola Sturgeon, an SNP victory would represent an ‘unequivocal and irresistible demand’ for a second independence vote. She later added that any party wanting SNP support to form a government, shouldn’t ‘pick up the phone’ without first agreeing to a second referendum on Scottish independence. Being the opportunist that he is, Labour leader Jeremy Corbyn was first to make that call.

The possibility of an SNP-Labour election pact has prompted a social-media frenzy among nationalists on the viability of a Corbyn government as a potential route to independence. No doubt, if Labour fails to get elected, those same nationalists will be the first to vilify those English, Welsh and Northern Irish voters for doing the very thing they themselves do – not vote Labour.

However, a possible deal with a Labour government will do little, if anything, for Scottish independence. The barrier to independence lies much closer to home. If Scottish nationalists are serious about independence, they must reject the SNP’s narrow demand for secession from the Union, and forego their opposition to the result of the 2016 EU referendum, when 52 per cent of the British electorate voted to leave the European Union. The defence of the British Union’s democratic mandate to leave the EU is an essential precondition to any subsequent and meaningful, collective demand for Scottish self-determination. That’s because one cannot deny sovereignty in one instance (Britain), while demanding it in the other (Scotland). The defence of British sovereignty is the principle from which all other claims to sovereignty follow.

Concerned that Sturgeon is playing fast and loose with the Union by exploiting misgivings towards Brexit, Scots openly in favour of the Union have largely resorted to bouts of anxious handwringing. Their pessimism, however, fails to recognise that the Scottish electorate is far more passionate about the question of the Union than they are about staying in the EU.

Scotland is not the Remainer utopia that Sturgeon would have us believe. The question of the Union is a far more pressing concern for the Scottish electorate than EU membership. In the 2016 referendum, some 1,661,191 Scots voted to remain in the EU. However, in the 2014 Scottish Independence Referendum, 2,001,926 Scottish voters rejected Scottish independence and voted to stay in the Union. As one might expect, however, the SNP claims that somehow the 1.6million Remainers in Scotland trump the two million pro-Unionists.

This claim becomes even more shallow when one considers the respective turnout in both referendums. The 85 per cent turnout for the Scottish Independence Referendum, was, at the time, the highest recorded for an election or referendum in the UK since the 1910 General Election. When compared with the 67 per cent of Scots who turned out to vote in 2016, it illustrates the failure of the SNP and other anti-Union parties to cohere a progressive nationalist vision for Scotland, and underlines that the Union is a far more pressing issue than remaining in the EU. This is further compounded by the fact that a paltry 39 per cent of Scots could be bothered to drag themselves to the polls for the 2019 European Parliament elections.

So, while the SNP leadership might be hot for the EU, the Scottish people are decidedly cooler. Sturgeon’s claim that Scotland is being forced to leave the EU ‘against our will’ is not an entirely accurate assessment. There is a significant minority within the SNP who recognise this. Over a third (36 per cent) of SNP members resisted the official party line and voted for Brexit. YouGov polling suggests that there has been a significant swing among those who voted for independence in 2014, but supported the Leave campaign in 2016, towards support for the Union.

One of the SNP’s major problems is that it is not a nationalist party in any meaningful sense. Sturgeon has admitted as much. In May 2017, she signalled a clear attempt to distance the SNP from a nationalist programme. Acknowledging the ‘hugely, hugely, problematic’ connotations the term has for the SNP project, she expressed a desire to expunge the word ‘national’ from the party name – a telling snapshot of Sturgeon’s very real anti-nationalist agenda.

The SNP consistently foregoes any attempt to formulate a political project around which it could forge a collective sense of Scottish nationhood. Instead, it seems intent on alienating itself from the Scottish population. Its first impulse has long been to attack the freedoms of the Scottish people. The SNP’s anti-smacking legislation is just the latest in a long line of increasingly intrusive, authoritarian legislative attacks on the lives and liberties of ordinary Scottish people. No wonder the SNP is so keen to see an independent Scotland remain in the EU and undermine the political and civil rights of the Scottish people. It does not trust the Scottish people to govern themselves.

In fact, the SNP has no real interest in Scottish claims to independence. Scottish nationalism deserves better. If independence is to have real significance, rejecting the anti-Union, anti-Brexit politics of the SNP would represent the first necessary steps towards a meaningful, people-centred movement for Scottish self-determination.

Carlton Brick is a lecturer in sociology at the school of media, culture and society, University of the West of Scotland.

LONDON — The U.K. Supreme Court ruled Wednesday that Scotland does not have the power to hold a new referendum on independence without the consent of the British government.


The judgment is a setback for the Scottish government’s campaign to break away from the United Kingdom.


Scottish First Minister Nicola Sturgeon said she would respect the ruling but continue the fight for independence, saying Scotland’s “democratic right to choose our own future” was at stake.

The top court ruled that the Scottish Parliament “does not have the power to legislate for a referendum on Scottish independence.”

Supreme Court President Robert Reed said the five justices were unanimous in the verdict, delivered six weeks after lawyers for the pro-independence Scottish administration and the Conservative U.K. government argued their cases at hearings in London.

Independence supporters plan to rally outside the Scottish Parliament in Edinburgh and at other sites later Wednesday.


The semi-autonomous Scottish government wants to hold a referendum next October with the question “Should Scotland be an independent country?”

The U.K. government in London refuses to approve a vote, saying the question was settled in a 2014 referendum that saw Scottish voters reject independence by a margin of 55% to 45%.

The pro-independence government in Edinburgh wants to revisit the decision, though, arguing that Britain’s departure from the European Union — which a majority of Scottish voters opposed — has radically changed the political and economic landscape.

Sturgeon argues that she has a democratic mandate from the Scottish people to hold a new secession vote because there is an independence-supporting majority in the Scottish Parliament.


During Supreme Court hearings last month, Dorothy Bain, the Scottish government’s top law officer, said the majority of Scottish lawmakers had been elected on commitments to hold a fresh independence referendum. She also said a referendum would be advisory, rather than legally binding — though a “yes” vote would create strong momentum for Scotland to break away.

U.K. government lawyer James Eadie argued that power to hold a referendum rests with the U.K. Parliament in London, because “it’s of critical importance to the United Kingdom as a whole,” not just Scotland.


Reed stressed that the court was “not asked, and cannot be asked, to express a view on the political question of whether Scotland should become an independent country.”

The British government urged politicians in Scotland and London to move on and focus on pressing issues such as a struggling economy and a cost-of-living crisis.

Scottish Secretary Alister Jack said “people in Scotland want both their governments to be concentrating all attention and resources on the issues that matter most to them.”

“A so-called partnership in which one partner is denied the right to choose a different future â¦ cannot be described in any way as voluntary or even a partnership at all,” she said. She ruled out holding an unauthorized referendum, saying “the route we take must be lawful and democratic for independence to be achieved.”


Sturgeon said she would make the next U.K. national election, due within two years, a de-facto plebiscite on ending Scotland’s three-century-old union with England. She said the SNP would hold a special conference next year to work out details of that plan.

Polls suggest Scots are about evenly split on independence — and also that a majority of voters do not want a new referendum anytime soon.

Scotland and England have been politically united since 1707. Scotland has had its own parliament and government since 1999 and makes its own policies on public health, education and other matters. The U.K.-wide government in London controls matters such as defense and fiscal policy. 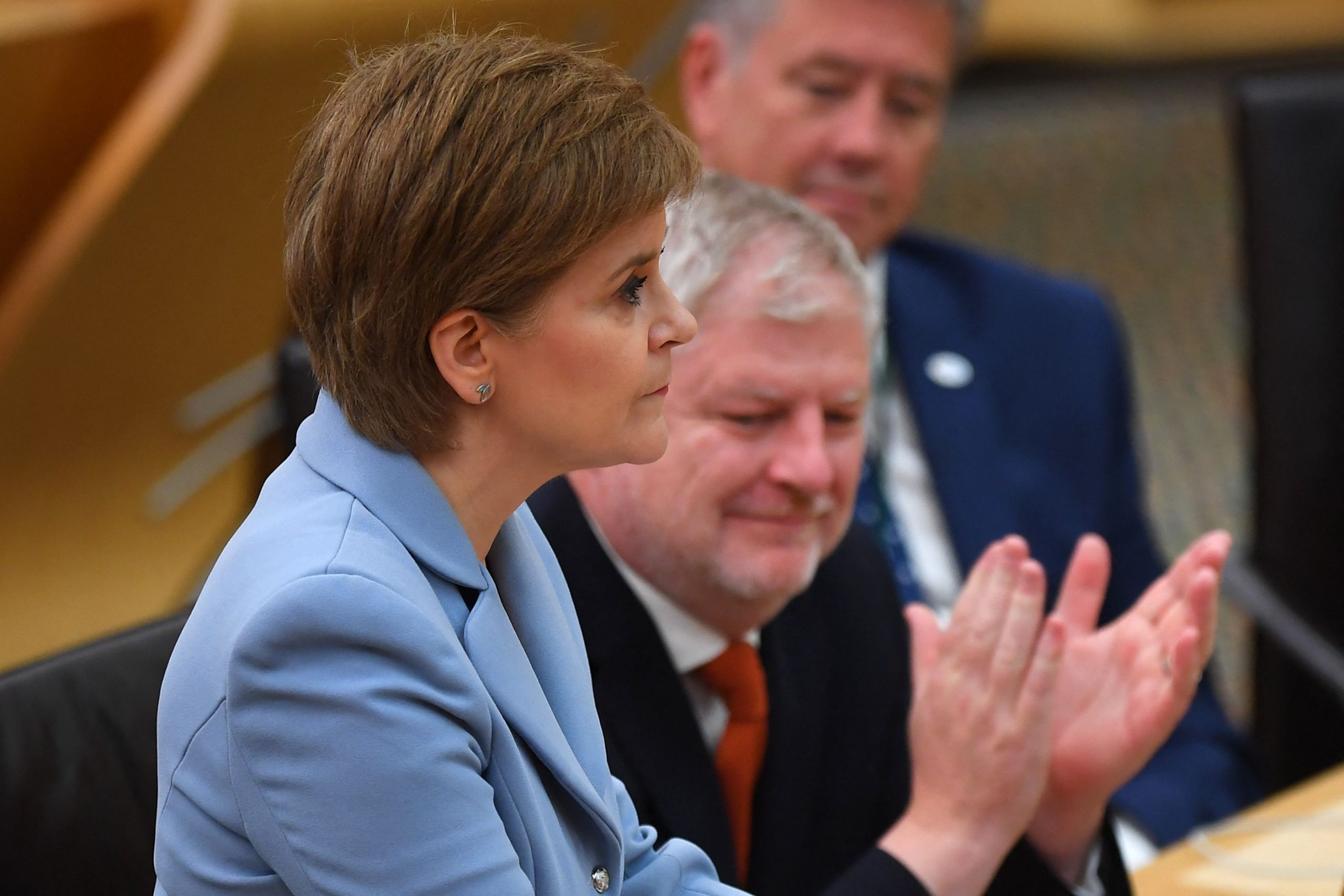 The U.K. Supreme Court ruled that Scotland does not have power to hold a new referendum on independence without the consent of the British.

Why would Scotland want to get rid of England? Scotland has owned England since 1603, when James VI, King of Scotland, became James I, King of England.

There ensued the United Kingdom, which exists under benevolent Scots rule to this very day (well, except for the German on the throne).
You must log in or register to reply here.
Top Bottom