The M6 is Britain's most haunted road. 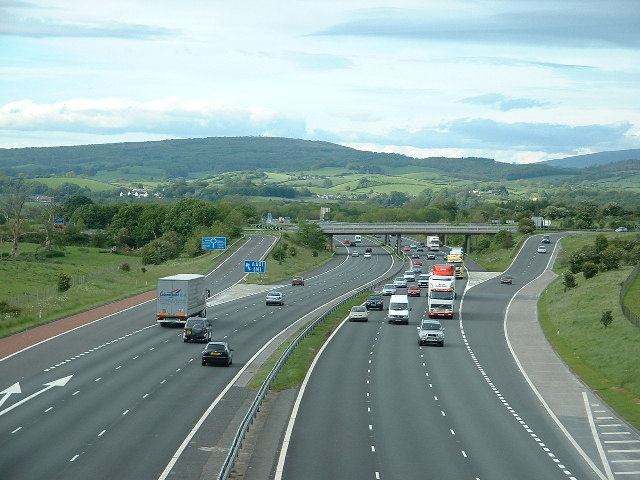 The M6 motorway is Britain's longest motorway. It's also the most haunted. It runs from Warwickshire right up to near the English/Scottish border. Some of the ghosts seen on this road include Roman soldiers. Platt Lane in Manchester, the site of a coal mining disaster many years ago, even has eyes looking out from bushes.

The M6 has been named Britain's most haunted road in a new Halloween survey.

The M6's spooky reputation follows with reports of phantom Roman soldiers, a ghostly woman and a lorry driving against the flow of traffic.

Motorists have also reported eyes looking out from bushes in Platt Lane, Leigh, Manchester - the scene of a mining disaster years previously.

The A9 in the Highlands was the second most haunted after a family reported seeing an ornate coach and horses, along with bewigged footmen.

The road appears again at number eight in the list, produced by Tarmac, following a sighting of a Victorian-clad man on a horse at The Mound between Dornoch and Golspie.

There were reports of a phantom dog on Great Yarmouth High Street and ghostly children playing in Gloucester Road, Finsbury Park, north London.

A guardian angel voice allegedly alerted a woman driver of an out-of-control car on the B4293 in Devauden in Wales and a lady in Victorian dress was reportedly spotted on the B3314 near Tintagel in Cornwall.

Tony Simmons, sightings co-ordinator for Tarmac, said: "We compiled the top 10 on the basis of the clarity of sightings rather than just the number of spooky experiences.

"At this time of year it's easy to mistake swirling mist for something more sinister and we wanted to make sure we were listing truly spooky sightings."


The spooky top ten in full:
1 The M6
2 The A9 in the Scottish Highlands
3 Platt Lane, Leigh, Manchester
4 High Street and Suffield Road in Great Yarmouth
5 Gloucester Drive, Finsbury Park, north London
6 The B4293 at Devauden, Wales
7 The B3314 near Tintagel, Cornwall
8 The Mound, on the A9 near Dornoch
9 The B1403 near Doncaster, South Yorkshire
10 Drews Lane, Ward End, Birmingham

[[Britain is reputed to be the most haunted country in the world, with the British Tourist Board calculating that there are at least 10,000 haunted places in Britain (so, being only the size of Oregon, haunted buildings are places are all around us) " with any number of strange spectres, wailing women, and any number of headless horsemen galloping gamely across highlands, heaths and moors." ]]

LONDON (CNN) -- Britain has apparitions the way other countries have apple trees.

That's because, compared with the New World, Britain has a much longer and deeper history. And the has United Kingdom has had plenty of time to cultivate spooks and goblins.

Consider the Drury Lane Theater. Over three centuries, it has collected an entire cast of ghosts, actors, actresses, children and old staff members.

"You've also got the man in gray, you've got this little child ghost, you've got a lady that walks around underneath the stage. We still haven't found out who she is," said tour supervisor Alex Keir.

And there's Grimaldi, the famous 19th Century clown, who loved the Drury Lane Theater so much he still chills out down there.

"Many actresses and actors have said they've felt him pushing them, kicking them, tripping them up, slapping them on the back," said Keir.

But there's a mystery within a mystery about the "Man in Gray", who was murdered after a card game 150 years ago and entombed behind a London bar.

"He's seen with a gray tricorn hat on, a gray frock coat and riding boots," said Keir. "He actually sits on a Friday afternoon in Row D, Seat 1 and watches the rehearsal."

http://www6.cnn.com/EVENTS/1996/halloween/images/halloween.banner.gif
You must log in or register to reply here.
Top Bottom